‘George goes dairy farming’: ‘We’ll go another row and see how we go; the land is there’

In the final episode of ‘George goes dairy farming’ – an innovative series brought to you by AgriLand and Progressive Genetics – Co. Wicklow-based farmer, George Beattie, is back in the model county to visit the farm manager of Pollard’s Farm – Kevin O’Hanlon.

On the farm in Co. Wexford, Kevin is milking 180 Holstein Friesian cows under a spring and autumn-calving system, which is split 85% calving in the springtime, while the remaining 15% calve down in the autumn.

However, going forward, the herd will be split 50:50. While a lot of Irish dairy farmers have moved away from winter milk production, there is plenty of labour available on the farm which will suit this system.

Also, there is a lot of scepticism about the use of sexed semen on dairy farms in Ireland. Despite this, Kevin has had much success with this technology in recent years.

In terms of performance, in 2019, 600kg of milk solids were produced per cow, with a six-week calving rate of 60%. Additionally, the calving interval stood at 395 days and the herd has an average EBI of €114.

In the video (below), earlier this spring, George caught up with Kevin to drill deeper into his successful system and to find out what works best and why.

Also, as this is the final instalment of the series, George outlines what he has learned from visiting some of the best and most progressive farmers in the country, while developing his own recipe for success.

Give us an overview of the herd and what system are you working down here?

With the labour units that are here and the man power that is here, we’ll milk through.

In terms of winter milk production, a lot of people are running away from this. However, you seem to be running a good system here. Is it worth your while?

Yes, I find it’s worth it. Calving cows in March and drying off at the beginning of December – I don’t really understand it.

She [the cow] is standing there for three months of the year – doing nothing and eating stuff, so she might as well be producing milk.

What kind of bulls are you using on the herd?

This year, mostly Holstein. Then there are a few Norwegian Reds to bring back down the Holsteins. I suppose that’s the general run of it.

The herd is a mix of high-EBI, Type and Norwegian Red. This year’s bull team includes:

Some bulls used in previous years include: 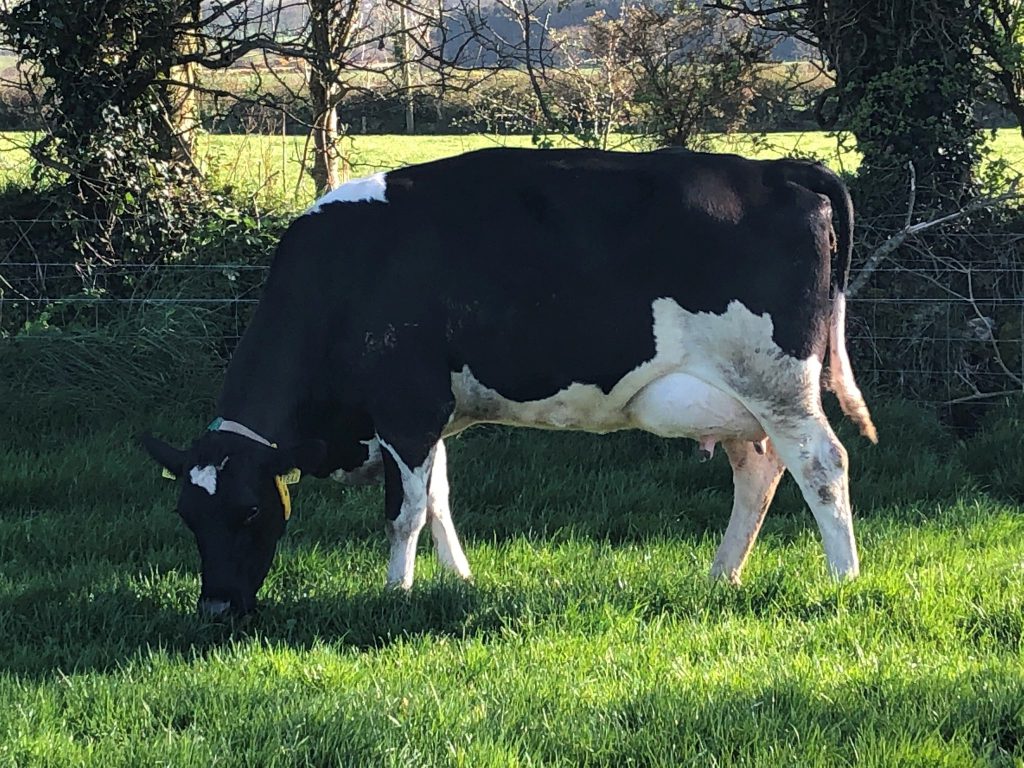 In terms of somatic cell count (SCC), you’ve set the benchmark at 140,000cells/ml, how are you finding the cows that you didn’t use Selective Dry Cow Therapy (SDCT) in?

We had two cows that got mastitis in one quarter; some of the cows were dried off too-high and we couldn’t get them back down in yield.

One of them was actually one of the higher yielders and we could not get her back down and she just stayed milking off her back on straw.

But the selective dry cow comes through this time of year; they’re quicker back into the tank and we had no real issues with it.

In terms of milk recording, how simple is it or is it an inconvenience?

No, there’s no difference – especially now that it’s a computerised recording. Caroline [the milk recorder] comes in at whatever time we’re milking at in the evening and she’ll take her samples and you wouldn’t even know she was in the parlour.

She takes down the yield off the screens up along and the next morning there’s no milk sample; it’s just to record the milk yield and the cow’s number.

Last year, the herd was recorded 11 times in order to get a really good handle on SCC for SDCT.

Do you freeze brand the herd? How does it work and when do you do it?

Yes, we freeze brand everything because it’s just easier; if you’re in the field, you don’t have to go up to the cow.

If the cow is bulling and you want to see what cow it is, with the freeze brand, you can read them from whatever distance away that your eyesight is good enough. 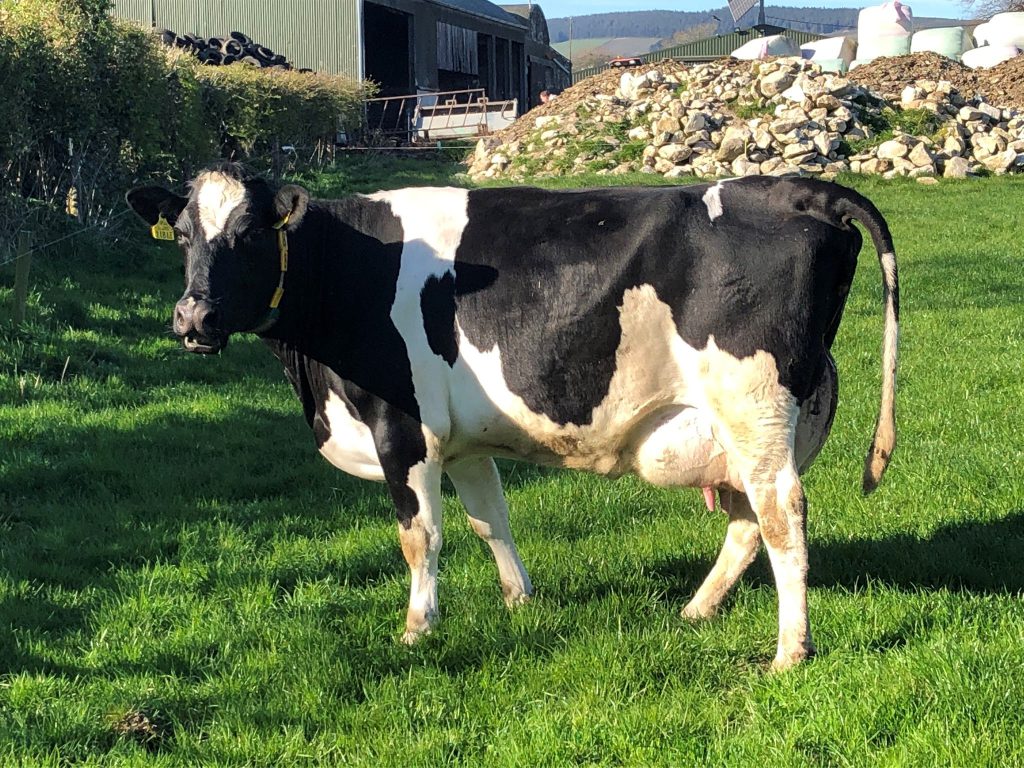 It’s a lot easier than trying to read a tag. We do it every two years. We do the first calvers and the maidens, so we don’t do it every year – it’s every second year.

Talk to me about the feed-to-yield system, when did you start doing that?

We started using the feed-to-yield system in 2015. The biggest benefit of it is getting cows back in calf from the point of view that the cows with the better yield are getting fed properly to produce that milk.

They’re not getting it off their back because they will if you have a higher-yielding cow. If she’s not getting it through her mouth – she will take it off her back.

Yes definitely. We were feeding a 4kg flat rate across the board, but now there are cows on 2kg because I know they will milk off grass.

The cows that will do it off grass get their 2kg/day when they come into the parlour.

In terms of herd size, you’re milking 180 at the moment, are you looking to push on from there?

We’ll go another row and see how we get on. The land base is there to hold more, but we dry up in the middle of the summer, so we have to be careful with that as well and that we don’t bite off more than we can chew. 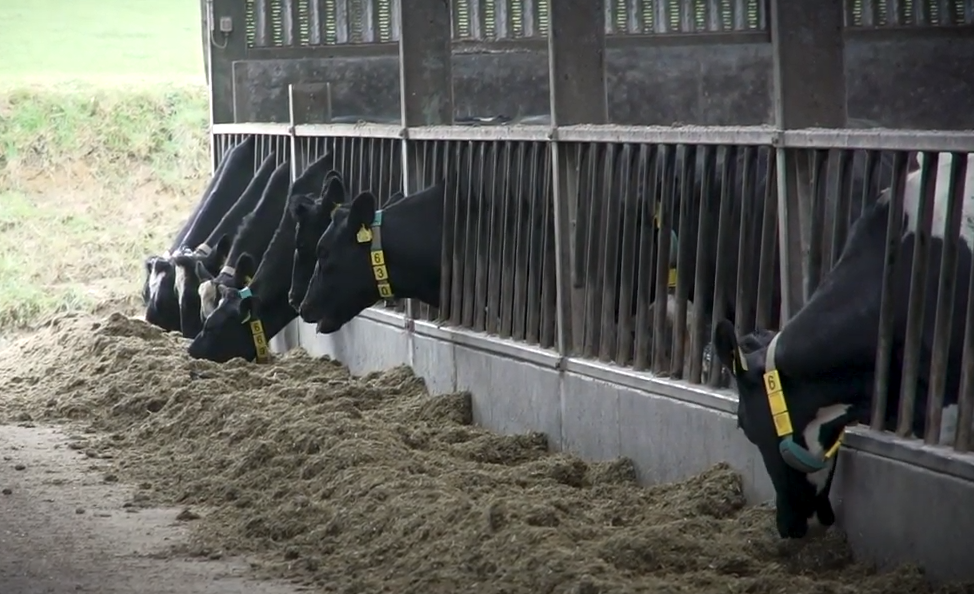 Do you grow your own fodder on the farm?

We do. We grow all the silage here obviously. Last year was the first year we didn’t grow our maize – we contracted it out.

We grow approximately 60ac of barley and that’s kept for feeding, while the straw is kept for bedding. We grew a bit of wheat as well last year which was used for the diet feeder.

The reason we grow barley is to freshen up the land and, secondly, all our replacement heifers are out-wintered, so the calves will go out at three months-of-age and won’t come back in until they are 21-22 months old.

You’ve used sexed semen across the herd and you’ve had pretty good results, how did you do it? Have you used it on heifers?

We used it on the mature herd last year; we didn’t do any heifers and we got 49% conception rate.

We did use it on heifers. We used it two and three years ago. It’s just the fact that last year different things were happening and we had the Angus bull, so we just let him off with them last year.

This year we will be going with sexed semen for all the heifers.

You’re on the top of your game in terms of heat detection, will you find it more difficult to heat detect the heifers?

We estrumate the heifers to bring them in in batches, then they’re AI’d in batches and they’re then matched so that the first group we do are repeating with the second group we do; so they’re coming back in. 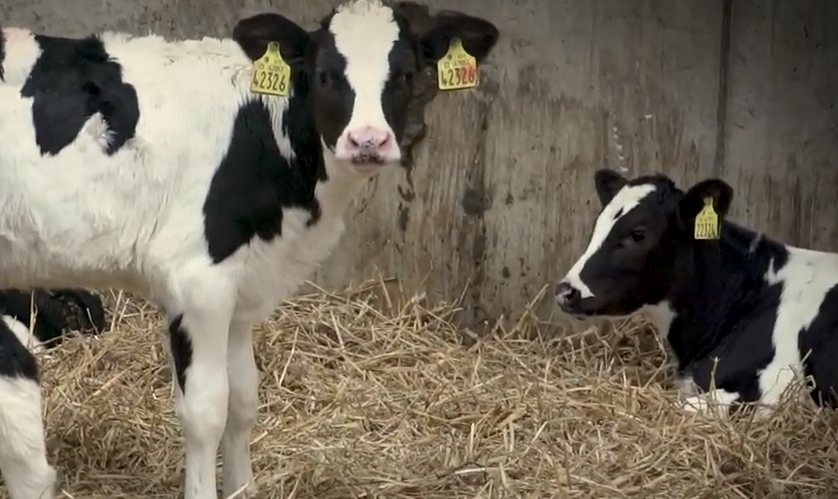 But the heifers get two straws if they repeat; the cows will only get one straw because we want the most fertile cows in the herd having a heifer calf. Generally, the heifers are fertile, but of the cows, you’d generally give them one straw across the board.

Is sexed semen is expensive and is it definitely worth the spend?

The way I look at it, back to the cow getting one straw, your most fertile cow will hold one straw; therefore, you’re getting a heifer calf – you’ve a 90% chance of a heifer calf coming out of that cow.

So yes, it’s definitely worth the spend.

What are your top tips for me? What is your advice for me?

Get the cow that suits your farm and get the cow you’re happy with. Every farm is different. My neighbours around here have a different cow type to us.

Throughout the filming of this episode, Kevin was keen to highlight that none of what happens on Pollard’s Farm would have been possible without the dedication of John Pollard.

John ran and transformed the farm to a modern set-up, with high standards from the mid-1990s – building upon his mother, Violet’s, milking enterprise that she started and grew from the 1970s, until his untimely death in a farm accident in 2015.

Kevin worked with John for six years before the accident.

“Everything I know about cows, I learned from John. To be honest, I am continuing his work really.

“The farm has changed in the last five years and John had this place at a really high standard, and although things have changed, we are continuing to pursue high standards.”

Marie-Pascale added: “Kevin stepped up to the challenge when John died and has taken the farm to new levels.

“John was very attached to a low carbon footprint and being environmentally friendly, and this remains very much part of the focus to this day.”

The day-to-day team consists of Kevin, Andy and Pearse. Andy and Pearse work four days/week and Kevin works seven days/week at the minute, but takes time off in the backend of the year. Kevin and Pearse rotate the milking, so “neither of us get fed-up”.

Progressive Genetics have made a donation to Embrace FARM (The Farm Accident Support Network) in John’s memory.

As the series draws to a close, George reflects on some of the key take home messages he obtained from each of his seven visits to dairy farms in different parts of the country.

In the video (below), the Wicklow-based farmer outlines some of these key learnings. Also, while we all agree that George is a great front man, he was not without his moments. Enjoy!!