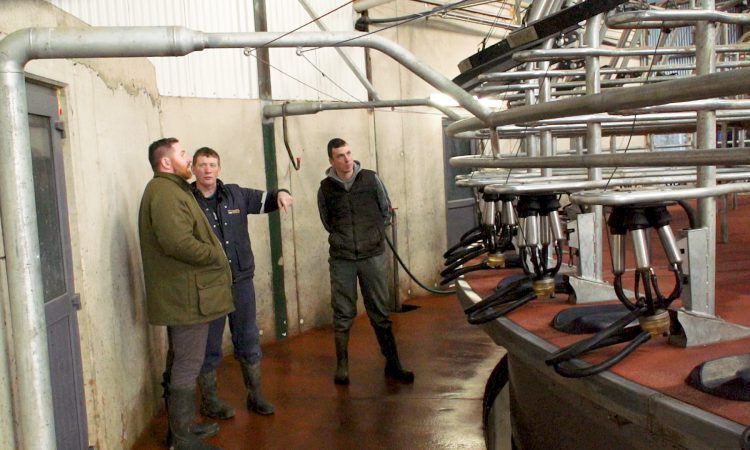 In the third episode of ‘George goes dairy farming’, Co. Wicklow dairy farmer George Beattie is on his travels again.

This time round, his destination is the farm of Kevin Murphy, just outside Gorey in Co. Wexford, where he milks a herd of crossbred cows under a spring-calving system.

Cow numbers have expanded on the Wexford-based holding and 280 cows will calve down in the coming weeks.

To cope with the growing numbers, a new parlour was installed recently – a new 44-unit Waikato rotary, which has halved the milking time compared to the previous 16-unit herringbone setup.

In terms of performance, last year 503kg of milk solids were produced per cow, with a six-week calving rate of 86%. The calving interval stood at 370 days and the herd has an average EBI of €159. 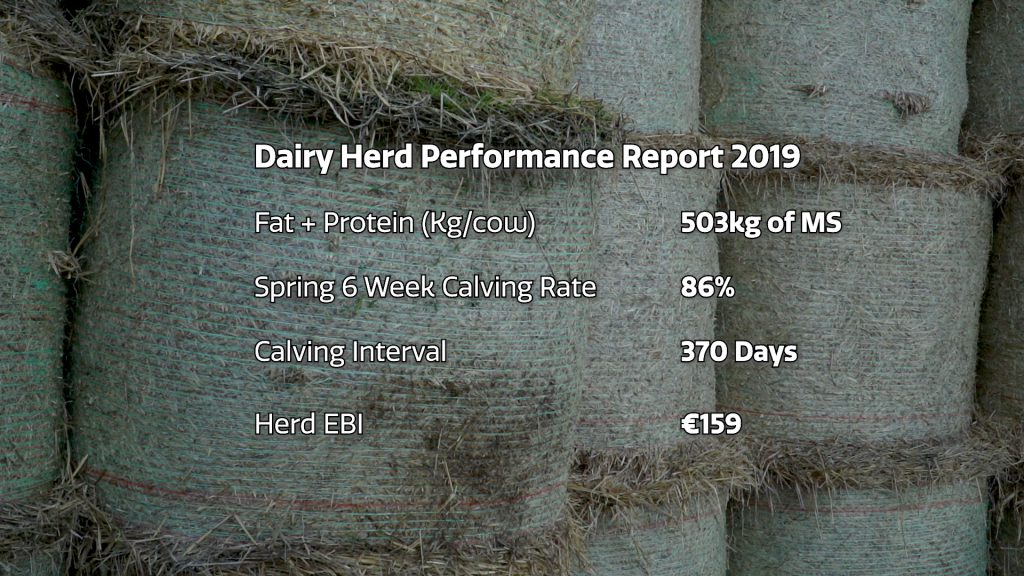 In the video (below), George and Kevin discuss the system on the farm, how this system changed from the pre-quota period, what genetics are now used in the herd; they also touched on how Kevin will manage the busy workload over the spring period.

What is your ideal type of cow and what genetics are now used on your farm?

Originally, it was a liquid milk herd, so we had plenty of big, milky Holstein Friesian cows, but at quota removal, I was looking for an easier managed, smaller cow, with more fat and protein.

The A + B – C payment system was coming in, so I went crossing with Jersey genetics 10 years ago. At this stage, all the cows in the herd have some sort of Jersey in them.

The compact calving means we can get out and utilise the grass when it’s growing. We calved 86% in the first six weeks last year, which means we were going out with a nice number of cows. We got a lot of days in milk off grass and that’s where the money and profit is.

I’m an ex-liquid milk farmer, so I like feeding cows and we probably fed 1t last year – which is too much. On the monitor farm programme, we have now set ourselves a target of approximately 800kg.

We try and stick to a programme throughout the year to reduce meal feeding, but we are not afraid to feed; if there is a shortfall, we will definitely feed.

How many labour units are on the farm?

There are two full-time labour units on the farm – myself and Brian and the rest of the family lend a hand when the calves are on the ground.

What tools do you use to fine-tune the calving season?

We will have 200 cows calving in February. We intend to have everything power-hosed, disinfected and pens set up.

We have a big loose area for the cows when they calve and the calves are brought to pens with five-to-six others. We have an automatic feeder for the heifer calves, so they will go onto that straightaway. 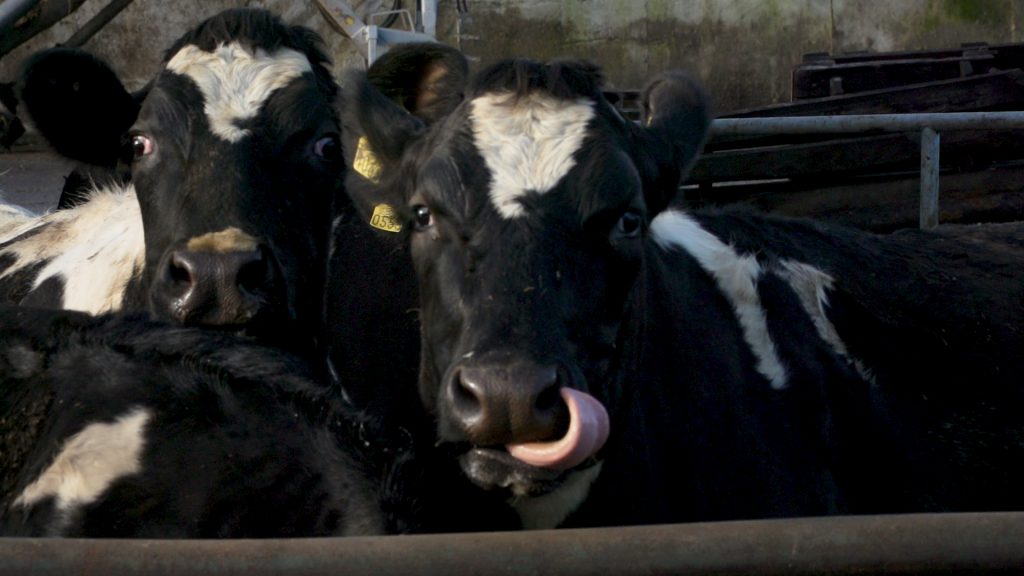 We are thinking about putting the calves on the feeder after two feeds of colostrum and then onto milk replacer – all to minimise their exposure to disease in the calf house.

How do you keep on top of registering 200 calves in four weeks?

I use HerdApp. I record them all in the ICBF (Irish Cattle Breeding Federation) handbook and – at breakfast after I have tagged seven or eight that morning – I record them with the app.

I actually washed my ICBF handbook last year in the washing machine and, only I had HerdApp up to date, I was in trouble.

During the breeding season, when you are selecting sires, do you look for the genomically-tested sires, or are you using sexed semen, or how do you breed your replacements?

Up to now, we haven’t used sex semen. We are toying with the idea of using it for a week at the very beginning of the season and using it on the heifers – the most fertile animals we have.

We have used a lot of genomically-tested bulls – based on the EBI active bull list, so we are not afraid of genomics: we think it works, so we will keep at that; there’s no reason to change. 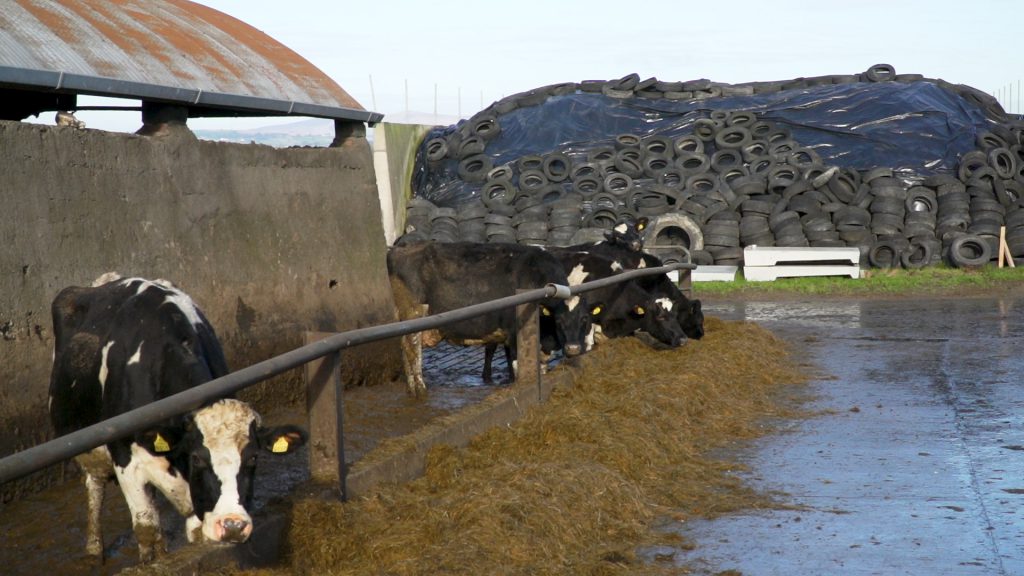 We would use a good proven bull if we used him before and we’re happy with him and his figures are up there with the best.

How do you record your serves during the breeding season?

I use the book to have a paper copy, but the most important part is HerdApp. I record all the serves with HerdApp and it’s up in the cloud and we can get them anytime we want.

I’d also use HerdApp when we are selecting cows for breeding. It’s so handy; you have it in your pocket, touch the screen and it’s up in front of you.

Where do you see yourself going in terms of beef bulls?

We are concentrating more on Herefords now – more so than Angus because of the colour of the calf. We will use a good-quality Hereford bull, but we are experimenting with Belgian Blue.

If we can get a Belgian Blue with a 283-day gestation or less, easy-enough calved and have a nice square shaped calf on the ground when we’re finished – that the beef man wants – we intend to go that way. 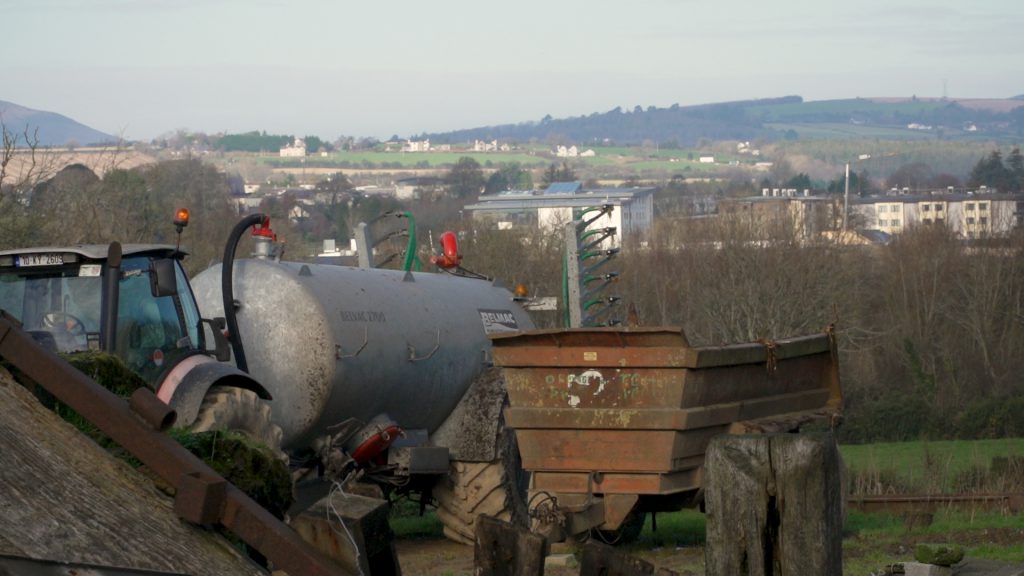 Is selective dry cow therapy (SDCT) something you will look at in the future?

For every dairy farmer, it is coming down the road. This year, when we have milk recording data, we fully intend to dabble in SDCT when we have more information.

I’ll give you two bits of advice George. The first one is keep your farming system simple, so anyone can follow your plan.

The second is, the most important three weeks of the year are the first three weeks of breeding. So you do everything in your power to get that right – preparing the cows for it, which probably starts at the dry period.

Then you put in a heavy workload in the first three weeks to make sure you pick up all heats and serve all the cows, and you will be rewarded with profit at the end of the day.