‘George goes dairy farming’: The right number of cows for the system in Co. Wexford

In this episode of ‘George goes dairy farming’, George Beattie caught up with Co. Wexford native at the end of January, Gordon Hemmingway, just before ‘silly season’ kicked off on his farm.

Gordon, who milks a herd of 180 cows under a spring-calving system, farms just outside Enniscorthy with his father, Austin, and farm worker, Paddy.

In terms of performance, last year 576kg of milk solids were produced per cow, with a six-week calving rate of 83% (as it stands for this spring, Gordon has calved 57% in three weeks). The calving interval stood at 370 days and the herd has an average EBI of €146.

However, 180 cows was not always the magic number.

Gordon attended Kildalton Agricultural College in the early 2000s, and when he returned home, a milk partnership was set-up with his father, who was milking 60 cows at that time.

Spring milkers at heart, the Hemmingways produced winter milk for a handful of years; however, after being wiped out with BSE, nowadays the 180-cow, spring-calving herd takes centre stage on the farm.

In the video (below), George and Gordon discuss the calving period, new technologies which make life easier on the farm and grassland management; the pair also touch on the breeding season and how the Wexford man goes about getting his herd back in calf.

Finally, Gordon outlines the direction in which he plans to take his farm, while also providing George with some timely advice as he embarks on his dairy farming journey.

You’re just about to kick off calving, talk me through your calving system. From when the calf drops, what do you do?

When the calves are born, the cows calve in a loose house and – as they’re born – the calves are brought down to pens – where they’re fed an adequate amount of colostrum. The cows are milked more or less straight away – with a solo milker.

The calves are then fed with this colostrum, so we know they’re fed. The calves don’t really suck the cow, so they’re fed the colostrum – 3L each, within a few hours of birth.

The calves are kept there and moved on to a feeder at one week-of-age.

You’re going to be under pressure with 180 cows to calve down, how do you manage your paperwork when registering calves?

Last spring I purchased HerdApp and it’s a very useful tool. We register the calves as they’re born on the app, which has worked very well.

I think it’s fabulous, even when scanning your cows. You’re scanning away and you can put all the information in on the app as you scan them, and you have a complete fertility run on your cows straight away. 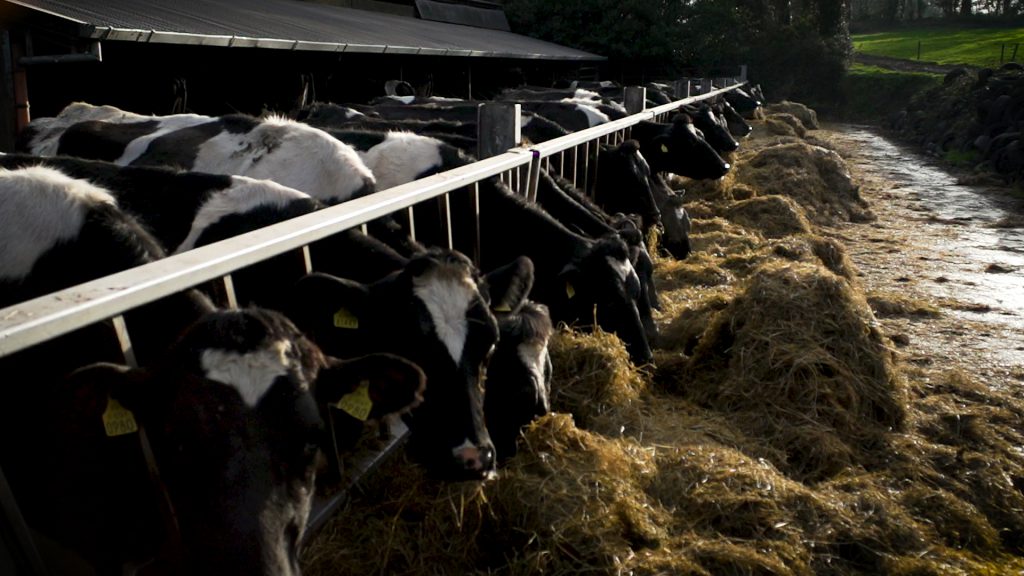 It beats going back to the book and going through them all; it’s just there on your phone.

You produced 576kg of milk solids in 2019. How much meal did you feed? Also, how do you manage the grass on the farm?

Our diet is grass driven. We did feed 1.2t of meal; we’re not on a feed-to-yield system, but the cows needed to be fed to that level and it paid off.

In terms of managing grass, we start in the spring on our rotation planner, and then we’re on an 18-to-21 day rotation for the grazing season; we’ll take off surpluses when there are surpluses.

This year on the grazing block, we’re stocked at 3.7LU/ha, so we took 300 bales off that block of surplus grass for feeding at the shoulders of the year. We did grow quite a bit of grass last year, but it was a good year for grass growth in fairness.

What is the performance of your herd? Also, how do you manage the breeding season and what do you focus on?

The cows are doing the business as they are and I like the type of cow I have – I have that bit of scope. We did 576kg of milk solids, but that’s 6,850L/cow. 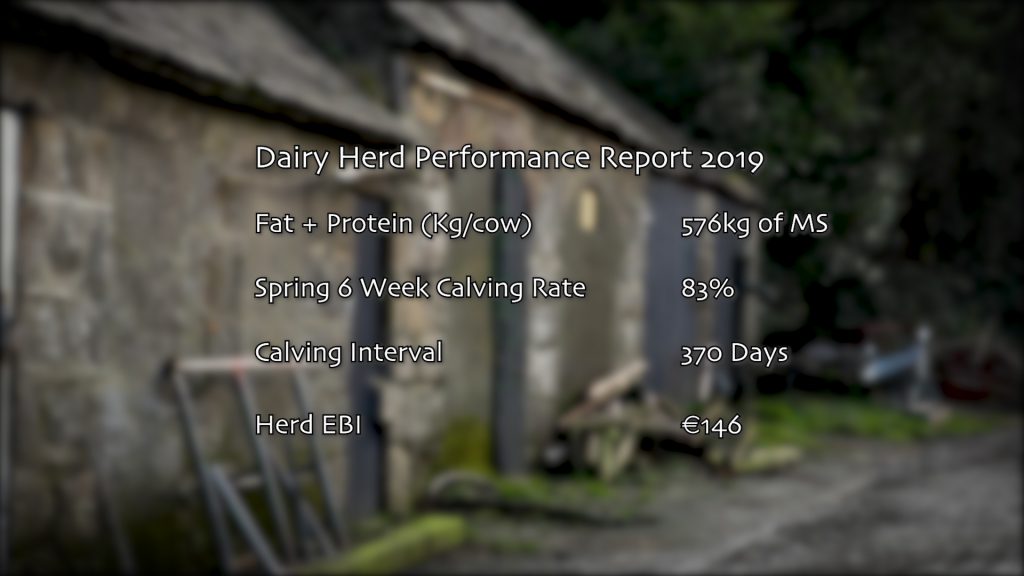 In terms of breeding, I had a very high score on the EBI on fertility a number of years ago, but not so much on the milk. So, I focused a little bit more on milk then.

We were breeding more milk into the herd rather than focusing solely on fertility, but saying that, we are still focusing on fertility – along with milk.

During the breeding season this year, we will be using MooCall Heat and we’ll be using teaser bulls; we have no stock bull. It will be all AI -12 weeks of AI for the cows and nine weeks for the heifers.

We use the technician from Progressive Genetics, Eugene Kehoe, and basically we just AI once-a-day; so every morning after milking, Eugene calls around nine o’clock and the cows are served.

How do you pick out the cows that will get the beef straws and where do you sell your calves?

We’ll select 10% of the cows for Belgian Blue straws because we don’t need a lot of Friesian. We’ll breed five weeks Friesian and Belgian Blue.

So, 10% are getting Belgian Blue straws and the remainder are getting Friesian; the heifers on the out farm are bred to Friesian also. 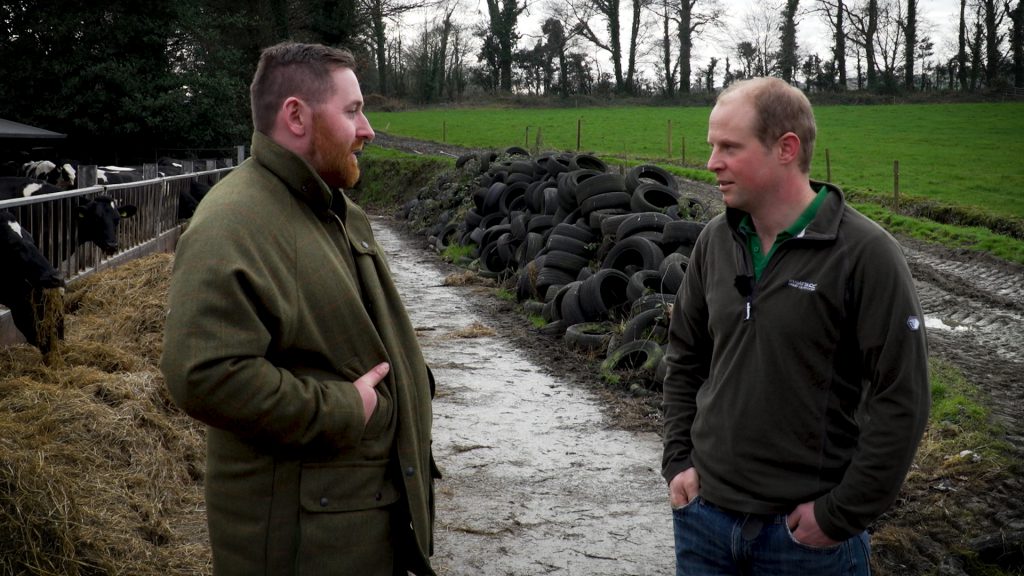 After time you get to know your cows; they might have issues or problems and I’ll select them. I also go on the lower-EBI cows. If they are a low-EBI cow and shes going in-calf every year, I’ll breed Friesian.

The beef animals – the Belgian Blue bull calves – are kept on the farm and fattened at two years-of-age. The heifers are generally sold to suckler farmers for replacement stock and the Friesian bulls generally just go to the mart.

I also used some Aubrac straws this year – just to add value to the beef calves. I think Aberdeen Angus calves tend to be a bit lower in value, so we said we’d try the Aubrac out and we’ll see how they go.

What advice do you have in terms of infrastructure and how I should go about that?

Ideally, you have to make the best of what you’ve got and that’s what we’ve always tried to do here.

We started off with 60 cubicles and, as numbers increased, we built very simple facilities – kennel-type facilities all around the shed and now we have 180 cubicles to cater for the cows on the farm. 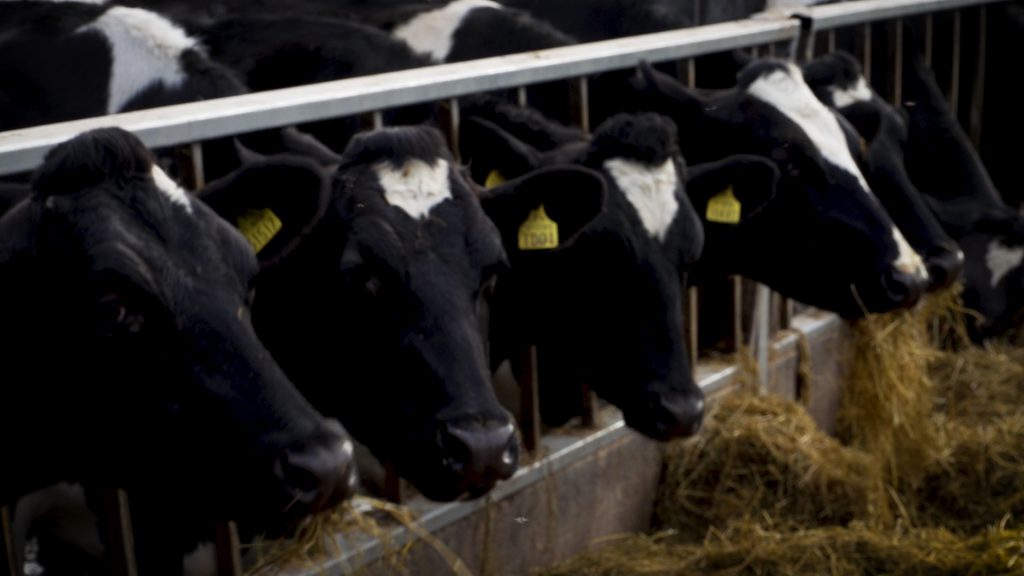 The same on the out farm, we have 50 cubicles up there for the heifers. So, we’ve good facilities for the stock now; but it was all done out of cashflow. We did a lot of the work ourselves – myself, my father and our farm worker.

In terms of scale, do you think you’ve reached the number you want to get to, or are you going to push on again?

No, I think we’re quite happy now with the number we’re at. It’s manageable and we can look after the animals to the levels we want to.

Expanding further obviously would incur more labour costs and, also, would I be able to manage the herd of cows as well as I can now? If you put in more cows, there’s only so many hours in the day, so there’s only so much any man can do.

So, at the minute we’re happy, we’ll do how we’re doing and we’ll see what happens.

In terms of advice for me then, going forward, what do you think I really need to focus on?

If you want to focus on anything, focus on joining a discussion group and try and get involved because when I came home, I didn’t know much to be honest.

I did a bit of relief milking for one of our neighbours in particular and he got me involved in the discussion group. It was really from there I got a real liking for dairying. It focused me and I knew what could be achieved and what I was aiming for.

I never came home from a meeting not thinking about something. I always loved going to look at other people’s farms and learning from them. 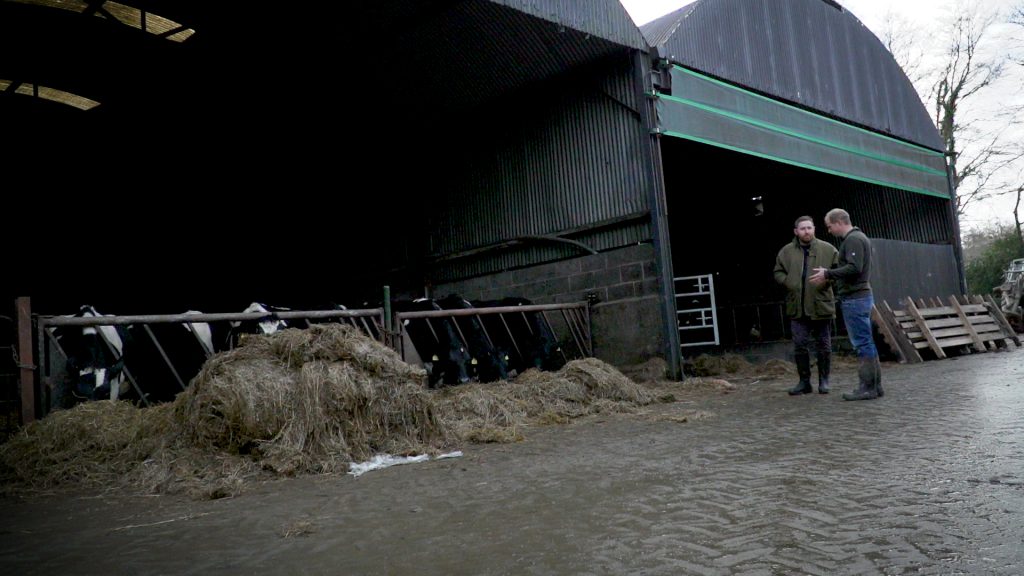 The other thing is to do the simple thing; don’t get over complicated – everything can be simple. At the end of the day, it’s getting the cow to eat the grass and put milk in the tank – all while making it as simple as you can.

You have a new herd now, so I suppose you have to decide on your breeding programme, but keep it EBI focused and work from there.