Cumulative sheep kill back by 15,486, a 9% increase in weekly spring lamb kill

The cumulative throughput of sheep at sheepmeat export plants has dropped by 1%, figures from the Department of Agriculture show, as total throughput currently stands at 2.2m head.

There has also been a 13% reduction in the total cast ewe and ram kill, with 40,919 fewer of these animals going to meat export plants in 2015 compared to the same period in 2014.

Figures from the Department of Agriculture also show that the total number of light lambs slaughtered has also fallen by 1,473 and stands at 2,556 to date in 2015. 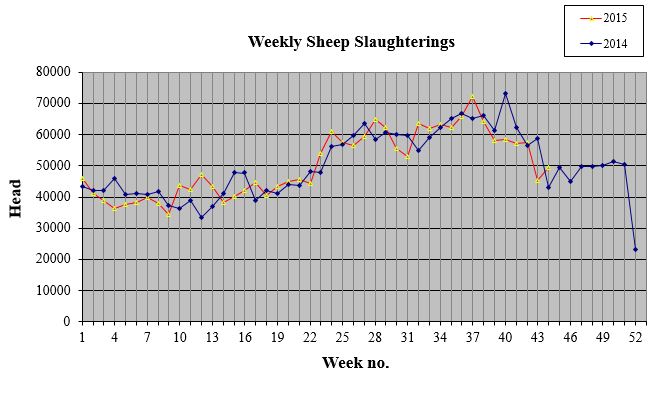 Last week’s national sheep kill currently sits at 49,516, figures from the Department of Agriculture show, this is an increase of 4,298 from the week ending November 1, 2015.

Figures from the Department of Agriculture also show that there were 103 hoggets slaughtered last week, which is a fall of 39 from the week ending October 25.

There has been an 4%  increase in cast ewe and ram slaughterings this is a week-to-week drop of 268 head.

The store lamb trade continues to remain buoyant despite the changeable weather over the last week, according to the Country’s mart managers.

Farmer demand is keeping a strong price floor under the store lamb market with these lots making €1.92-2.59/kg.

The trade for butcher and factory lambs also remains good on the back of reduced numbers coming forward to the marts, with these lots trading from €1.71-2.10/kg and €1.78-2.22/kg respectively.