The store lamb trade continues to remain buoyant despite the changeable weather over the last week, according to the Country’s mart managers.

Farmer demand is keeping a strong price floor under the store lamb market with these lots making €1.92-2.59/kg.

The trade for butcher and factory lambs also remains good on the back of reduced numbers coming forward to the marts, with these lots trading from €1.71-2.10/kg and €1.78-2.22/kg respectively.

According to Mart Managers, there is a noticeable demand for ewe lambs with the hammer falling on these lots from €95-125/head. 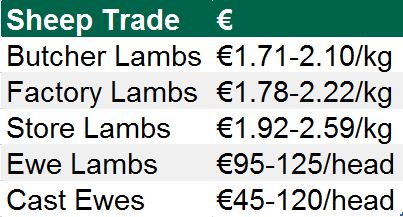 Despite the terrible weather over the weekend the sheep trade remained relatively strong in Baltinglass Mart and had little impact on the 2,000 sheep on offer according to the Mart Manager Joe Kinsella.

According to Kinsella, the store lambs continue to be a real good trade and these lots generally sold from €1.95-2.59/kg.

The Mart Manager added that the trade for butcher and factory lambs remains good and these lots sold from €1.87-1.98/kg and €2.05-2.25/kg respectively.

According to Kinsella, the ewe lambs continue to meet a strong trade with the best of the Cheviot types making €95-125 with the hammer falling on the tops of the Suffolk cross ewe lambs at €118/head.

Cast ewes in the Co. Wicklow venue had improved on previous weeks, he added, with these lots up by €2-3/head seling from €45-85/head.

The sheep trade was a little easier in Headford Mart on Saturday, according to the Mart Manager, Joe Wynne, with the numbers passing through the ring back a little on previous weeks.

Despite the slight reduction in numbers passing through the ring, the demand for store lambs remained buoyant and these lots traded from €2.12-2.24/kg.

Cast ewes also broke the trend and these lots sold €55-94/head with the latter price being paid for factory fit cast ewes, there was also a good trade for ewes lambs which sold from €45-50 over.

The numbers of sheep on offer in Maam Cross Mart were finally starting to wean, according to the Mart Manager Eoin Burke.

According to Burke, there wasn’t quite a full yard of sheep on offer but the trade remained good on Saturday and this was reflected in the prices achieved.

The trade remained good for crossbred store lambs and these lots sold from €48-100, the Scotch mountain lambs sold from €26-68/head while similar ewe lambs made €52-95/head.

Burke added that the Black Face Mountain ewes sold at similar prices to last week with the hammer falling on hogget ewes at €85-130 while old ewes made €43-102/head.

There was a very lively sheep trade in Kilkenny Mart on Monday, according to the Mart Manager Michael Lynch with lambs selling to a tops of €114 each, despite uncertainty in the factory lamb market.

According to Lynch, the numbers of sheep on offer were scarce with 600 lots passing through the ring and this helped the prices achieved for all lots.

There were slightly smaller numbers of sheep on offer in Roscommon Mart on Wednesday last, according to the Mart Manager, Maura Quigley.

According to Quigley, there was a steady trade for lambs with a large number of lots sold, butcher and factory lambs made €1.71-1.91/kg and €1.91-2.14/kg respectively.

The Mart Manager added that there was an improved trade for cast ewes with a full clearance of lots and these lots made €65-125/head.