The cattle trade has eased slightly on previous weeks, according to the Country’s mart managers with plainer lots more difficult to sell.

Despite the fall in prices for heavier cattle the trade for weanlings remains relatively good with bull and heifer weanlings making from €2.53-3.22/kg and €2.55-3.65/kg respectively as weanling export numbers continue to fall. 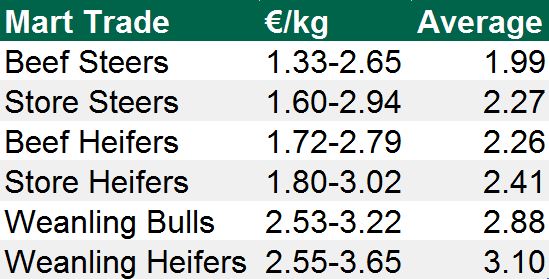 There was a large sale of cattle in Balla Mart on Saturday with 1,350 lots passing through the ring, according to the Mart Manager Michael Murphy.

According to Murphy, the trade for store cattle remained strong particularly for the store steers weighing greater than 400kg, he added that there was also a large entry of in-calf heifers on offer.

There was a large number of heavier steers on offer and but despite this these lots remained in good demand and generally sold from €1.33-2.65/kg, despite a fall in the national beef kill.

According to Murphy, there were 240 cows on offer on Saturday, the best in-calf heifer which was due to calve in February made €2,090 while cull cows generally made €1.58-2.30/kg.

There was increased farmer activity for all lots on offer in Mountbellew Mart on Friday, according to the Mart Manager, Marianne Higgins.

The Mart Manager added that weanlings were a firmer trade on the previous week with increased prices achieved for quality lots, weanling bulls made €2.53-2.91/kg while their counterpart heifers sold for €2.55-3.65/kg.

The cattle trade was a little easier in Kilkenny Mart for the 1,080 cattle on Thursday, according to the Mart Manager, Michael Lynch, with a quiter trade for plainer lots.

According to Lynch, the prices achieved for the better quality cattle had also reduced and these animals were not commanding the same returns as a month ago.

There was a good cattle trade in Macroom Mart on Saturday, according to the Mart Manager John O’Mahony and this was reflected in the prices achieved.

76% of the UK's beef imports are from Ireland