Charolais bulls topped at €7,100 – but mart guidelines cause ‘frustration’

Charolais bulls topped at €7,100 – but mart guidelines cause ‘frustration’

The first sale of 2021 hosted by the Irish Charolais Cattle Society was held on Saturday (February 26) in Tullamore Mart, with over 60 bulls out of the 93 catalogued turning up for auction.

The sale began with a strong start, as the third bull into the ring proved to be the highest priced bull on the day.

However, as the sale progressed to the half-way point it was challenging for a number of exhibitors to get their bulls moving. Towards the last quarter there was an uplift in prices once the younger bulls began hitting the ring.

The clearance rate recorded was just 64% on the day – with the sale average coming to a respectable €3,769. This average is up by €515/head on last year’s sale.

With the country still being under Level 5 Covid-19 restrictions, the Department of Agriculture, Food and the Marine (DAFM) circulated new guidelines to marts last week for the operation of pedigree bull sales this spring.

The new measures saw exhibitors having to vacate the mart at 9a.m. on Saturday, with customers permitted to view the bulls by appointment.

Customers had to abide by social distancing guidelines and then bid solely through the online platform.

These guidelines were also in place for the exhibitors selling bulls on the day – as sellers were only allowed back into the mart prior to their bull heading to the sales ring.

According to the Irish Charolais Cattle Society breed secretary, Nevan McKiernan, the guidelines proved to cause “frustration” for exhibitors and customers. He explained:

“In my opinion the restrictions imposed by the DAFM today did not help the sale. Buyers were not able to view the bulls and see the bulls walking out of the pen.

Exhibitors being taken away from the bulls for a three-hour period, whilst the viewing was underway, is just not practical and it’s not workable. From our end it was an extremely difficult sale to work with.

“I would call on the DAFM to review the running of pedigree sales for this spring.

“These sales are essential for the breeding season and better guidelines need to be put in place for customers and exhibitors. Otherwise, we are going to have problems going forward,” Nevan concluded. 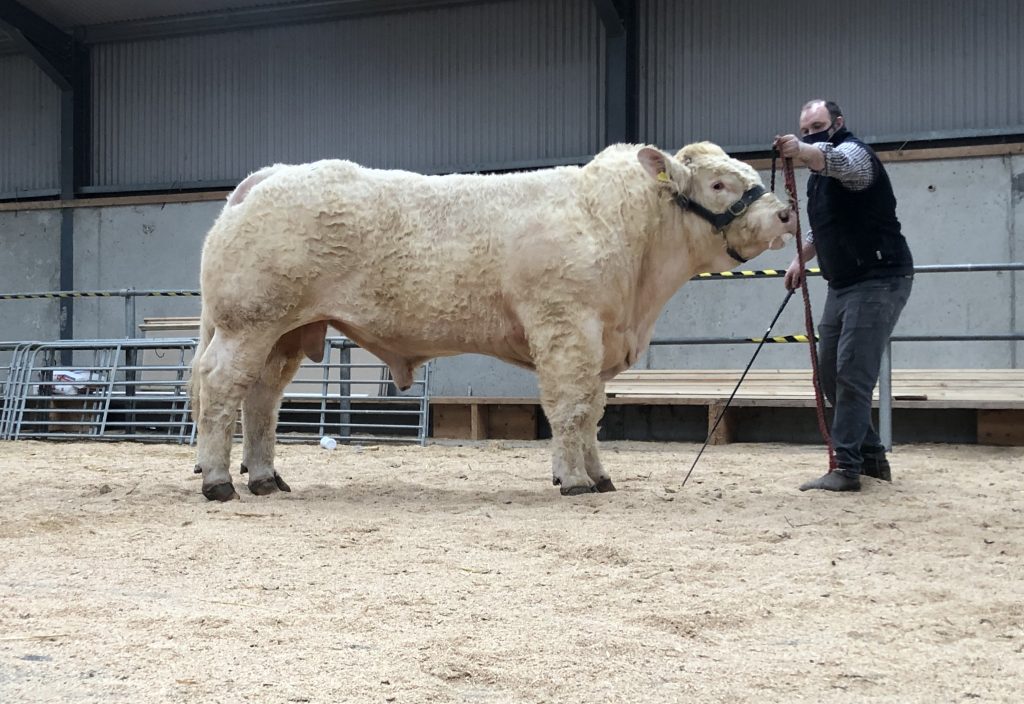 Topping the sale at €7,100 was the Donegal-bred Roughan Philip (pictured above) exhibited by Patrick McClean. This June 2019-born bull is sired by Roughan Justbeau and out of a homebred dam sired by Roughan Dix De Coe.

Boasting a calving ease of +4.4% on matings with beef cows, Philip also has a terminal index value of €135. Philip was exported to a farm in Co. Down after the sale. 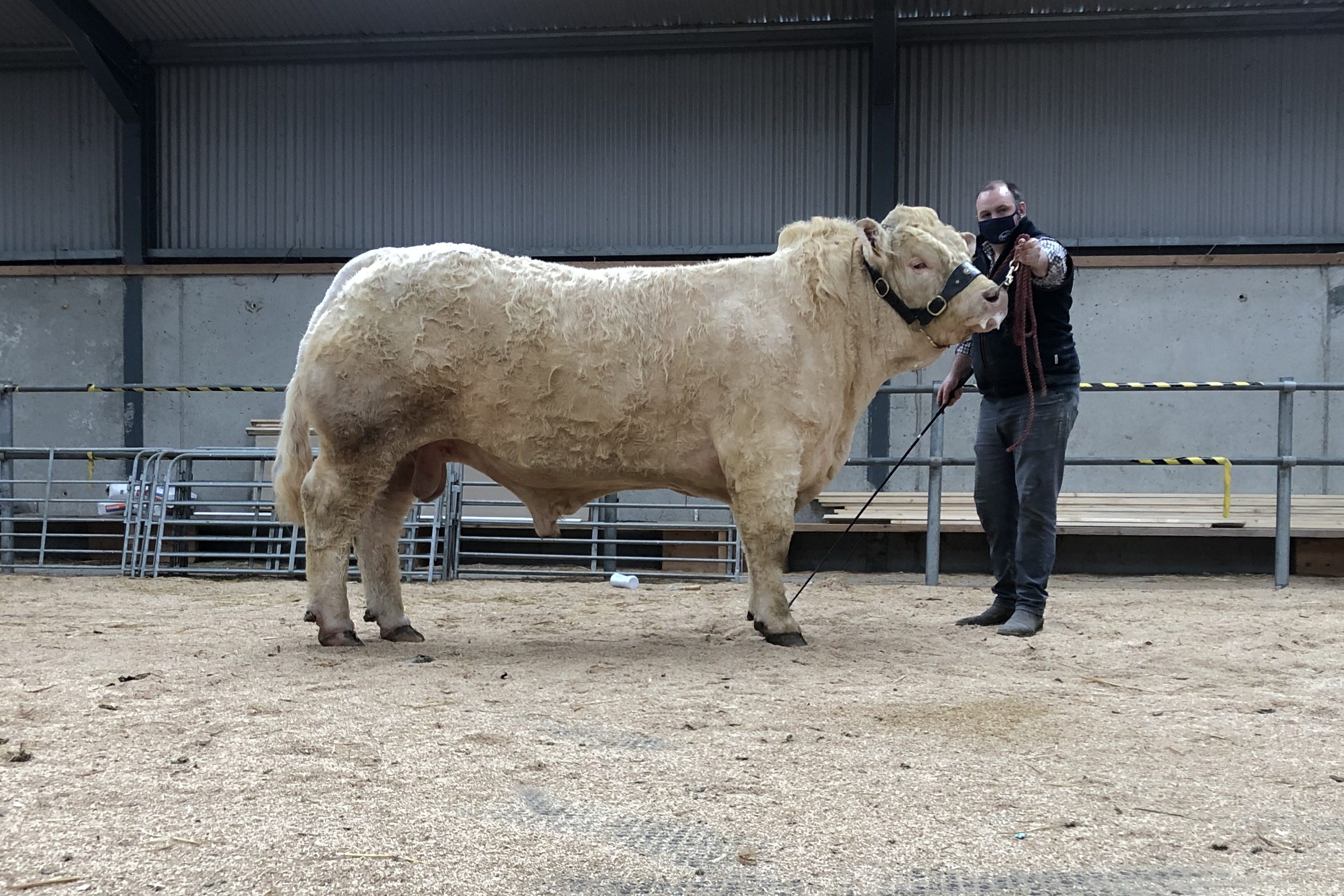 The second of the Roughan herd’s offerings, Roughan Percy, sold for €6,700. The sire this time was Roughan Gibraltar, with Roughan Echo 2 and Roughan Ultimatum being found in his maternal back pedigree.

This bull carried one copy of the F94L myostatin gene and was ranked having a calving index of +3.5%. Percy was secured by a suckler farmer from Co. Galway.

Niall McNally from Carrickmacross in Co. Monaghan had a successful day with his two offerings as he took home a total sum of €13,600. 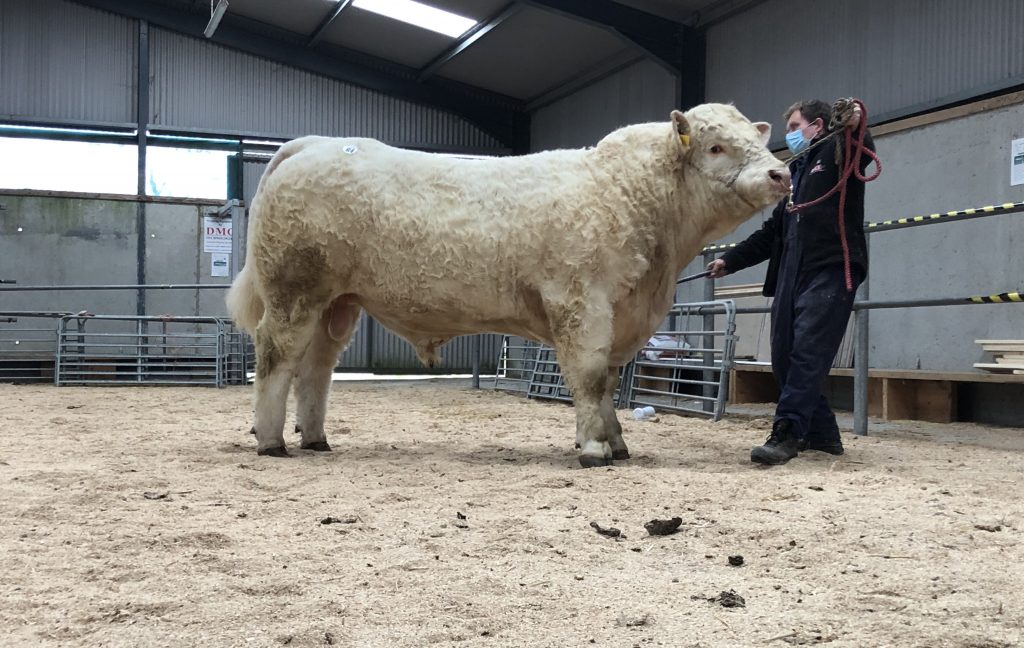 The first of Niall’s bulls into the ring and selling for €6,900 was Derryolam Pacha. He is sired by the popular Goldstar Echo and he was out of a homebred dam sired by Pacha. This November 2019-born bull carried a terminal index value of €125, alongside a calving ease figure of +5.6% on matings with beef cows. 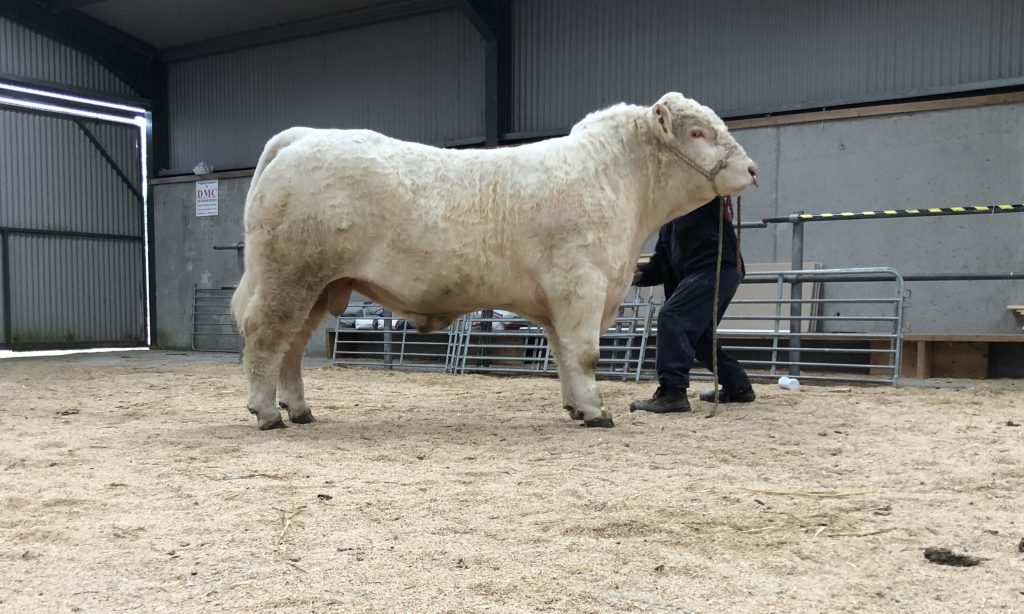 Derryolam Pirate was next into the ring and sold for €6,700 to a suckler farmer from Co. Galway. Fiston was the sire this time, with Pirate and Doonally New making up this bull’s maternal back pedigree. This male has an impressive set of indices, as he is awarded €144 on the terminal index and €114 on the replacement index, respectively.

Monaghan breeders continued command the trade, as Fieldview Pete bred by David Erskine sold for €6,600. The bull is, again, sired by Fiston and out of a homebred dam sired by Anside Foreman. 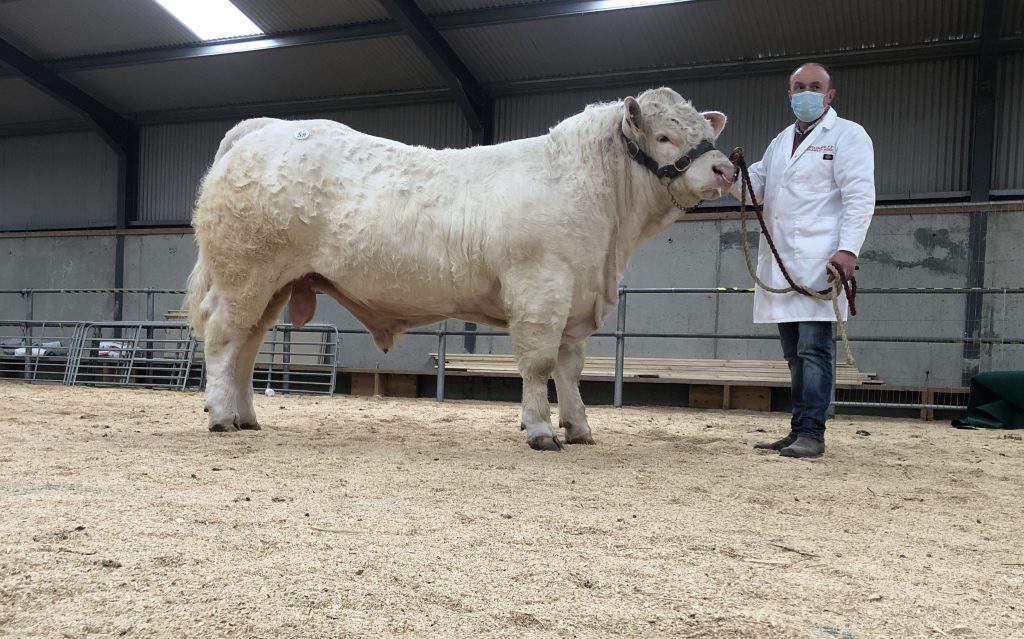 Pete was born in October 2019 and ranked with a terminal index value of €152. He carries one copy of the Q204X myostatin gene and will now graze news pastures in Co. Clare. 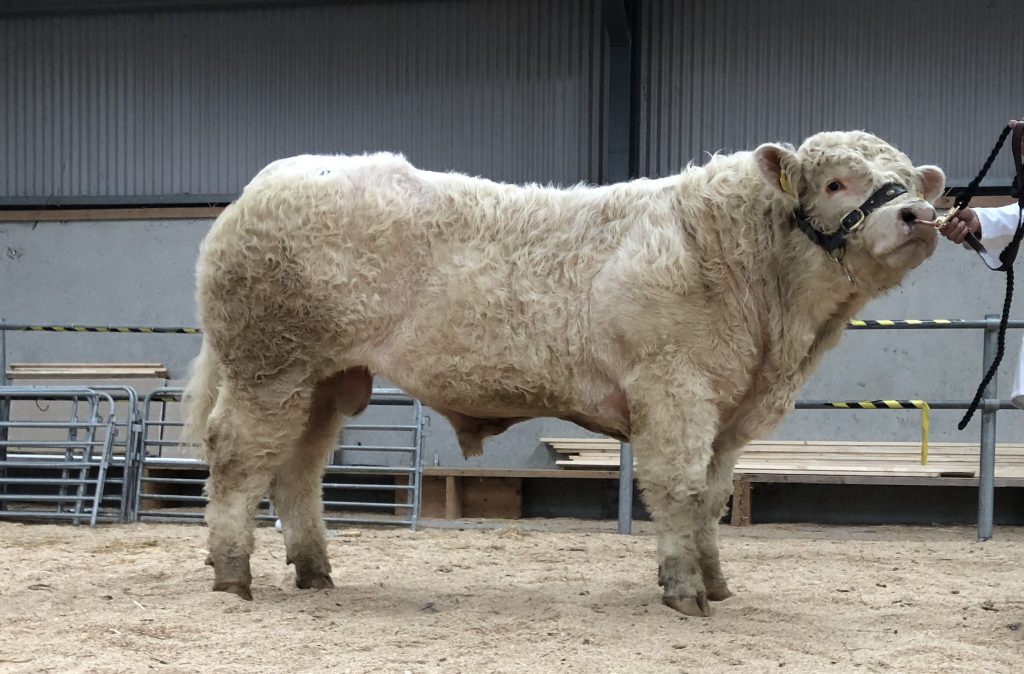 A Balmyle Vagabond son, Rathfeston Pablo (et), sold for the next highest price of €6,400. Shown by Wayne Mulligan from Geashill in Co. Offaly, this stylish 16-month-old bull was out of an Erkmann-sired dam. He carries two copies of the Q204X myostatin gene and sold to a farmer from Wales.

Next up selling for €6,000 was Monagh Paddy, exhibited by Nigel Peavoy from Co. Laois. The sire this time was Goldstar Ludwig, with Prime Roberto and Doonally New being found in his maternal back pedigree. 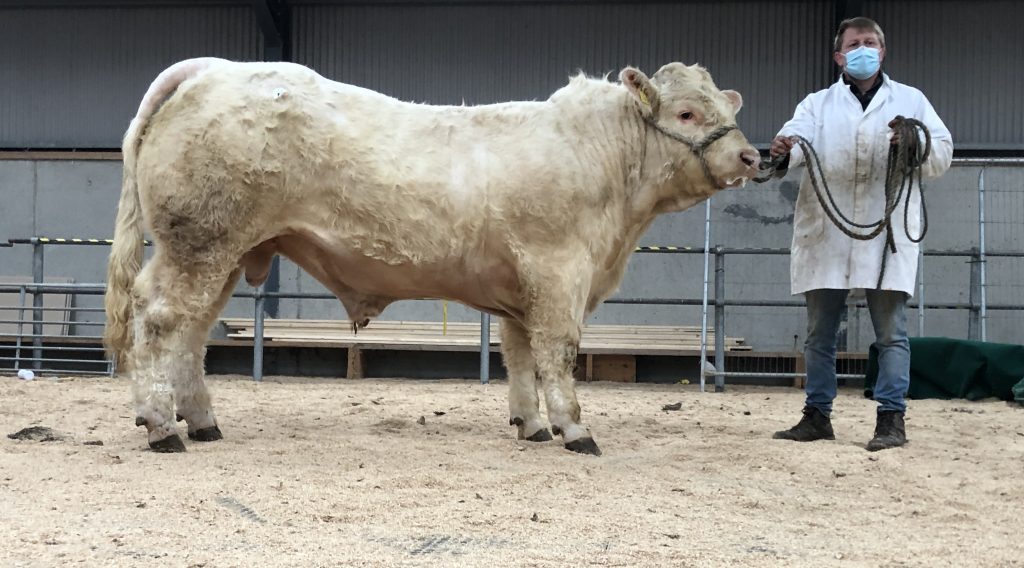 This October 2019-born bull carries €144 on the terminal index and one copy of the Q204X myostatin. Paddy was purchased by a farmer from Co. Cavan.