Milk reduction scheme appears to be working as collections fall

The voluntary milk reduction scheme, introduced by the European Commission, appears to be working as the volume of milk produced across Europe has declined.

The latest statistics from the EU Milk Market Observatory show that the volume of milk collected across the EU decreased by 3.6% in October 2016 compared to October 2015.

This coincides with the first month of the voluntary three-month programme, which pays farmers 14c for every litre of milk reduced on the corresponding time in 2015.

The first tranche of the scheme will run from October to December of this year, and according to the European Commission 52,000 dairy farmers across Europe applied to take part in tranche one of the milk reduction supply measure.

And on the back of this measure, the volume of milk produced across the EU is expected to fall by 2.9% in the final three months of 2016.

However, despite the fall in October collections, it also shows that the cumulative volume of milk collected (January-October) is 1.2% above the same period in 2015. 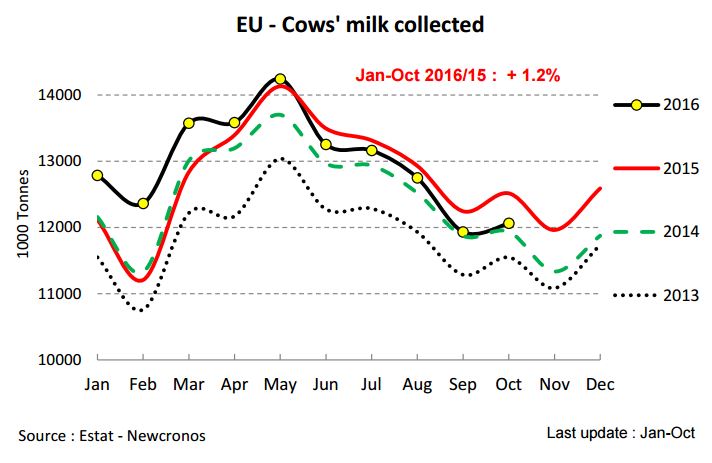 IFA National Dairy Chairman Sean O’Leary said the outlook for dairy and milk prices in 2017 is positive, with global milk supplies unlikely to increase in response to improved milk prices over the medium term.

“Many farmers have been financially crippled by up to three years of low milk prices in all regions bar the US, and cow culls in the EU have increased by over 7.5% this year to date,” he said.

Global demand has also remained robust, with strong demand for butter and cheese in particular in developed countries.

“In emerging countries, ongoing exports of powdered products in particular have performed strongly, benefiting from the earlier lower dairy prices, but more recently from increases in oil prices.”

O’Leary also said it is crucial that co-ops continue to pass back as much of the benefits they are gaining from improved dairy prices.

'Cashflow overhang on dairy farms must not be underestimated'

No let up in US milk supplies as November collections jump 2.6%