Following the outbreak of a second wave of protests at beef processing facilities around the country, Liffey Meats in Ballyjamesduff in Co. Cavan is the latest site to be affected.

According to a post on the ‘Irish Farming Discussion Group’ page on Facebook, posted this morning, Tuesday, August 27, a small group of farmers, in high-visibility vests, have gathered on the road outside the facility, and placed a silage bale at the entrance.

The Facebook post said that the farmers concerned were “not happy”, and that they wanted to save “our grass-fed beef” and “small farmers”.

The post doesn’t indicate if any farmer organisation is involved in this action. 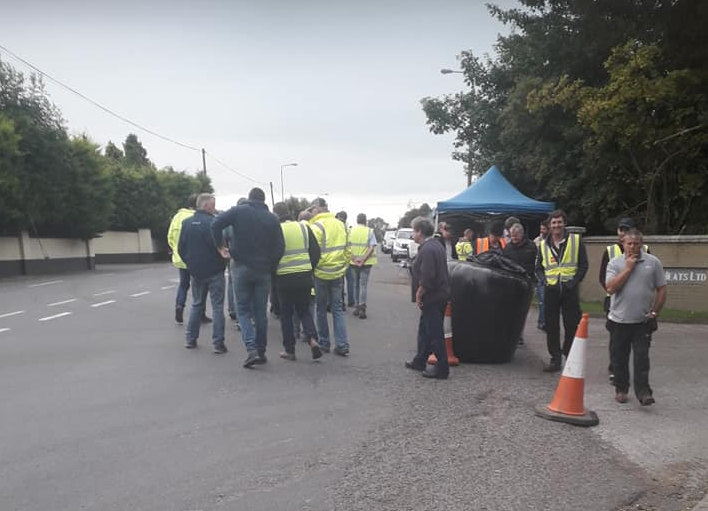 This follows on from a protest yesterday, Monday, August 26, in Co. Waterford, in which a processing facility was “brought to a standstill”.

AgriLand understands that protesters struck an ABP facility in Ferrybank, on the outskirts of Waterford city.

Sources told AgriLand that farmers stopped lorries from entering and exiting the facility.

Again, these farmers are not believed to have been acting under the banner of any particular group.

It is understood that the plant continued to operate; however, Gardaí are believed to have been at the scene.

Also yesterday, Meat Industry Ireland (MII) claimed that any plant disruptions could turn into an “own goal” for the sector.

He was referring to a visit to Ireland of a team of Chinese officials to inspect Irish meat plants, with a view to approving more plants for exporting beef to the Asian country.

“Peaceful protest is a right of all, but any disruption of normal processing activity which impacts businesses, staff and farmer suppliers is unacceptable and will only do further damage in an already difficult trading environment,” MII argued in a statement.