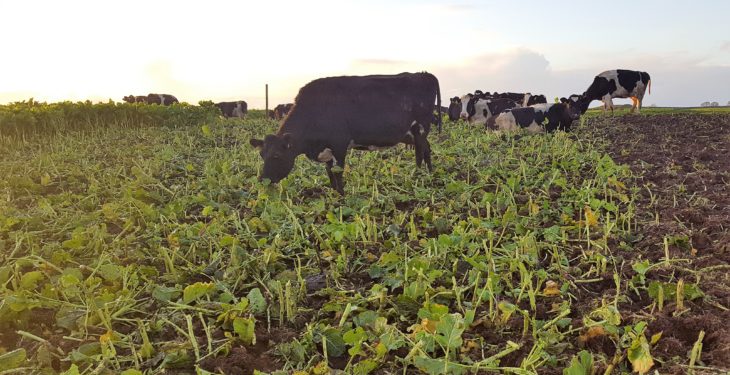 In an industry where the inter-generational transfer of land remains the primary method of bringing new people into farming, Kevin Moran is a shining example of what can be achieved through hard work, dedication and the courage of your convictions.

The youngest of 11 children, Moran grew up on a 40-cow dairy farm in Claremorris, Co. Mayo. Now approaching 24 years-of-age, he’s preparing to milk 320 cows next year. What makes Moran’s story even more impressive is the fact that it took just five years to grow his business to this scale.

Furthermore, the young farmer didn’t own a single acre starting off. It wasn’t until his uncle Joe agreed to lease him a 36ha block – on a 10-year lease – that the idea of one day running his own dairy business began to turn into a reality.

Last week, before handing over his FBD / Macra na Feirme Young Farmer of the Year crown, Moran hosted a farm walk on his holding in Killamanagh, Caherlistrane, Co. Galway. 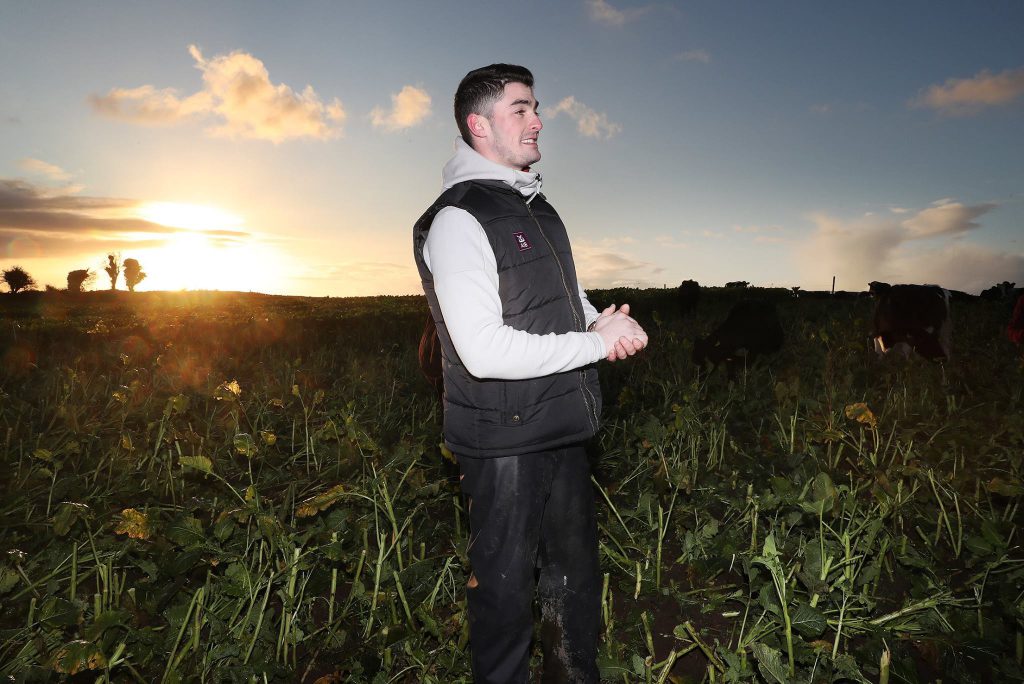 In 2012, after securing access to land, Moran was refused finance on nine occasions. After going back to the drawing board and addressing the bank’s concerns, he was granted the necessary funds to make his aspirations of becoming a dairy farmer a reality on the tenth attempt.

Moran took up the telling of the story, adding: “I agreed a 10-year lease on the 36ha with Joe and, all of a sudden, I needed to buy cows.

“I went back to the drawing board and – between that November and February – I was refused finance nine times. I had to look at my business plan and get to know it inside out; I needed to understand why they were saying no.

“I also didn’t have any collateral, which was and still is a big issue for any young farmer who is willing to have a go in Ireland.”

This lack of collateral was one of the main reasons why Moran struggled to access finance. However, this was resolved when his uncle Joe agreed to act as guarantor for the venture.

“It was such a big thing for him to do; if I didn’t do what I said I was going to do the bank could easy call in the security and he could lose his land.”

Once finance was granted, Moran began to put the wheels of milking cows into motion.

Since then, Moran hasn’t looked back and has grown the Killamanagh-based holding incrementally.

In 2014, Moran’s herd increased to 100 cows. This was achieved as another uncle – Michael – agreed to contract rear the herd’s heifers on his 40ha farm.

While completing a Nuffield scholarship in 2015, Moran maintained the herd size of 100 cows. However, he began to enter negotiations with Michael about other possible uses for the farm.

“When I came home from the Nuffield scholarship, I started talking to Michael. To this day, he’s a massive help to me and he’s a mentor in many ways. I think he’s 73 going on 27.

I spoke to Michael about a partnership and different types of arrangements. Ultimately, it’s a fantastic farm that was growing lots of grass.

“But that grass was being turned into kilograms of liveweight. With the milking parlour located just 100 yards away, it could have been turning grass into kilograms of milk solids. At that stage, because of the tax-free incentives, it made a lot more sense to lease the farm,” he explained. 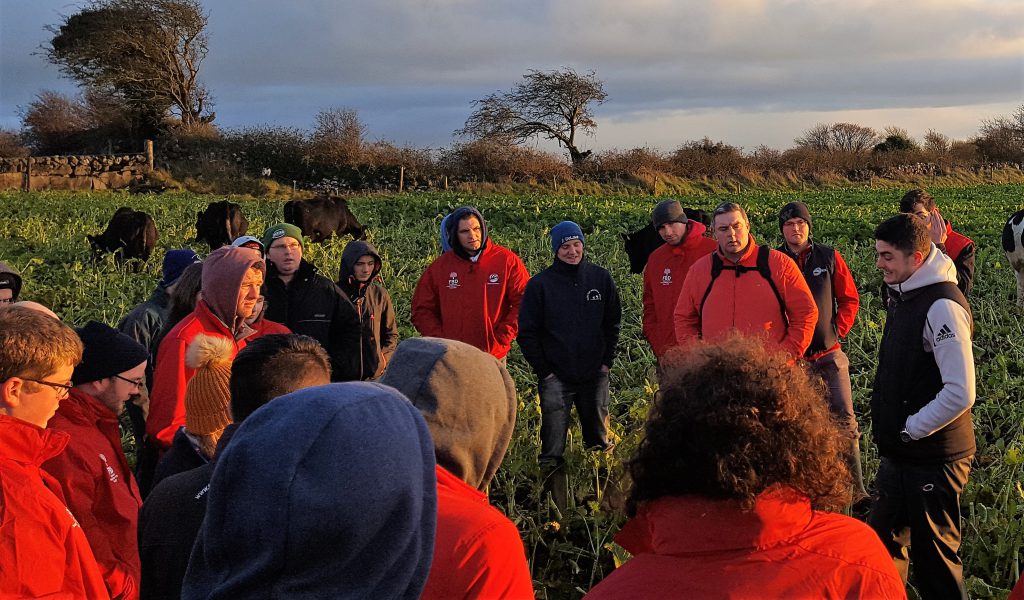 Given the addition of this land, the Galway-based dairy farmer was able to increase cow numbers to 220 in 2016.

I milked 220 cows and I learned so much; I got an awful lot wrong. However, the one thing I would say is that mistakes don’t kill people if you are willing to learn from them.

“I was trying to do it all by myself and there wasn’t enough labour on the farm. To resolve this, Evan and Steven joined me this October and there will be three of us here next year.”

With the employment of Evan and Steven – along with a helping hand from Michael, Joe and his father John – Moran milked 240 cows this year.

As it stands, Moran is preparing to calve 330 (cows and heifers) next spring; he’s aiming to milk 320 cows throughout 2017 at a stocking rate of a little over 3 cows per hectare.

The majority of Moran’s herd of 240 cows are still in milk; 13 thin cows and any first-lactation animals were dried of on November 5.

These cows will be moved down to Michael’s yard where they will be provided with silage (77% DMD) ad-lib and 2kg of concentrates per day.

All of the cows in the milking herd were moved to once-a-day milking on December 1. These cows will be milked until January 20; the cows in the herd will be given a six-week dry period and first-lactation animals were dried-off 10 weeks prior to calving. 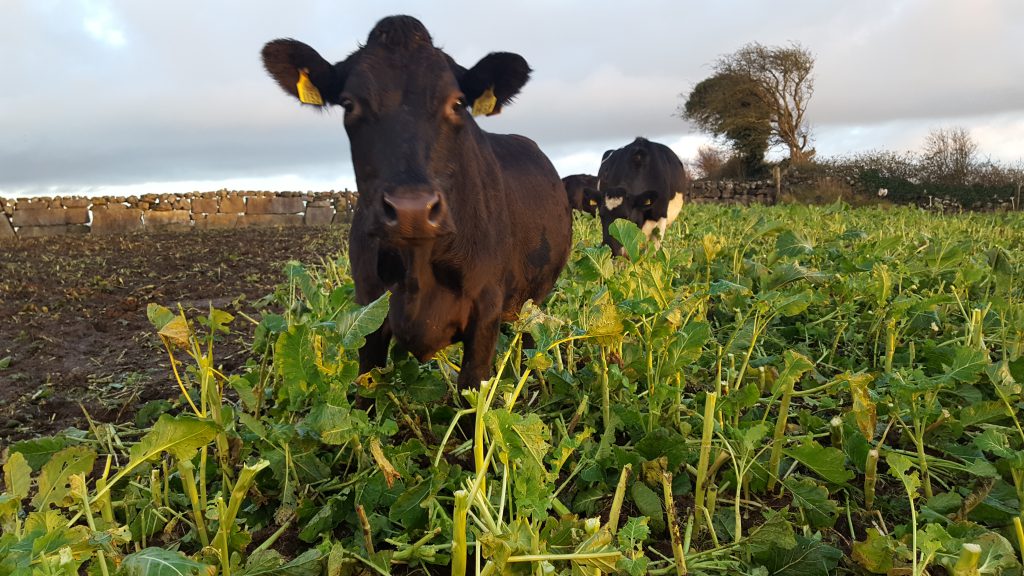 Kale will form the main part of the cows’ diet for the next three weeks; the cows are currently being offered 6-7kg/day (dry matter) of kale, 3kg of concentrate and have ad-lib access to grass silage.

This year, Moran is aiming to feed 500kg of concentrate and his cows have already produced 450kg of milk solids; it’s very much a grass-based system and 15t/ha was grown on the milking platform in 2017.

On the importance of extending the grazing season out as long as possible, Moran said: “People think you need a cubicle per cow and you have to invest heavily in concrete; really the things that make you money are cows and grass.

Because my hands are tied here with no collateral, I’ve had to put the borrowings into cows and grass – the areas of highest return.

“If you get 365 days at grass, you don’t need any sheds. But if you get 300, it reduces your requirement for sheds greatly.

“I’m farming on a good, dry farm and at the end of the day our competitive advantage is grass; most of the money has gone into that. Since 2013, I’ve put €181,000 into grass, water and roadways. I’ve put very little into sheds.”

Moran also touched on the importance of labour and how the team manages to milk 20 rows of cows morning and evening.

“People can get very tied down on the fact that we’re doing 20 rows of cows twice a day or that we’ve only 100 cubicles on the platform.

“To get around milking the 20 rows of cows, we’ve a rota system in place. If you milk in the morning, you don’t milk in the evening.

“There’s three of us here and we work every third weekend; if you’re working the weekend, you get the preceding Thursday and Friday off. It goes without saying that the two guys here with me are excellent.

“At the end of the day, the running of a farm comes down to three things – facilities, simplicity and organisation. If you have excellent facilities, it will save a lot. But if you’re organised and your system is simple, everything is much more streamlined.

Cows convert green forages into kilograms of milk solids and our job is to just facilitate that. If we are tied up driving a tractor, something is being neglected here. The contractors take an enormous amount of work out of it.

Moran continued: “We use contractors to do pretty much everything in terms of machinery work and we’ve no real machinery here on the farm.

“Our contractors are in our Whatsapp feed as well. So during the summer, after completing a farm cover, the guys simply write up in the group what paddocks have gone too strong.

“A few days later, once the weather allows, you’d see the contractors coming over the road to stack the bales in the yard.”

Next spring, Moran has also secured the services of a night calver. This will free up Moran, Steven and Evan to focus solely on the jobs that require completion during the day. 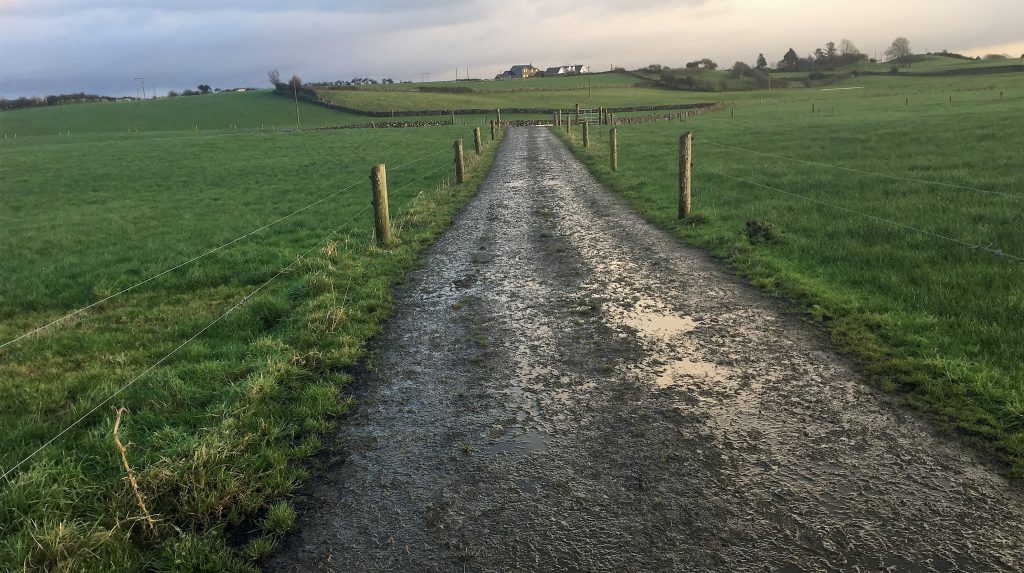 Along with Evan and Steven, Moran also highlighted the important role Michael, Joe and his father John play in the whole operation.

“I won’t say what date is on their birth certs, but they’re probably the most energetic people around the yard.

“When it comes to 5:00pm, we might be in a rush to head home, but they won’t leave until everything is done correctly. They are invaluable to the entire operation.”

On the relationship with his two uncles, Moran said: “The most important thing is that they feel they are involved and you bring them on the journey with you.

Every Monday morning, we sit down and make a plan for the week; everybody knows what’s going on.

“Farmers are programmed to build something up over 50 years and they can’t just switch off over night; it’s very important that they stay involved.”

“89% of the herd calved in six weeks this year and we’re utilising almost 12t of grass. They’re the two most fundamental KPIs that any efficient dairy business is built on.

“Because those two things are right, I’d have no hesitation in expanding. If they weren’t right, I’d say we need to fix those first.

In five years time, ideally, I’d love to be at 800-900 cows. However, the biggest barrier is mindset. In essence, we have the people here and all we need now is land and money.

Continuing, he said: “If you put in the preparation beforehand and you know your costs and your business, you can expand for the right reasons.”

As it stands, Moran is examining his options to allow Evan to buy into the business. Regarding this, the area that requires the most work is the exit strategy. This is important as it ensures that the business remains protected if either party decides to move on.