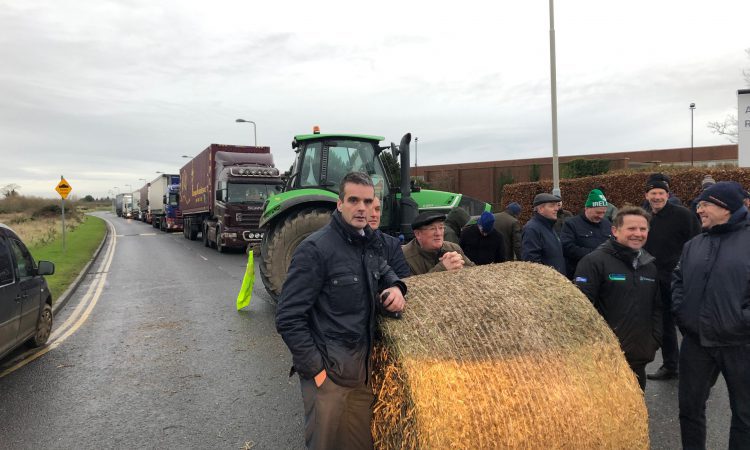 In a statement, the group said: “Lidl has come out publicly to support the use of beef from animals more than 30 months, which is resounding support of grass-fed beef and support for Irish beef producers and which refutes one of the main unfair trading practices against primary producers.

“Aldi has engaged with the Beef Plan Movement in a very open and constructive manner with a view to reviewing its purchasing criteria – for example, Grass-fed, 30 months upper-age limit along with other Quality Payment Scheme requirements.”

The Beef Plan Movement held its own protests at beef processing plants across the country over the summer, with the action heralding major concessions, including the establishment of a Beef Market Taskforce.

A spokesman for the group added: “It is ironic and short-sighted that these two retailers have been targeted in this manner, when there are other significant retail organisations, some of which are homegrown, which have failed to engage with Irish beef farmers.

The Beef Plan Movement is of the opinion that this failure of engagement was a resounding endorsement of the QPS retail specification and unfair trading practices against Irish beef producers, who are forced to bring their animals to sale in a controlled manner.

“The Beef Plan Movement now invites retailers to engage in open dialogue with the farm organisations of Ireland and with the Beef Market Task Force to ensure that our valued consumers are not used as pawns at this time of year, when peace and goodwill should be shown to all,” the spokesman added.

“With a looming global shortage of meat protein, it would now be prudent for these large retail buyers to engage with farming stakeholders to ensure continuity of supply.

It is now abundantly clear that Meat Industry Ireland members will have to raise the price of beef because testimony from BPM members is that farmers have significantly reduced the animal numbers being fed for slaughter for the upcoming winter period due to its economic unviability.

“It is apparent from data on the AIMS database, the numbers of animals for finishing are there but we also know from BPM members that farmers are not putting flesh on cattle.

“From a retail perspective, when the animals are not being fleshed for slaughter, the supply chain falls down.

“As is in everything in life, actions have consequences, the actions of the meat processors over the past 12-24 months has led to consequences, where farmers have made decisions not to put themselves in debt by feeding animals for slaughter that could ultimately yield a poor return.

“These consequences will have to be dealt with by MII and its members as it will lessen the product availability to retail buyers. Continuity of supply has been broken and will be broken unless an adequate price increase occurs.”

The protests have also been criticised by beef processor ABP, which confirmed it will increase its base price for cattle next Monday (December 9).

In a statement issued this afternoon, a spokesman said the firm was “at a complete loss” as to why the protests were held at retail distribution centres this week.

“The Beef Task Force met on Tuesday, and Joe Healy and the IFA were fully aware that market indications pointed towards a cattle price increase in Ireland. This was reported extensively,” he said.

AgriLand understands that a minimum increase of 5c/kg is expected.

The protests at the two distribution centres have been led by the Irish Farmers’ Association (IFA) as part of its campaign for beef price increases.

The blockade started at 7:00am and is planned to last for 12 hours, according to the association.

IFA president Joe Healy said his organisation is demanding a significant price increase, adding: “Retailers have a powerful grip on the food chain and cannot shirk their responsibility to farmers.

There is too much buck-passing between processors and retailers in their rush to grab all the profits, leaving farmers in a loss-making situation.

“As far back as last August, we warned Minister for Agriculture, Food and the Marine Michael Creed that the retailers had to be present at the talks – but it never happened.”

ABP to increase base price for cattle next week 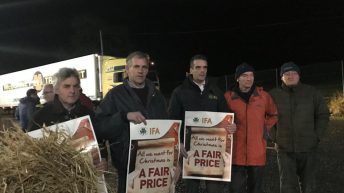