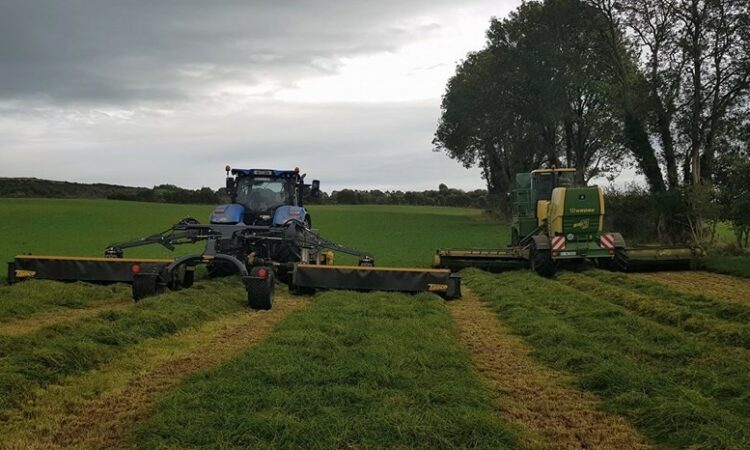 A new 34ft-wide mowing rig – comprising twin Tanco mowers at the rear and a fully-mounted unit up front – has been spotted undergoing field-testing.

In one instance, the rig was working alongside a Krone BiG M. The two outfits, working in unison, reportedly knocked 60ac of grass in just an hour and 35 minutes.

The Tanco-branded rig certainly is imposing; its working width is even wider than that of the Krone working alongside (by about 2ft).

The rig is pictured below in another field; this time it’s working ahead of a Kverneland rake and a McHale (Fusion) baler-wrapper.

This sizeable Tanco-branded mower is apparently being put through its paces by John Kennedy – a well-known agricultural contractor and engineer – based close to Nenagh, Co. Tipperary.

He has liaised with a number of Irish machinery manufacturers on various projects over the years. He is especially well known for having designed and built ejector-type trailers (specifically for use in agricultural contracting).

We’re keen to stress that there has been no official word (of the new mower) from either Tanco or John Kennedy as yet. These pictures (above) and this short video (below) have emerged online, however, showing the rig in action.

In any case, stay tuned to AgriLand for further details – as and when they emerge… 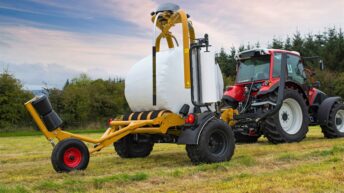 Latest wrapper can still do 5 bales in 3 minutes, but now it’s ‘easier’