Latest wrapper can still do 5 bales in 3 minutes, but now it’s ‘easier’

Tanco is one of several Irish manufacturers that will be showing its wares at the upcoming LAMMA show in the UK.

New on the stand will be the firm’s 1400-V high-speed wrapper; it’s the latest version of Tanco’s ‘1400’ family of trailed round bale wrappers.

According to Tanco, the 1400-V (1400 Variwrap) has been designed and built on the back of the company’s experience with the existing 1400-EH.

The patented ‘split-table’ of the 1400-EH, which was designed to allow simultaneous bale unloading and next bale re-loading, has been retained and improved on the 1400-V – with the addition of automatic loading.

The split bale table, which Tanco says is unique to the 1400, allows the back part of the bale table to lower independently to “gently off-load the wrapped bale”.

As the rear of the bale table lowers to off-load the wrapped bale, the front of the split bale table, to which the loading arm is attached, lowers to start the loading process of the next bale (to be wrapped).

The 1400-V sees the addition of ‘auto-load’. It is activated by a paddle – pushed in by the next bale to be wrapped as the wrapper approaches it. It also uses a loading sensor, which ensures that the front roller of the bale table is fully up and in position before the loading arm returns to its ‘home’ position – thus allowing the wrapping process to commence.

Tanco claims that the simultaneous operation of each part of this process reduces stress on the 1400’s chassis and “ensures stable loading of heavy bales”.

The 1400-V shares other features with Tanco’s existing bale wrappers, such as its telescopic ‘cut and start’ system, its direct gear-drive to the satellite arms and proportional hydraulics.

Key claimed selling points of the 1400 include its apparent low centre of gravity, whereby the bale is positioned forward of the axle.

The 1400-V can be bought with an optional ‘End-Tip’ kit, which is directly attached to the split table. It allows the operator to set bales on their end – in hilly conditions or on rough ground (where bales may be prone to puncture). 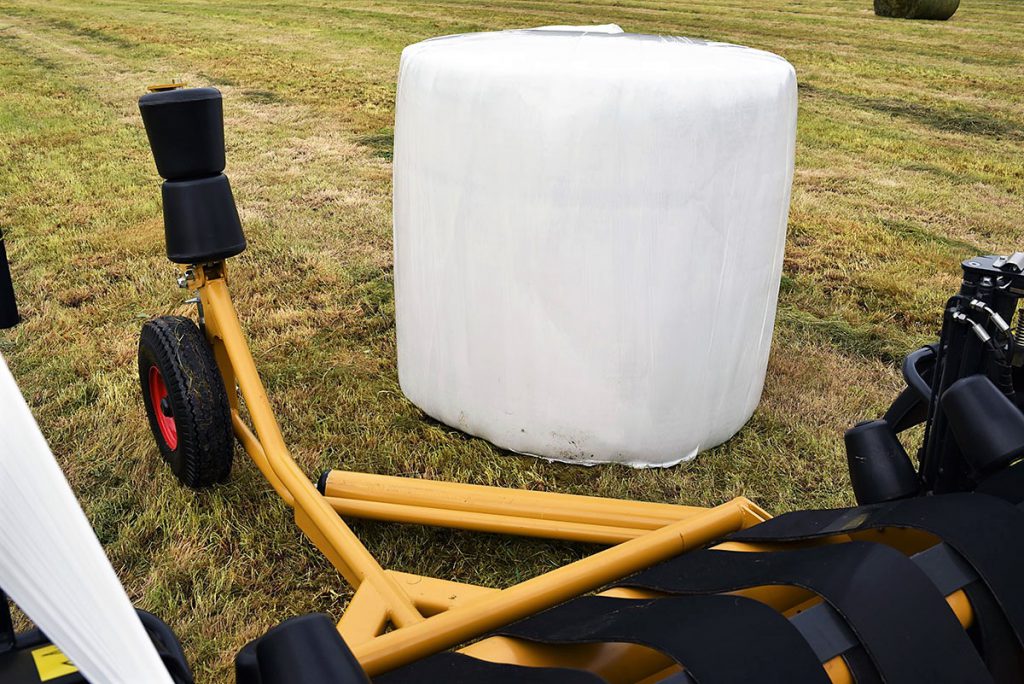 Tanco’s Michael Dollard told AgriLand: “The arrival of the new 1400-V is part of a wider roll-out of new and upgraded machines.

It is easier to use than the existing 1400-EH; the 1400-EH can already wrap 100 bales/hour at its ease – even when putting on six layers of plastic. That equates to five bales every three minutes.

“With that sort of output, the same tractor and driver [as used on the wrapper] could work a rake earlier in the day – and still catch up with the baler when operating the wrapper later on.”

Pics: Check out the latest and greatest at this year's LAMMA machinery show