What takes place behind the scenes at the Keenan factory in Co. Carlow? 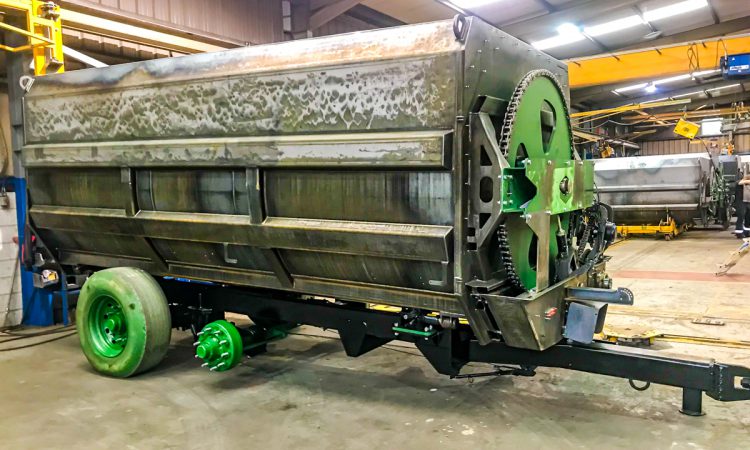 Keenan – based in Borris, Co. Carlow – opened the gates of its manufacturing facility to Irish dairy and beef farmers, along with machinery enthusiasts, earlier this week.

On the day, one-day-only special offers were available – including up to 20% off straight deals on machines from across the spectrum.

Speaking to AgriLand, Keenan machine inventory manager Michael Doyle (pictured below) outlined what happens to a second-hand feeder once it’s traded in to the Carlow-based site. He also told us what it takes for a machine to make the ‘approved’ grade. 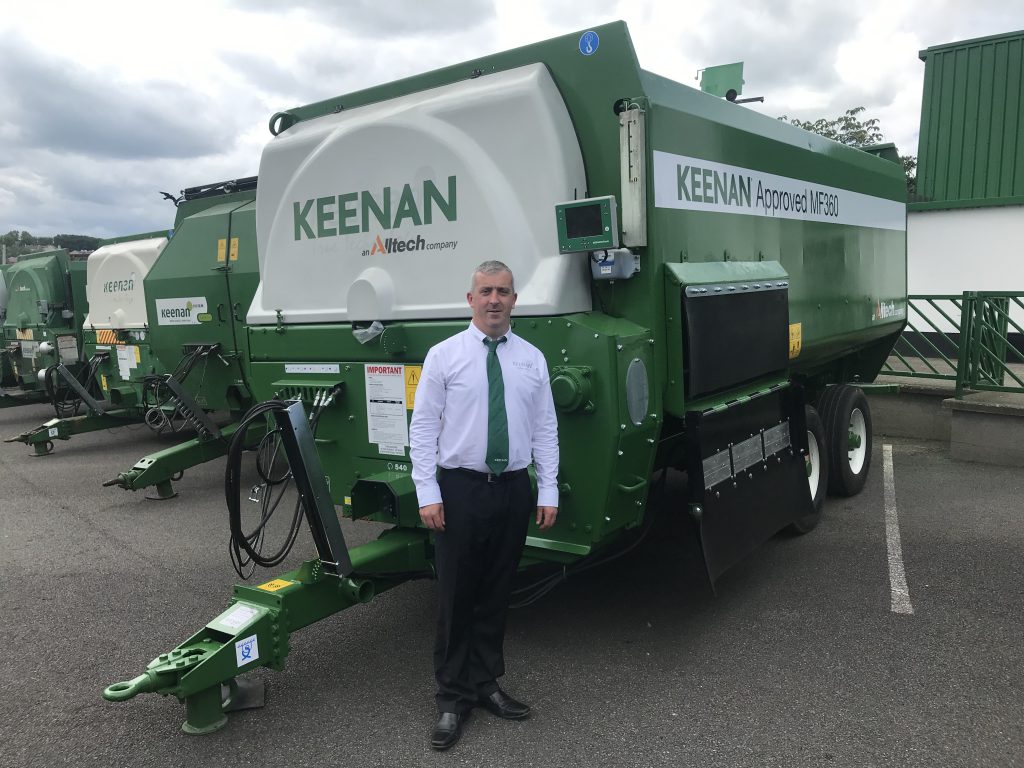 “Diet feeders come in varying conditions and types – ranging from fresh machines to older models. We’ll get machines that have been working everyday of their lives for 25-30 years, so the condition will vary.

“Firstly, when a machine comes to the factory, we’ll take a look at the physical condition and see how it looks.

“Naturally, we can’t make a silk purse out of a sow’s ear; that can’t be done. So, if it looks good, we’ll investigate further,” Michael explained.

Like any machine, wear and tear comes hand-in-hand and Michael outlined the main parts that have to be examined on every paddle mixer – the body, chains, blades and the paddle rubbers.

Michael explained that the ‘approved’ range comprises machines that are “top-of-the-range, second-hand units”. The timeline from in-take to finished article for an ‘approved’ feeder is approximately two-to-three weeks. 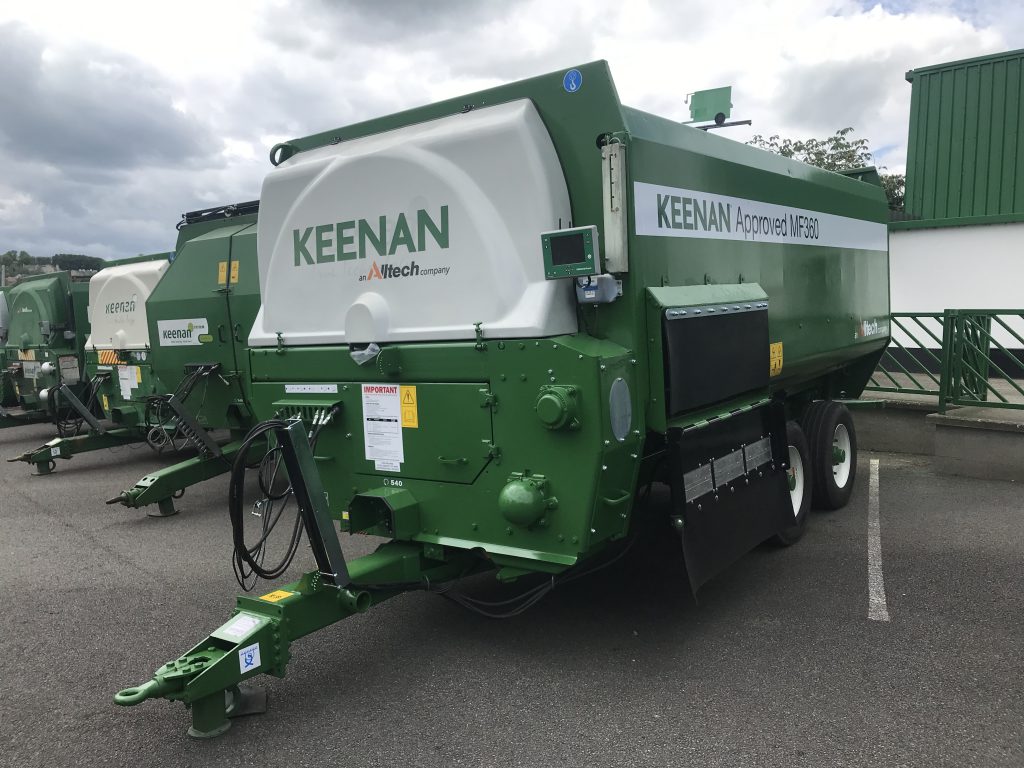 “We strip these down completely; we strip out the gearbox and the auger, so we will go through everything to make sure it’s fully functional and put it back together.

“Then it’s shot-blasted and re-painted; new stickers are then applied. The ‘approved’ machines are all less than 10 years old. We don’t approve those that are over 10 years old, but every model in theory is available as ‘approved’,” he said.

“All ‘approved’ machines have new hydraulic pipes, tyres, hoses, rubbers and so on. Other second-hand machines range from 2007 to 2012.” 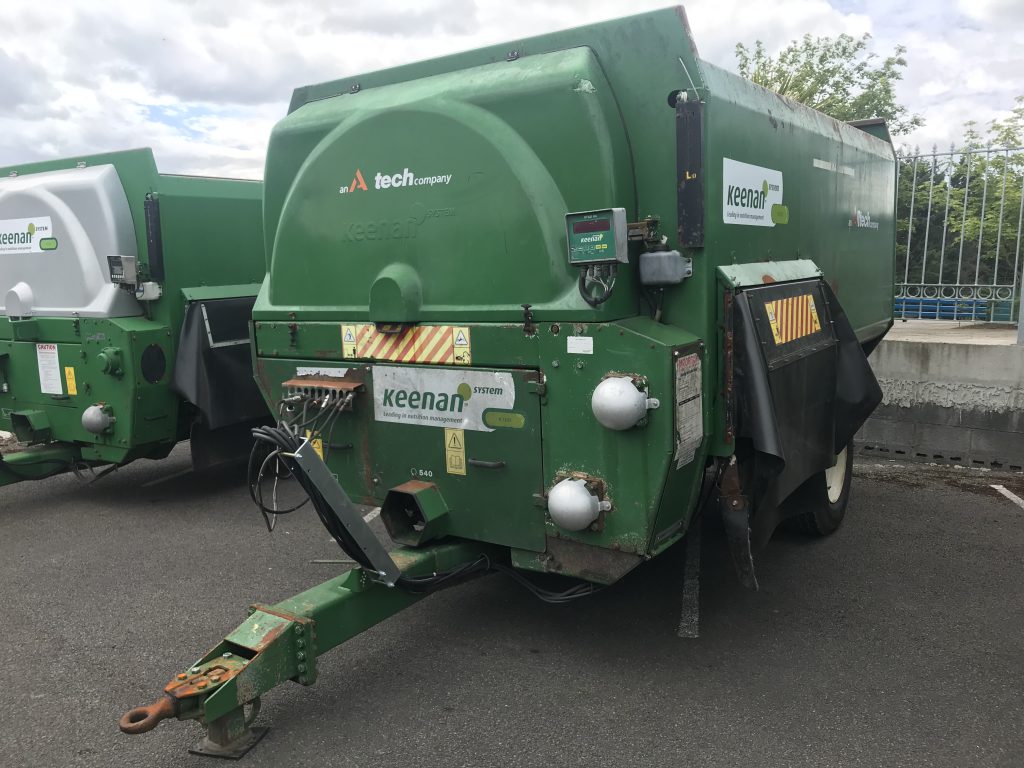 Commenting on why farmers upgrade their machines, he said: “The most common reason guys change their machine is that the paddle rubbers and the body blades are worn. So, the machine is actually working as an ‘easy feeder’.

“Other reasons include: chains; tensioners on the chains; and springs around the drive systems. We also look at the bearings.

“When we open up the front covers, we look to see are the chains slack and that’s a tell-tale sign; if it’s tensioned up, the machine has been looked after. Obviously, you look to see has the machine been greased,” he added.

Keenan – which claims to have sold over 30,000 machines globally – provides diet feeders to both dairy and beef farmers in Ireland and the company is expanding its range.

“Our main customer base is the dairy farmer, but we do have a lot of beef farmers and there are more beef guys coming to us now, as they realise the difference in feed efficiency. 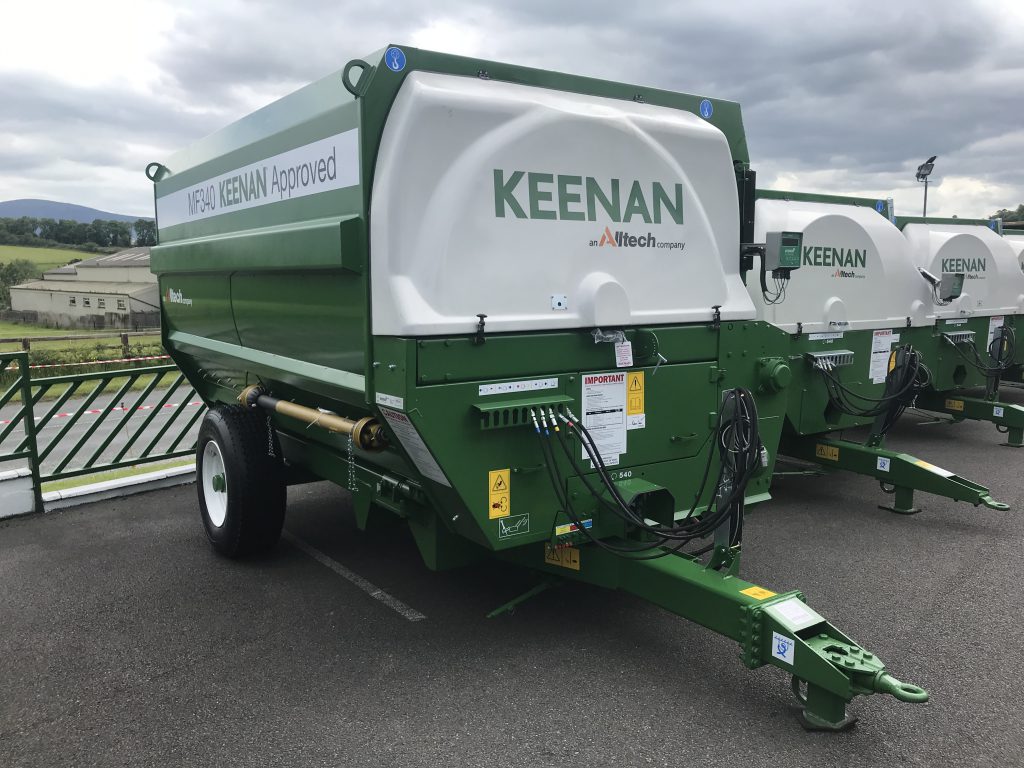 “The typical-sized machine for a beef farmer tends to be the smaller range – the 14-16m³ MechFibre machines are popular. We are finding a lot of dairy men are going from the 14m³ [machine] to a 20-24m³ model.”

“Typically, an ‘approved’ machine will work out at around 70% of the cost of a new one. Of course, the prices of new machines depend on the individual models and extras – such as bale handlers, hardened body liners and so on.”

Keenan, part of the Alltech empire, unveiled its brand-new tub feeders in 2017; the tub feeders result from a tie-up between Keenan and Italian firm Storti.

Commenting on this arrangement, Michael said: “The self-propelled was key for us and Sorti provided the engine part of that unit.

“The vertical-auger feeder was an add-on to that. It brought us into the market very quickly and we didn’t have to go down the route of development; the decision was made and within six months we had a product on the market.” 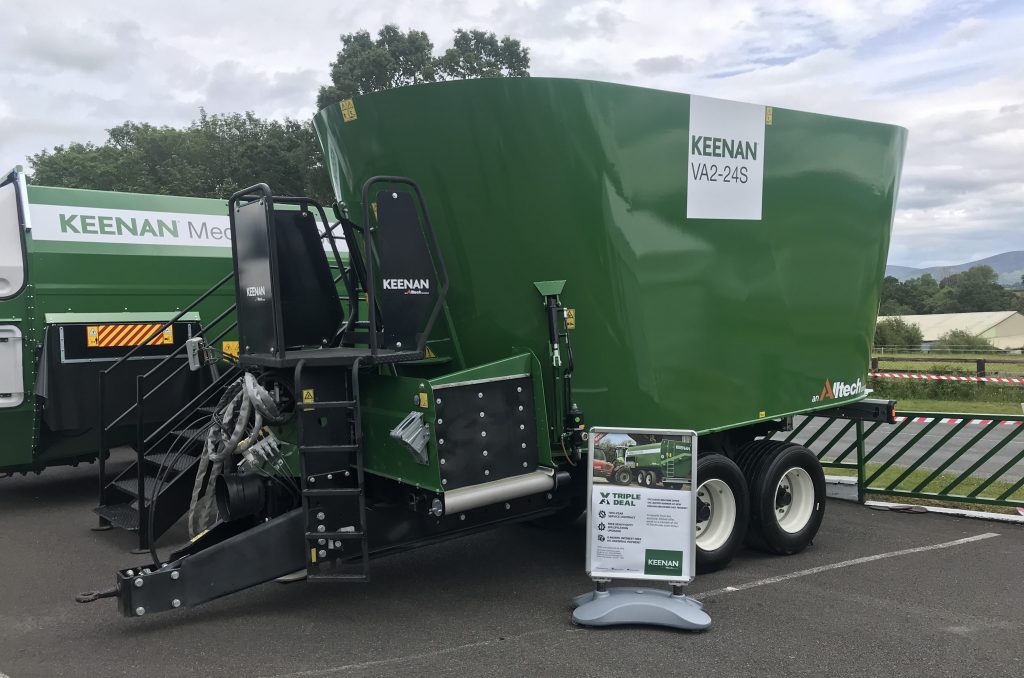 To date, two self-propelled diet feeders have been sold in Ireland – to dairy farmers in Co. Donegal and Co. Limerick.

As part of the open day, a live demonstration took place showcasing a Keenan MechFibre380 equipped with a bale handler, steering axle, fold-down tray, magnets, an InTouch box and a capacity of 24m³.

Keenan area sales manager Melvyn Dowling explained that the diet feeder has the capacity for five-to-six bales, depending on dry matter (DM).

A Keenan VA2-24S tub feeder was also put through its paces. This twin-vertical-auger machine – also with a capacity of 24m³ – has a 20mm floor, a bale handler and an InTouch box. 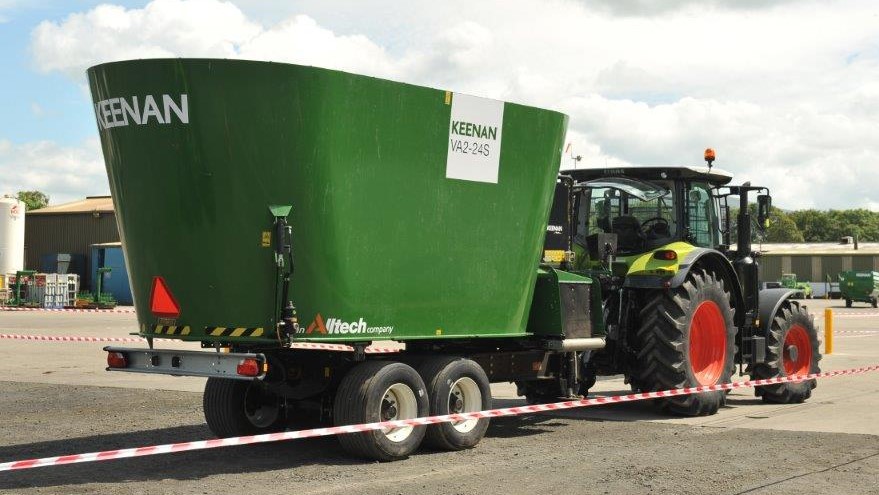 Cathal Bohane – who heads up the nutrition division at Keenan – outlined that the MechFibre380 works at a rate of eight revolutions/min, while the vertical-auger feeder operates at 25 revolutions/min.

Commenting on the importance of a consistent diet, he said: “When we looked at mix quality initially, we mixed the exact same ingredients and the exact same proportions in two different ways, and we got 1L of a difference in milk production from the cows, in addition to an increase in protein.

“The rumen was healthier in those animals. The InTouch controller can store all the diets and this unit will guide the operator through the correct loading order and amount of each ingredient – leading to a consistent diet.

“At the end of the day, the diet you have on paper is completely different to the diet that is fed to the animals,” he added.

Pat O’Donovan runs a 160 dairy cow herd on a 58ha grazing platform in Whitegate, Co. Cork; the farm is stocked at 2.75LU/ha.

Kevin O’Hanlon is a dairy farm manager in Co. Wexford. The farm is home to 170 spring and autumn-calving cows and the grazing platform is stocked at 2.5LU/ha.

Both Pat and Kevin explained that they have achieved increased animal performance and improved the health of the herd, with reduced cases of milk fever and reduced retained placentas. 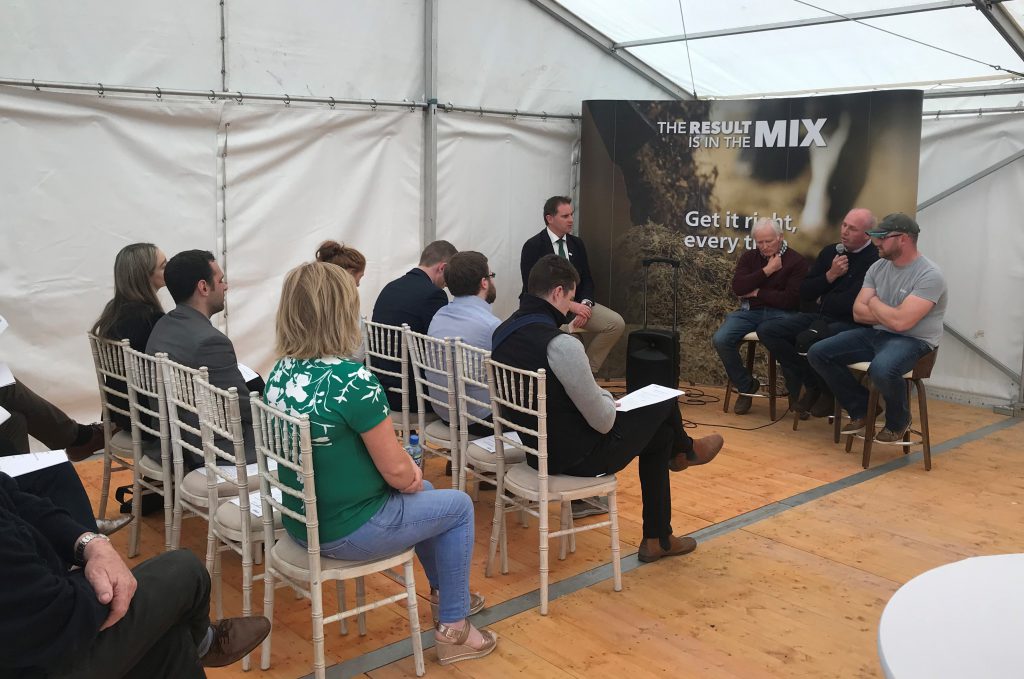 On the other side, James Kent from Blarney, Co. Cork, operates a 170 spring-calving pedigree Limousin herd, slaughtering bulls under-16 months and selling heifers as stores at 20 months.

James also outlined how he has achieved improved animal performance through better feed efficiency and reduced the incidence of health issues.

The impressive site in Borris, Co. Carlow, is home to approximately 120 employees including administrative and manufacturing personnel.

Production amounts to about 10 machines/day and the top-performing markets for Keenan are Britain, Ireland and France.

There are many different stages involved in the production of a Keenan diet feeder. Click on a thumbnail in the gallery below to see examples of these. 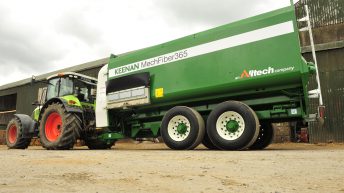