There will be widespread rain this weekend – Met Eireann

There is widespread rain promised this weekend, with more wet and windy weather next week, according to Met Eireann.

It will be cloudy this morning (Friday) with widespread rain and drizzle which will clear eastwards, it said.

It will become mostly dry by early afternoon with some sunny spells developing and a few isolated showers may affect Atlantic coastal counties, Met Eireann said.

According to Met Eireann, tonight (Friday) will be mostly dry with good clear spells over the east at first but rain along Atlantic coasts will become heavy and spread eastwards before morning.

Lowest temperatures will be 8 to 10 degrees in mostly moderate southerly breeze but fresh along coasts, it said.

Looking to tomorrow (Saturday), it said that widespread rain during the morning will gradually ease and clear to scattered showers in the afternoon with some sunny spells developing.

There will be top temperatures Saturday of 11 to 14 degrees in a mostly moderate southwesterly breeze, it said.

Saturday night will be mostly dry with just a few lingering showers in the northwest, however, towards morning rain will push into the south and west, it said.

Southerly winds will be mostly light but freshen towards morning and Met Eireann has said lowest temperatures will be 6 to 9 degrees.

Advertisement
Sunday will be cloudy and breezy with widespread rain which could turn heavy at times. 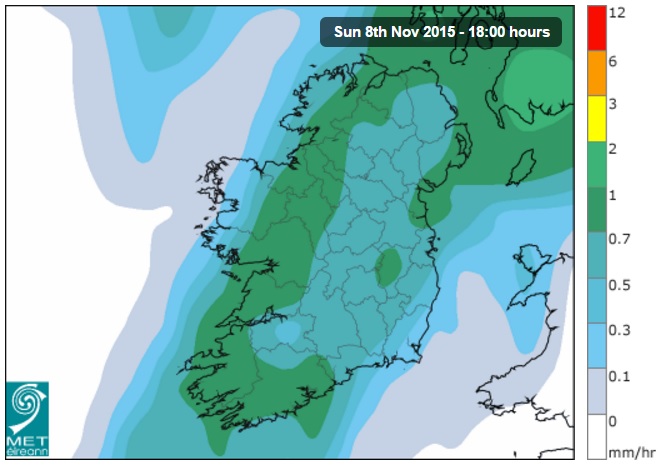 Top temperatures will reach 13 to 15 degrees in a fresh southerly breeze and the rain will clear eastwards later on Sunday evening with good clear spells developing and winds ease for a time, Met Eireann said.

However, it has said that another spell of rain will push into the west before morning in a freshening southerly breeze.

Looking to next week, Met Eireann has said that Monday will be wet and windy as rain becomes widespread and south to southwesterly winds will increase strong.

It will be very mild with top temperatures reaching 13 to 15 degrees in the afternoon and it’s promised it will stay very mild on Monday night as southwesterly winds continue to be strong.

According to Met Eireann, outbreaks of rain will gradually ease later on Tuesday and winds decrease moderate.

It will be dry for a time on Wednesday but another spell of rain is likely later, it said and it will turn fresher and temperatures return to more normal values for the time of year.