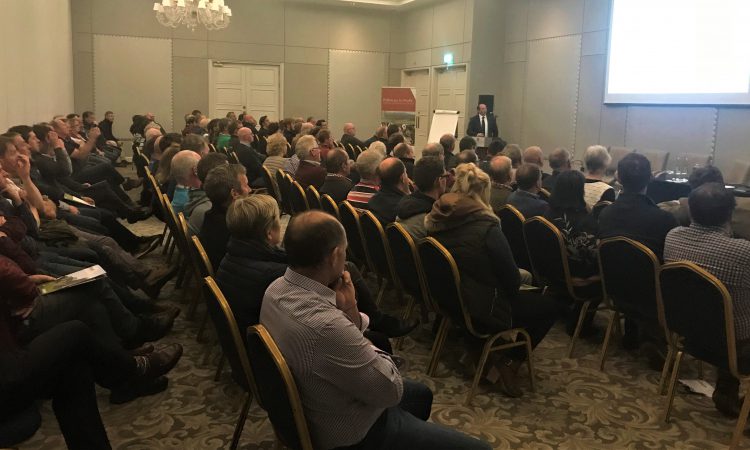 The cost of disease is a major drain on farm profitability; particularly when you take into consideration the indirect costs of diseases, according to Dr. Eoin Ryan, assistant professor at the School of Veterinary Medicine in University College Dublin (UCD).

However, Eoin says, indirect costs are often underestimated by farmers and can be very high in certain situations – contributing to a sizable proportion of the total cost.

“A fatality for example has the direct cost of removing the dead animal and the indirect cost of the replacement heifer coming in. This cost of fatality comes in at around €2,200,” explained Eoin.

During one of Alltech Ireland’s ‘Pathways to Profit’ seminars last week, Eoin discussed some of the ‘important diseases’ which are having the greatest effect on farm profitability.

More work by Teagasc found that if we could drop the SCC nationally by 10%, it would save the country about €37 million.

“This just shows that mastitis is a huge cost on Irish farms and a major drain on dairy profitably – with the vast majority of losses due to yield and culling,” he added.

Poor fertility is another major issue on Irish farms and can result in substantial losses at farm level.

“Teagasc research, for instance, has estimated that poor fertility in an Irish herd is costing €100/cow in the herd or 1.5c/L.

“The major causes of reduced fertility are management and nutrition, but also lameness and infected diseases.

“However, anything that affects the cow from calving onwards will extend that calving to conception interval and will eventually lead to a loss,” explained Eoin.

Eoin explained that dairy farm expansion has lead to greater issues around calf health – due to pressure on housing facilities, an increasing number of calves born in a short space of time and a shortage of labour on farms.

The main health issues are diarrhea and pneumonia along with other issues such as abdominal bloat – due to more automatic calf feeders on farms – and summer scour syndrome.

“Diarrhea is a serious loss in terms of treatment costs and fatality rates associated with it; particularly, with things like cryptosporidium. Heifers are the future of the herd and if you have increased losses in the calf herd this will affect your profitability down the line,” he highlighted.

In terms of nutrition, Eoin says, it is the single most important factor underlying everything in the herd in terms of disease.

“If you can get nutrition right you will prevent the majority of important diseases; particularly, in the cow around the calving period, in terms of things like milk fever, displaced abomasum, uterine infections,mastitis, etc. which are all related to the cows immune system.

If you look at the direct and indirect costs of retained cleanings it comes in at around €400.

The prevalence of lameness has also increased in herds that have expanded. Overcrowding in housing and increases in walking distance among other things have contributed to this.

Commenting on the losses associated with this, Eoin said: “The cost of lameness is quite high, costing on average €300, but can range from €150 up to €500.

Sole ulcers for example – including both direct costs and indirect costs – come in over €500.

In conclusion, there are many disease issues which are costing farmers, and the industry as a whole, a significant amount of money. It is how we manage, control and prevent these herd health issues that will contribute to the sustainability of the sector in the future.