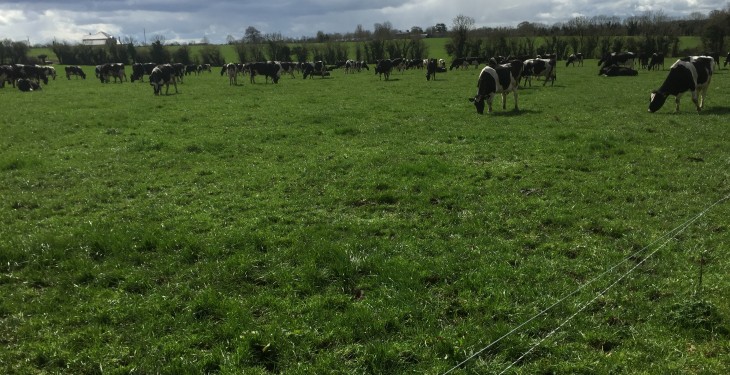 A dairy farmer in Co. Kildare has ambitious plans to increase his herd size by 33% over the next five years, without increasing the amount of land he farms.

Shane O’Loughlin, one of the Teagasc/Glanbia Monitor farmers currently milks 180 cows in Monasterevin and he plans to raise cow numbers to 240 by the spring of 2021.

Speaking at a recent farm walk, O’Loughlin said that the main reason for the planned increase is to ensure that the farm is capable of supporting two families; both O’Loughlin, his wife and two children and his parents.

The dairy farmer also said that the farm is capable of holding the extra stock without the need to bring extra land into the system.

O’Loughlin’s herd is made up of mainly Holstein Friesian cows, split between spring and autumn calving, as 50% of the milk produced on the farm is sold for processing under fixed price contracts.

We plan on doing as much as we can on the 64 hectare milking platform. The plan is to milk 240 cows on a grass-based system with a meal feeding level of 800kg/cow.

To ensure that he reaches the targeted number of cows by 2021, O’Loughlin said that he will keep 70 replacement heifers on the farm each year.

But, along with increasing cow numbers, O’Loughlin is also making a number of key changes on his farm to ensure that the expansion is profitable.

Over the next five years, he will aim to increase the amount of grass grown on the farm, tighten the calving pattern, while also increasing the milk solids produced from each cow.

The Kildare native said that expansion plan means that amount of grass grown on farm will have to increase to meet the demands of the additional 60 cows.

Last year, the farm grew 13.1t of grass per hectare, but this will have to increase to 16t per hectare by 2021 to ensure that there is an adequate grass supply for the cows.

To ensure that the farm is capable of growing the extra grass, O’Loughlin started to focus on the soil fertility levels last year.

At least 50% of the land on the farm is index 1 and 2 for Phosphorous and Potassium. We are starting to target the fields with the lower indexes.

He also said that the additional grazing pressure caused by the extra cows will help grass growth on the farm.

“Last year, there was not enough cows on the milking platform to graze the grass and as a result we had to take out surplus grass as silage,” he said.

Another area where O’Loughlin is paying more detail to is the six-week calving rate.

Last spring, 66% of the cows calved within a six-week period, but he plans to increase the calving rate to 90% next spring, which will have a major impact on profitability.

To ensure that he achieves this goal, O’Loughlin said that he plans to put more of a focus on the pre-breeding period this year, which will help him identify problem cows earlier.

Pre-breeding is a big thing and all the cows will be tail painted next week. In previous year’s we did not pay enough attention to the pre-breeding period.

O’Loughlin also said that he plans to improve the average milk solids produced by the cows in his herd and a shorter calving period will help him to achieve this goal.

This increase will be worth an additional €30,000 to the farm in milk receipts based on the budgeted base milk price of 28c/L.

Labour on the farm

O’Loughlin also spoke about the labour required on the farm to milk 240 cows.

Currently, O’Loughlin and his father both work on the farm along with a local farmer who milks 12 times each week and an additional staff member that works on a part-time basis.

As cow numbers increase, O’Loughlin said that the part time staff member could be changed to full time and to allow for this he has increased the labour budget from €41,000 this year to €55,000 in 2021.

Managing in a difficult spring

Slower growth rates spring resulted in the farm running short of grass in the first three months of this year, O’Loughlin said, as the farm grew 3t less grass this spring compared to last year.

And as a result, an additional silage supply had to be brought in to ensure that the cows were fed properly.

“I purchased about 50t of silage this spring to meet the deficit. It was good quality with a DMD of 80%.

“I bough in the silage as I did not want the condition of the cows to suffer three weeks before the start of the breeding season,” he said.

The milk protein volumes also dropped during the difficult grazing conditions this spring, he said, with protein levels falling to a low of 3.06% during February, before improving to 3.32% in recent weeks.

Second rotation covers are also lower this year compared to last, he said. The highest cover is currently 900kg per hectare, this should be close of 1,400kg per hectare.

However, despite the slower than normal grass growth rates, growth has shown some signs of picking up over the past week, with daily growth rates increasing from 15kg/day two weeks ago to 32kg/day last week. 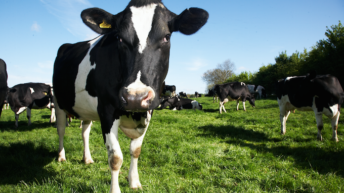 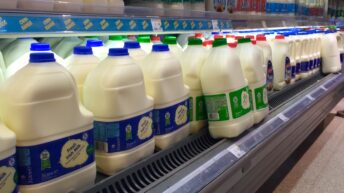