NI indepth: ‘Most of my meetings are held around the kitchen table and I really enjoy that’

For Tyrone farmer’s son, Rodney Brown, work as Danske’s new deputy head of agriculture is about much more than just farmers’ finances.

Brown joined the bank straight from college and within a year had already got involved in the agri-business team, of which he has quickly rose through the ranks.

“Just talking to farmers on a daily basis was just something I have always enjoyed – and that’s really what we do,” he said.

“A lot of the time farmers will just want to sit down and talk and to make sure they’re doing okay compared to everyone else.

Most of our meetings are held around the kitchen table – and you find people are very open when they are talking at their own kitchen table.

“They’ll discuss things with you – they’ll share things with you and they’ll ask you things they maybe wouldn’t have asked if they are sitting in a formal meeting; while most of our meetings are still structured, there’s a certain easiness about them.

“You could end up talking about anything; financial services are really just part of what we offer.”

Growing up in wellies

Brown joined the bank straight out of college at just 22, but he has always had a love for farming.

He said: “At that stage, the bank had just started to develop a clear-cut agriculture section and although I was only just new into the bank, the then branch manger suggested I give it a go.

“He got me into the lending end because he wasn’t familiar with agriculture; but, it was something I was interested in – so I was keen to learn.” 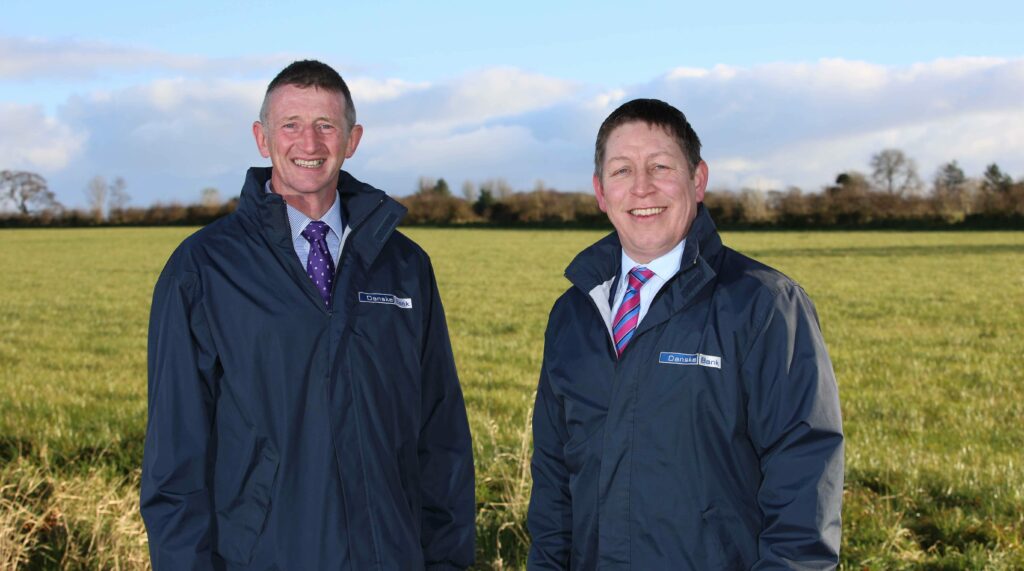 Brown grew up in Fintona, Co. Tyrone on the family farm.

He said: “My grandfather would have farmed dairy cattle until around 1980. But a farm accident made him think twice about dairying and he went into sucklers after that.

“The accident wasn’t anything too serious; but, it made him realise dairying was just a bit demanding for him at that age – so he went into Aberdeen Angus cattle instead. My father still lives on the farm, but lets the land out.”

Brown even tried his hand at keeping his own suckler cows, juggling corporate work with country life.

It is hard; but, I’ve just always been involved in agriculture. Most of my school time would have been spent on the farm, so it was just a natural thing to do for me. I enjoyed the work and I enjoyed working with the animals, so I wanted to keep on farming in some way.

“I suppose coming from a farming background and having a reasonable knowledge of agriculture along with my business-related degree, it did all pull together. When I joined the bank I found I really did enjoy the work too.

“I realised it was important to create an atmosphere where everyone is comfortable to talk.

“There are always difficult times – looking back over the last five years you’ve had a weather crisis, a fodder crisis, then next thing you’ve had a sustained period of low milk prices; people are concerned through those times about how they will keep going, but if you listen and understand someone’s problems – then you can best address them.

“Just because we are a bank doesn’t mean the help has to be financial – you can point them in the right direction of who to speak to.

“We will always say talk to your accountant or, for example, a dairy farm specialist – I couldn’t walk on to a dairy farm and have that specialist knowledge to tell them how to run the place.

“[Using the right advisors] can bring an outside view. We can take a look at the financial side of things very easily, but we can only analyse it so far – we can look at the accounts, we can ask questions, use projections and ask them to use cash flows; but, as for the technical side of things – if we can get someone to go on to the farm that’s able to give us a very thorough account that helps too.

I always say that even the best farmers could be doing nine things right out of 10 and one thing wrong, and even improving one or two small things could make a big difference to the overall business.

With so much change on the horizon, with Brexit looming, many farmers are worried about how they will plan ahead. However, Brown said the team will “always do its best to support farming customers“.

He said: “I suppose we have always taken the approach that any reform will not be decided and delivered on your doorstep the next day.

“As we get closer to Brexit, we will have a better idea how things will look once they start to talk about trade deals and once the details of that start to come out, as well as how any new agriculture policy will look.

“But at the end of the day business still goes on and decisions still have to be made, so we take the approach that we will always give long-term support to farmers.”

NI indepth: Farming with WhatsApp and taking Brexit by the horns

NI indepth: 'I was anxious the members hadn't got the message this could be the end of Balmoral Show'