A road in Pembrokeshire in the UK was closed for over six hours on Tuesday, August 20, following a collision involving two tractors.

It is understood the two tractors were drawing silage when they collided at Llanychaer near Fishguard, Pembrokeshire.

It appears one tractor was pulling a trailer-load of silage when it collided with another tractor with an empty trailer.

The tractor pulling the trailer-load of grass crossed the roadside ditch and the trailer detached while the tractor appears to have tumbled a distance down the field.

Both tractors appear to have been ‘wrote-off’ as a result of the incident.

The rural crime team in Pembrokeshire took to Twitter to explain that members of the police attended the two-tractor collision at 4:45pm on Tuesday, August 20. 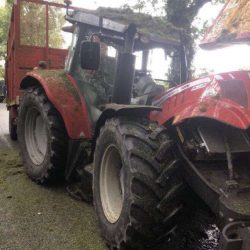 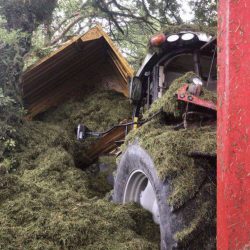 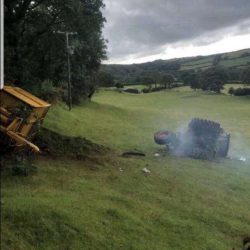 According to the Rural Crime Team, the drivers escaped the incident with “no serious injuries”.

The road remained closed until 11:00pm.

Meanwhile, back in Ireland, around 140 sheep were killed when a fire broke out in a hay shed on farmland in the area of Drumbuoy, Lifford, Co. Donegal, on Sunday, August 18.

Gardaí confirmed that a number of fire units attended the scene after the alarm was raised at around 1:00pm, and while there were no reports of any injuries to people, “a number” of sheep did die as a result.

Local media in Donegal is reporting that the number of dead sheep stood at approximately 140.

Gardaí have said that investigations into the incident are continuing.

The incident is not being treated as suspicious, Gardaí confirmed.