IFA membership fee to increase in 2020

The annual fee for membership of the Irish Farmers’ Association (IFA) is set to increase from January 2020, it has been confirmed.

The membership fee will be increasing by €10 approximately, depending on the farmer members.

In addition, the acreage charge is going from 70c/ac to 90c/ac, it has been confirmed.

The increase comes as the farm organisation looks to elect its 16th national president in Dublin today, Tuesday, December 17.

Tim Cullinan is in the lead in the IFA presidential election at the conclusion of the first count, with 8,334 votes cast in his favour.

Meanwhile, Angus Woods has been eliminated after the first round, with 7,149 votes going his way. This leaves it as a two-horse race between Co. Tipperary’s Cullinan and Co. Cork’s John Coughlan, who has achieved 7,402 votes thus far.

Meanwhile, a recount has been called in the race for deputy president for the Irish Farmers’ Association (IFA), following a difference of just 36 votes.

The recount was called by Thomas Cooney, who, at the end of the first count, found himself just 36 votes behind Brian Rushe. 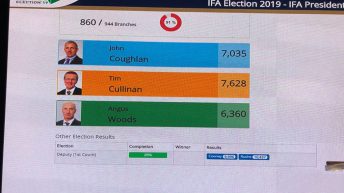