How is the Grange dairy calf-to-beef herd performing? 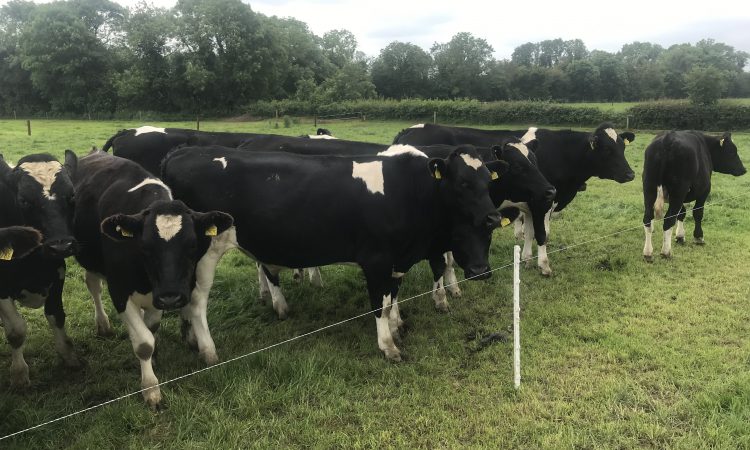 Recently, the Teagasc Green Acres Calf to Beef participants took part in a technical day in Teagasc Grange, Co. Meath. As part of the day, the farmers were given an insight into the dairy calf-to-beef study currently underway on the farm.

Established in the spring of 2018, the objective of the trial – which is headed up by researcher Nicky Byrne and technician Donall Fahy – is to compare the physical and financial performance of progeny from both Holstein Friesian and Aberdeen Angus sires used in the dairy herd.

These sires vary in breeding value for carcass weight and conformation and are managed in a grass-based system, aiming to be finished as steers under 24-months.

Holstein Friesian and Aberdeen Angus sires are selected as they represent the main calf breeds coming from the national dairy herd in Ireland.

Calf purchases are made on certain criteria. All the animals must be born to Holstein Friesian dams and these cows are inseminated from March 27 up until June 25. So, calves are born from the first week of February up until the end of March.

In addition, the Angus sires (AI) must have a minimum Terminal Index reliability of 60%. And, crucially, all sires must have a calving difficulty of 3.5% or less.

“We also will be establishing production parameters for this type of system going forward,” researcher Nicky Byrne said. “When the last blueprint was drawn up for calf-to-beef, we probably had a different type of dairy cow in the country.”

Other measurements during the trial  include: the live weight; grazing efficiency; winter-feed intake; linear measurements; and slaughter performance of each genotype. Furthermore, all inputs into each system are fully costed and measured to determine the contribution of each genotype to farm profit.

The calves are purchased by Donall Fahy based on age and health (not hand picked), and arrive on-farm at 21 days-of-age, weighing 53-54kg live weight. Electrolytes are fed on arrival to rehydrate the calves and clean out the calves’ system.

They are then allowed to settle for 24 hours before being vaccinated – intranasally – for IBR and pneumonia.

“This proves to be very important when you are mixing a large amount of calves from 50-60 different herds,” Nicky explained.

“When we are mixing all these calves, there is a high-stress environment; we want to get a rapid response so we are going intranasally; booster vaccinations are administrated one month after.”

The calves are allowed to further settle for a 10-day period and assigned onto one of two different milk feeding treatments.

“We start them off on 6L/day and we either bring the calves up or down on to 8L/day or 4L/day. We are looking to assess the effect of this milk feeding treatment on calf performance, the performance at grass and the overall lifetime performance of the progeny.

“What we can see so far is that you won’t pick out those calves from either treatments,” Nicky added.

While the calves are offered two different milk feeding levels (twice-a-day (TAD) feeding), they all have access to ad-lib concentrate. The calves are individually stall fed, as individual calf intake is measured; everything is weighed-in and weighed-out.

Some 145 spring-born calves were purchased in 2019; two calves were lost within 24 hours of arrival due to ruptured stomach ulcers, resulting in a mortality rate of 1.5%.

“Because we have a milk feeding trial on-going, we need weaning criteria,” Nicky explained. “So typically, we like to see a calf that is greater than eight weeks old, eating more than 1kg/day for four consecutive days and weighing 85kg.

“However, we found that hard to achieve with the calves receiving 8L/day until we started weaning them; they didn’t go past 1kg/day, but they were eating concentrate and were well accustomed to it.

“We weigh calves on a weekly basis during the rearing period and once calves hit 85kg, they are weaned over a five or six-day period depending on their level of milk feeding,” he added.

Calves are then turned out to pasture and they are fed concentrate for three weeks post turnout; they then move on in their grazing group on a grass-only diet.

The 2018/2019 winter period was relatively short on the farm. The cattle were housed for 82 days and turnout was achieved on February 12.

Nicky outlined that an early turnout in a calf-to-beef system is crucial.

“In calf-to-beef, if you don’t start grazing early in the spring, you are going to be up against it because you start off with a low demand. 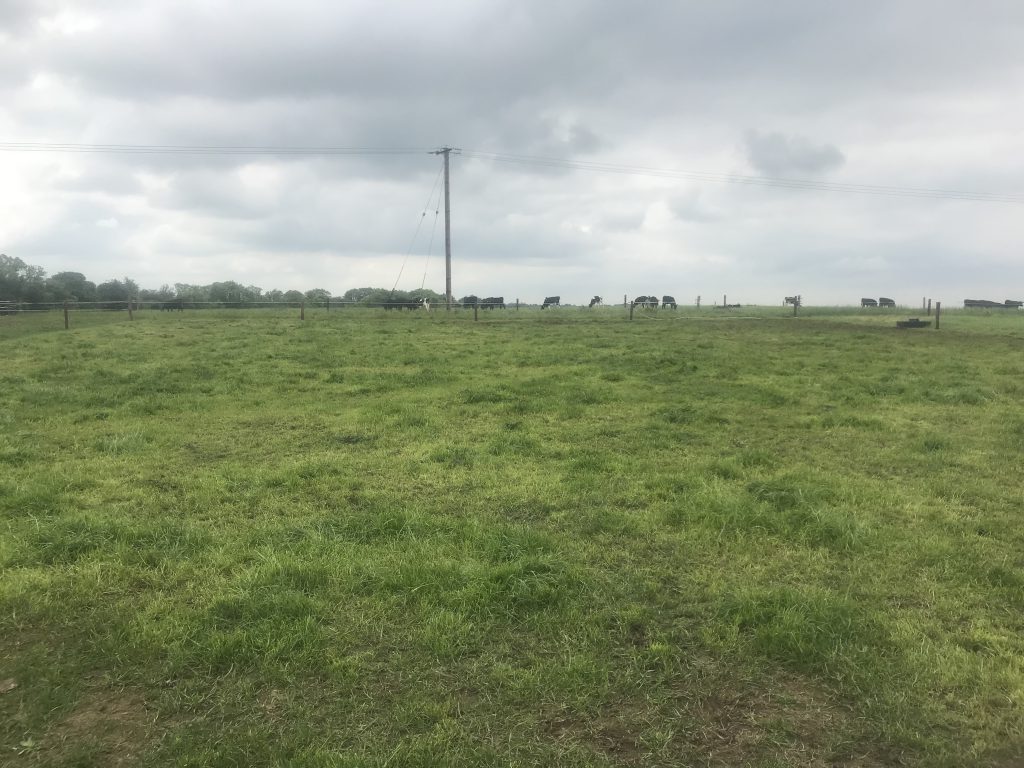 “If you delay turnout until the middle of March, you will be under a lot of pressure to have the first rotation completed and get your silage ground grazed-off, and it will hit in terms of sward quality later on in the year.”

Due to poor weather and ground conditions under-foot, all of the groups were re-housed for just over two weeks in March, which subsequently delayed the first grazing rotation. And, as a result, the remaining area of the first rotation was cut as surplus bales in early April.

Commenting on the grazing strategy, Nicky said: “We are really strict on our grazing residuals. We graze to 3.5cm for the first grazing rotation and that has stood to the swards in terms is sward quality.”

Due to the growing demand of the herd across the grazing system, and the need for high-quality silage, 56% of each farmlet was closed for first-cut silage.

“All the paddocks with the exception of some were grazed and we had a staggered first cut. The first of it was cut on May 14 (paddocks that weren’t grazed) and we got an average yield of 5.3t DM/ha from that.

“There was only 100kg DM/ha of a difference between the paddocks that were grazed on February 12 and those that weren’t grazed at all. However, where the paddocks were grazed, the regrowths were green at the base and will result in high-quality, leafy silage.”

After the weather improved again, the remaining first-cut silage was harvested and this yielded 8t DM/ha. However, due to the heavier cover, grass regrowth was slow.

Grass is allocated in 48-hour blocks and every group of yearlings graze down to a residual of 4cm. Before cattle enter a paddock, two strips – 10m long – are cut; this is weighed and dry matter (DM) and nutritive value analysis is carried out. 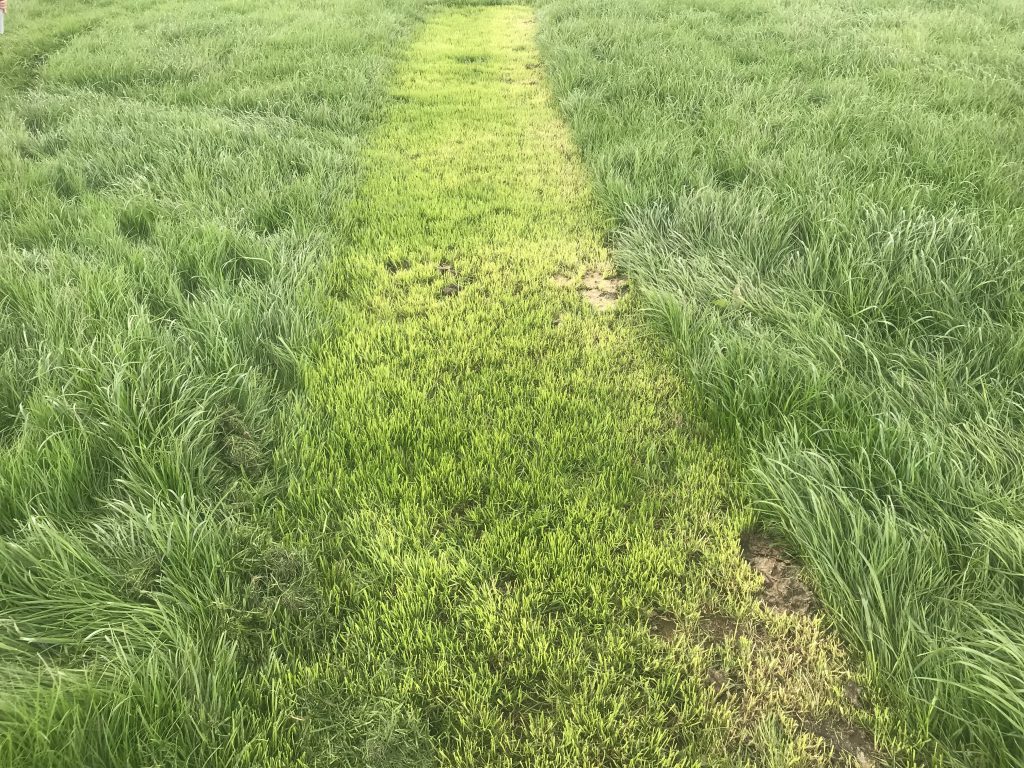 Each farmlet consists of 17 paddocks across a heavy clay soil type. A large proportion of the farm was drained and reseeded this year.

Commenting on the study, Nicky said: “We are getting a lot of interest from the dairy side on this trial; they need a viable calf-to-beef sector.

“One of the big things that is under-pinning the social licence of dairy production is the calf. Also, labour is a big constraint on farm. Dairy farmers need to get calves on the ground relatively easy with no hassle and get the calf off the farm.

“So, if a farmer wants to get calves moved he/she shouldn’t mind the few extra questions about the genetics and management. There’s a lot more focus on the bulls that are used on the dairy herd this year.”

Technician Donall Fahy added: “If farmers can build up a good relationship with dairy farmers; that they know this farmer will come back and buy calves again next year – that’s what needs to be done.” 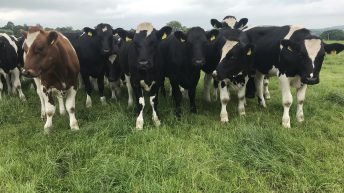