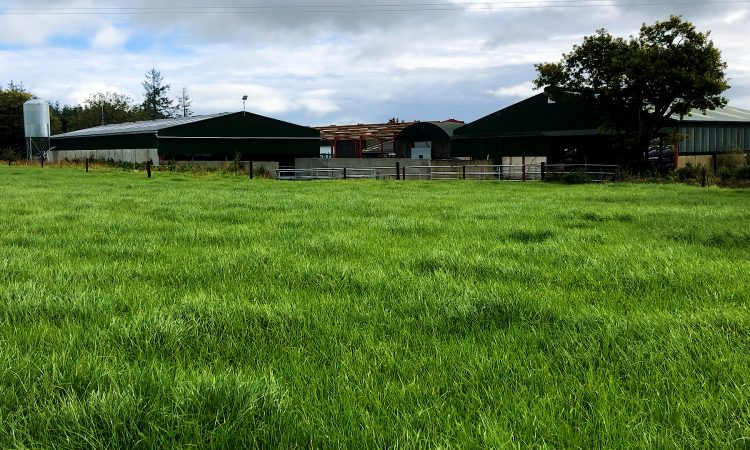 The father-and-son team have been in partnership for the past 20 years and they have been gradually expanding their herd over that time.

When TJ came home full-time, his father was milking 60 cows. However, since then the herd has more than doubled in size.

This increase in cow numbers meant that the milking and housing facilities on the farm came under pressure, so the duo decided to install a new milking parlour and cubicle house – some of which is still under construction.

Speaking to AgriLand about the farm’s transition, TJ said: “We have been gradually improving all aspects of the farm since I came home.

“The first two elements of the farm that we looked at were cow numbers and grass. If we got those two right then we said we would look at putting money into a new parlour and more housing facilities.”

The father-and-son team are milking a herd of 126 cows, which, as mentioned, are a Holstein-cross British Friesian type cow.

TJ added: “I started with a British Friesian base herd at the beginning. However, over time, we introduced more Holstein genetics into the herd.

I’d say, as of now, the herd is 80% Holstein and 20% British Friesian. They are a good solid herd of cows that are doing well for us.

“Even though the cows are predominantly Holstein, they’re not the ‘real Holstein’ and we find them very low maintenance.”

He explained: “This year, the cows peaked at 32L and, at the moment, they are doing about 19L, on average. It’s a young herd, most of the cows would be in their second, third and fourth lactation.

We wouldn’t be far off the 500kg of milk solids mark, which is where we want to be – so all in all, we are happy with how the herd is performing.

“Hopefully now we will be able to keep them out on grass until November. The weather is starting to break. Winter can be early on this farm sometimes, so we’ll just have to wait and see. We might have to look at having them out by day and in by night, if the weather completely breaks.” 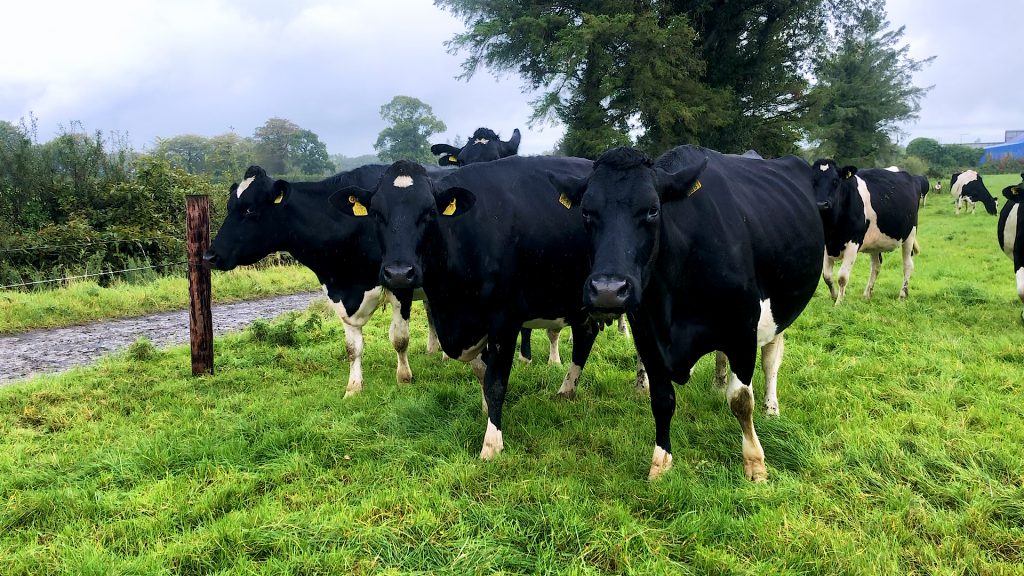 ‘Getting the milking platform right’

TJ places a huge emphasis on grass and it was something he wanted to get right before ever thinking about improving the infrastructure on the farm.

He explained: “We have a 110ac milking platform here that is solely used for the milking herd. It has all been reseeded over the last 10 years.

When I was happy that I had done everything with the land, and that we were growing enough grass, I could then focus on improving the infrastructure around the farm.

“You have to get the grass side of things right first. You can have the best of milking and housing facilities, but if you can’t grow the grass then what’s the point of having all that – that’s why we focused on that first before building a new parlour and extra housing.” 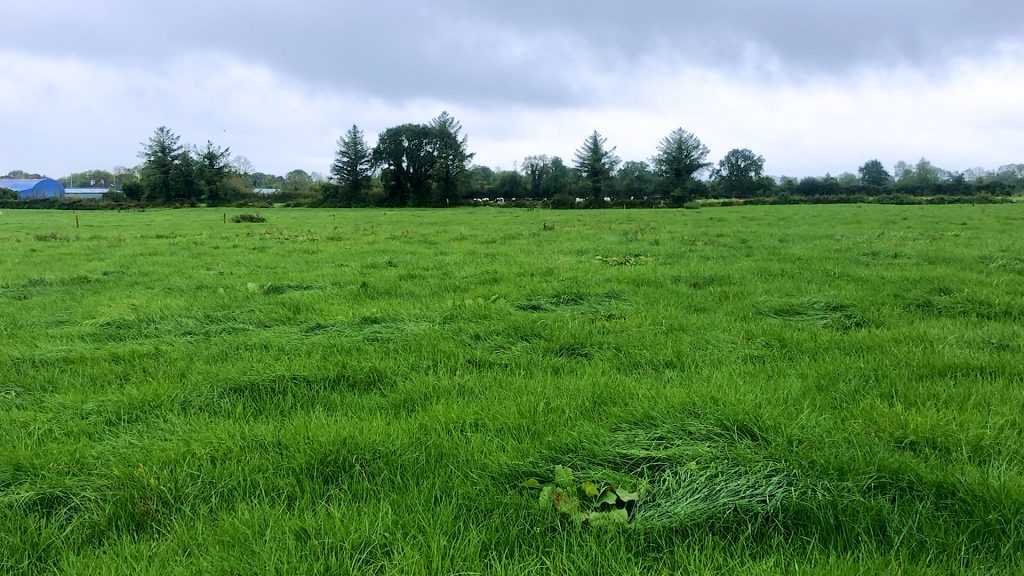 The Ryans were originally milking up to 120 cows through their old 10-unit parlour until April of this year. Like so many other expanding herds, the time it was taking to milk the cows in the old parlour was increasing.

So, to make life easier, the duo opted to build a new parlour and handling area beside the old parlour.

TJ added: “I suppose with the old parlour, between everything, you would be two-and-a-half hours milking the cows and washing up.

“Between when the first cluster goes on and when the last one come off, it’s about an hour; then, add in washing up and your talking, at most, an hour and a half – which is a massive difference in comparison to the old parlour.

When you’re in the new parlour and milking the cows, you are kept busy, but you’re gone out of it a lot quicker than before in the old 10-unit.

“It’s just a much nicer and brighter environment to work in. No matter when you went into the old parlour, you would have to turn on the light, because it was dark inside it constantly. The difference in the new parlour is unbelievable; every morning you go in during the summer, it’s lovely and bright in it.

“We have a relief milker who has been with us for a few years and he’s delighted with the new parlour.

The one thing we have seen is that our somatic cell count (SCC) has increased since we moved into the new parlour, but I think it’s just down to the change of a new parlour; it takes time for the cows to get used to it.

“It took the cows a long time to get used to the drafting system as well. I used to have to leave the pit at the start quite a bit to get the cows to move on, but over time, as the cows get used to it more, they should become more settled.”

When TJ decided to go down the route of installing a new parlour, he made contact with Aidan Kelly of Agri Design and Planning Services, who designed the new build for him.

TJ’s brother, Sean, carried out the digging work involved in the build, while DC Construction completed all the concrete work.

The frame of the shed was sourced and erected by O’Dwyer Steel. The Ryans opted to install a DeLaval 20-unit herringbone parlour, which has all the ‘bells and whistles’ associated with a modern milking parlour.

The building itself, which includes the milking parlour; drafting area; office; and bulk tank room is 43.5m long and 12.5m wide. The unit stands 5.4m high at the apex and 4.1m high to the eve gutters. The concrete walls of the shed stand 2.4m high.

The handling area – beside the parlour – is split up into: a crush; an exit race; and two pens. Slats are incorporated along the entire length of the exit race, while the rest of the area consists of a solid concrete floor surface.

The new build was carried out with the aid of the Targeted Agricultural Modernisation Scheme (TAMS). The cost of the build came to €280,000 (including VAT).

During the week, when AgriLand made the trip down to TJ, the Tipperary-based farmer was in the middle of constructing a new cubicle shed, that will provide him with 50 extra beds.

The build is progressing well and the hope is that it will be completed in the next couple of weeks – before winter housing.

Speaking about the new housing facility, TJ said: “This is hopefully going to be the last of the building. I am comfortable at 130 cows. I have no plans to increase that number, so when this new house goes up I will have plenty of housing space.

We were able to house up to 110 cows last year. However, considering we are up to 130 cows and take into account the in-calf heifers, we were getting tight for space.

“We have had to house the in-calf heifers out on an out-farm, so my plan is to bring them home. I’ll have 150 cubicles when this build is finished, so there will be no running up and down the road to the out-farm anymore, which is great, because that used to take up a lot of our time.” 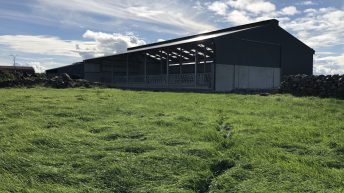