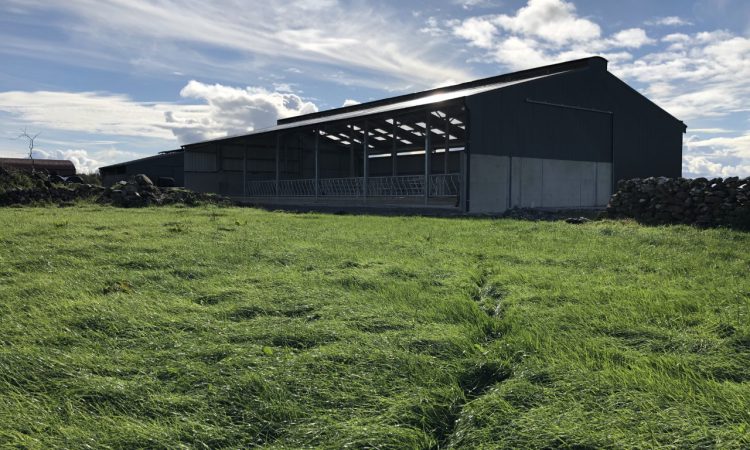 In this week’s Buildings Focus, AgriLand made the trip to Neale, just outside Ballinrobe in Co. Mayo, to speak to David O’Brien.

David has recently built a brand new six-bay slatted unit, with a lieback area and crush. The Mayo-based farmer took over the family farm from his father back in 2013.

He runs a mixed enterprise of 15 suckler cows, 35 stores and 40 ewes – as well as keeping some store lambs.

Since 2013, the farm has changed its system. David’s father kept mainly store cattle. However, David wanted to to get into cows.

The only problem that made that change difficult was the lack of housing facilities on the farm. David’s father built a two-bay, double slatted unit back in the 1990s; however, it isn’t suitable for calving down cows, so David decided that it was time for change.

Speaking to AgriLand, David said: “The housing facilities on the farm previously meant that I couldn’t really expand and, also, they weren’t suitable to calve down cows, so I needed to look at doing something.

My father would only have kept store cattle, so the shed we had to house them for the winter was fine, but I wanted to get into cows and, up until now, expanding cow numbers and managing them at calving time has been a struggle.

“The new shed should make life so much easier for me. It allows me to expand and it gives me more flexibility in what I can do.”

The new housing facility was built on a greenfield site, which is just beside the old two-bay, double-slatted shed.

A local contractor dug out the tanks, while Damien Ryan Contracts came in and took over from there and finished the build, which included: the concrete work; the frame of the shed; and all of the gates and feed barriers.

Looking at the shed in more detail, the design includes a six-bay slatted unit; with a creep area; and a crush against the back wall of the shed.

The concrete walls of the shed stand 2.4m high. The slatted tank is 26m long, 4.7m wide and 2.4m deep. Agitation points are located at either end of the tank.

The six slatted pens are 4.8m wide and 5.0m long. The three pens in the creep area are 9.6m long and 7.6m wide. Each creep pen serves two of the slatted pens. If David wanted, the creep area could be further split into two pens, or into one big pen.

The sliding doors at either end of the creep area are 6.0m wide.

Similar to many new grant-spec sheds, two features of the new unit that stand out are how airy and bright it is.

Next door to the new housing facility is the old two-bay, double-slatted unit that David’s father built back in the 1990s. The difference in airflow and the amount of light coming in through the two sheds is massive.

The old two-bay, double-slatted shed is obviously a lot smaller, but, as well as that, the roof is lower and the amount of natural daylight that can come in through the shed is minimal.

Also, when at capacity, the old shed would have been quite warm and, at times, would have been stuffy; however, with the new housing facility, David doesn’t expect to encounter this problem. 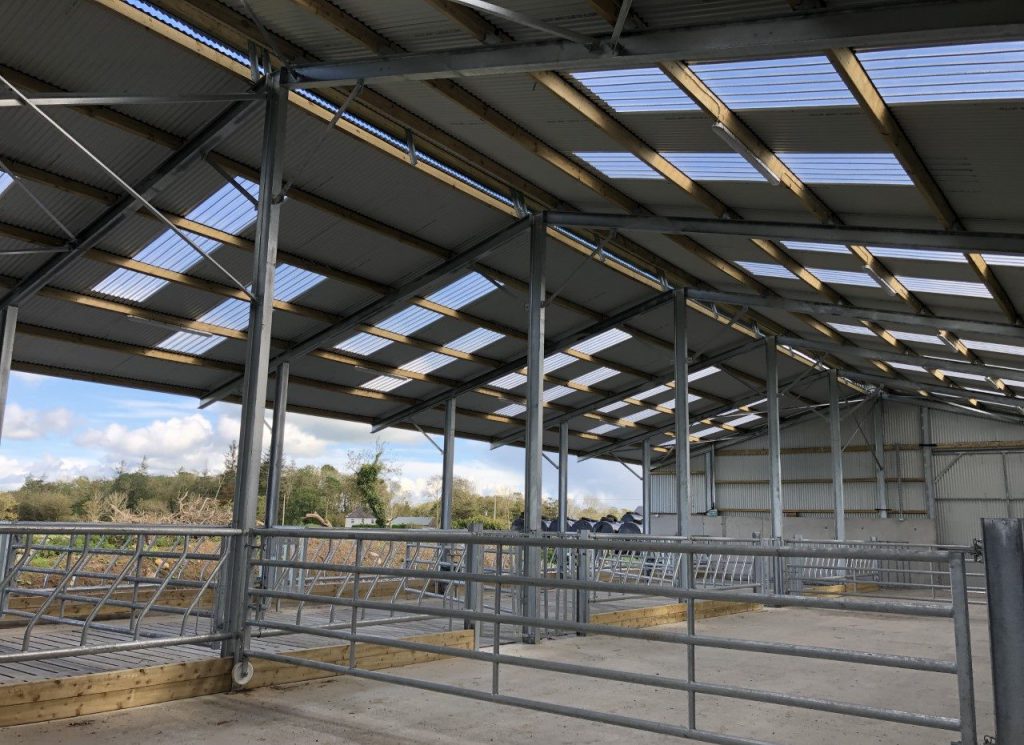 The new unit gives David options and flexibility – which was something he didn’t have before with his old housing facilities.

David added: “I needed a facility that would allow me to house my cows and calve them down, as well as having space to continue to expand the herd.

The old shed will still be used to house the stores, while the new one will be predominately used for the cows; however, if I so wish, I could keep more stores and house some of them in the new shed as well.

“It [the new shed] has given me options which I didn’t have before and its a breath of fresh air to be honest.

“I can do a whole range of jobs in the new unit. For example, I can carry out TB testing in the new unit, with the help of the crush at the back of the shed.”

David explained: “The cattle can be run around the shed in a loop for testing or if I needed to dose them, which is very handy, as it means I can do it by myself without having to get help – like I would have had to do before.

“Safety is a big thing as well. If a cow is close to calving I can take her from the slatted pen and move her into the creep area and run her up the crush if she needs assistance calving.

“It makes the job so much safer and easier to do. Then, when she calves, she has the freedom of a big pen to lie in.

“Obviously, with the help of the creep gate, the calves will be able to come and go from the slatted area to the creep area, which will be bedded with straw for them.

“Furthermore, there is a door at the back of the creep area, that leads out to a small paddock, that I can let the calves out to in spring if I want to.

I can also feed the cattle from both sides of the slatted area. There are two sliding doors at either end of the creep area, which makes it a very accessible shed for machinery.

“The options I have are fantastic. I never mentioned that I also have the option of storing straw in the creep area and, also, I could lamb my ewes in the shed as well.”

‘Finished in no time’

The new build was completed quickly. After making contact with Carroll Consultancy with regard to the design of the shed, David made contact with Damien Ryan Contracts who took over from there.

David added: “The whole process from start to finish was very smooth. It took no time to get everything done.

“Damien and the gang came in and within the space of a month they had the job done. The tanks were dug out for them already, but after that they took over and made a fine job of it.

It’s important to note that it wouldn’t have been possible really, with the tight margins involved in beef farming, to complete this build without the aid of the grant.

“I got the full grant [60%] and, to be honest, without it, it would have been a tough job to go ahead without it.

“Thankfully, I was able to avail of it and I couldn’t be happier with how it turned out.” 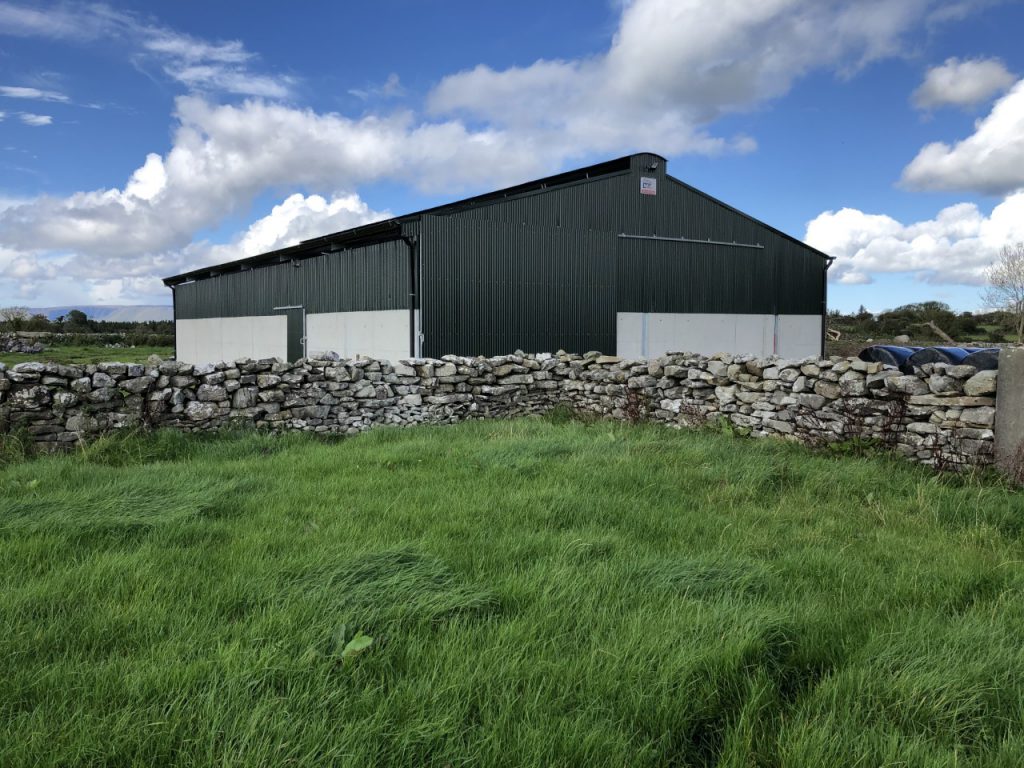 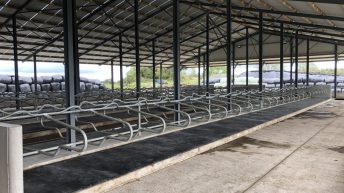 Buildings Focus: ‘Biting the bullet’ by building a 150-cubicle shed in Co. Offaly