The Basic Payment Scheme (BPS) has recorded an underspend of over €225 million in the past three years, according to the Minister for Agriculture, Food and the Marine, Michael Creed.

All applications for aid under the BPS scheme, formerly known as the Single Farm Payment, must satisfy a number of eligibility requirements before payment can be issued, Minister Creed recently said.

“In each scheme year, a number of applications for payment fail to meet these requirements and the department is therefore not in a position to make payment on these applications.

“The ceilings set by the commission are the maximum payment amount allowable within the scheme for each year.

“Where the ceiling has not been utilised in full, these amounts remain available to the member states to pay applicants who subsequently become eligible for payment,” Minister Creed said.

The maximum payment that can be granted to any one farmer under the BPS scheme (excluding the Greening Payment) in Ireland in any one scheme year is capped at €150,000, he added.

The EU regulations allow for a sliding scale of reductions above this €150,000 threshold, and Ireland implemented a 100% reduction, thus setting the cap at the lowest level allowable, the minister said in response to the parliamentary question.

Meanwhile, the Greening Payment is a top-up of the BPS; it amounts to approximately 44% of the total value of entitlements activated, Minister Creed said.

Over 90% of farmers will automatically qualify for the Greening Payment on the basis of their current farming practices.

“The remainder will have to undertake specific measures to qualify as outlined in the 2017 BPS Terms and Conditions Booklet,” he said.

The deadline for applications to the BPS scheme is set to close at midnight tonight. 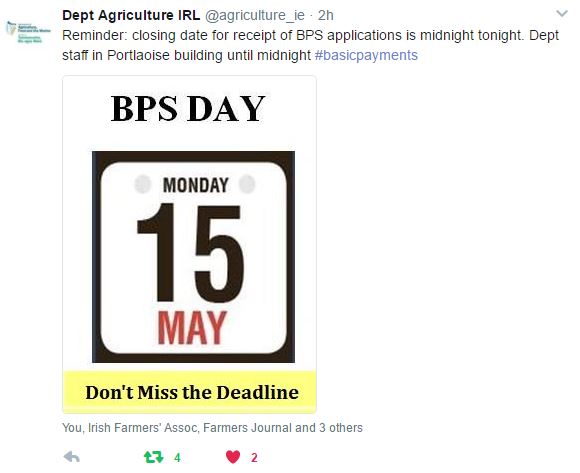 Staff are set to remain in the department building in Portlaoise right up until the deadline to help with any late applications.

The most recent update from the department showed that close to 90% of farmers had chosen to submit their applications online.

This year farmers are allowed to submit their applications online or in hard-copy format. However, it is believed that applications to the BPS scheme will have to be submitted 100% online from 2018 onwards.

Deadline looming for BPS applications, as close to 90% of farmers apply online