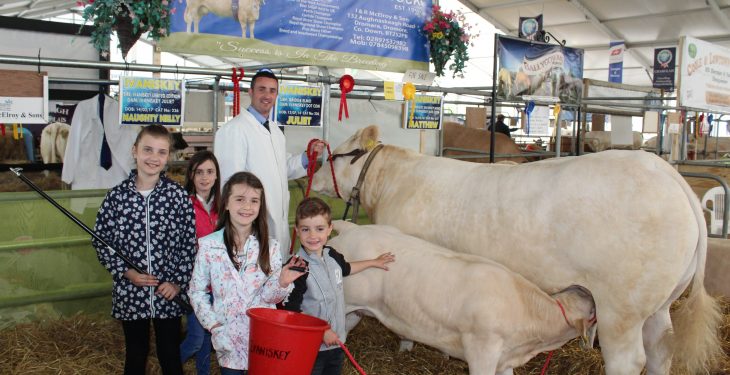 William McElroy with his nieces and nephews at Balmoral Show

The four-day Balmoral Show format has worked for Co. Down Blonde breeder William McElroy. But there is an almost equal divergence of opinion amongst cattle and sheep breeders on whether or not the Royal Ulster Agricultural Society (RUAS) should continue with the event format followed this year.

“The extra day is giving me an opportunity to spend more time making contact with a wide range of pedigree and commercial herd owners,” said McElroy.

“Showing is one thing. At the end of the day, my business is all about selling the breeding animals that are coming through within the herd.

Balmoral is a tremendous shop window for my cattle. So the extra day is a real bonus, in terms of it being a genuine networking opportunity.

There are 12 pedigree cows in McElroy’s Ivaniskey herd. He had three animals entered for this year’s Balmoral Show.

“We arrived on Monday evening. The cow was selected as the Reserve Blonde Female Champion while the bull was placed third in the Junior Male Championship.”

McElroy was elected as Chairman of the British Blonde Cattle Society in March of this year. He will serve a three-year term.

Moneymore commercial cattle breeder Robert Miller, however, believes the new four-day format puts too much stress on both animals and their owners.

“I know that the RUAS is committed to the four-day plan for another year. But the sooner we get back to the way it was the better.

Texel sheep breeder Alastair Gault agrees. He secured the Reserve Interbreed Championship at this year’s show with a ewe.

“The breed classes were judged on Wednesday; yet I had to wait until Saturday to take part in the interbreed class. That gap is far too long.”

Sheep entries were down by 5% at this year’s show. It is felt by some that the extra day may have put a number of breeders off coming to the event. 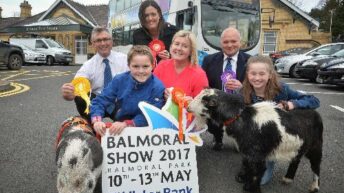