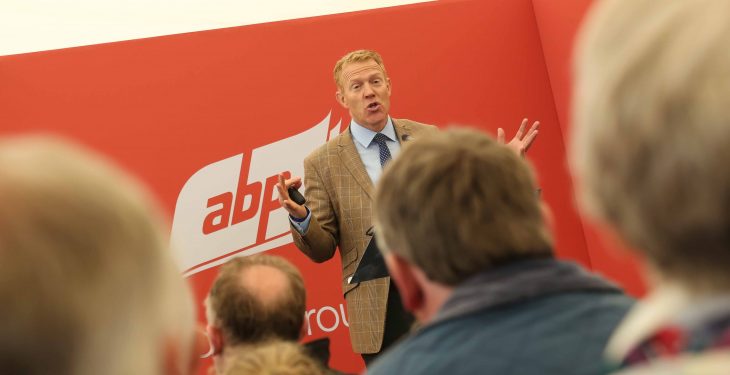 Countryfile’s Adam Henson paid a visit to this year’s Balmoral Show. He hosted a prize-giving ceremony on the ABP Food Group stand, to mark the excellence of the beef production standards achieved in Northern Ireland.

In addition to his commitment to the BBC, Henson explained that he is part of a tillage farming partnership in the Cotswolds.

The business farms 4,000ac of combinable crops. I also have a rare breed cattle operation and a flock of 450 Lleyn cross-bred ewes.

With regard to Brexit, Henson admits that the potential loss of the ‘Basic Payment’ is giving him great cause for concern.

“Given the current state of grain prices, the Basic Payment is crucial to the viability of the grain operation,” he said.

“And the same principle holds for the cattle and sheep businesses. All the mood music from Whitehall would indicate that the Basic Payment may well be ended or radically changed, once Brexit takes effect.

“If this is the case, market prices would have to improve in order to compensate farmers for the loss in the direct support they would endure.”

Henson confirmed that he will seek to diversify his farming operations as a direct response to the challenge of Brexit.

“It makes sense to increase the number of income streams generated by the business. I also trust that farming industry leaders will communicate the needs of farmers to the government as the Brexit process develops.

“There is so much more to farming than the production of food. Farmers are custodians of the countryside. This has important implications for tourism and rural communities up and down the country.

I don’t have a crystal ball. Nobody knows how Brexit will work out. But I do know that farmers are very flexible people. They will adapt their businesses, provided they get sufficient time to make this happen. I voted for the UK to remain in the European Union.

Henson is a regular visitor to Northern Ireland.

“I have filmed here regularly. Northern Ireland is a wonderful part of the world. I am very aware of just how important the beef industry is to the local economy.” 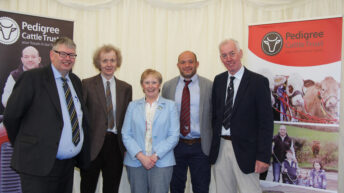