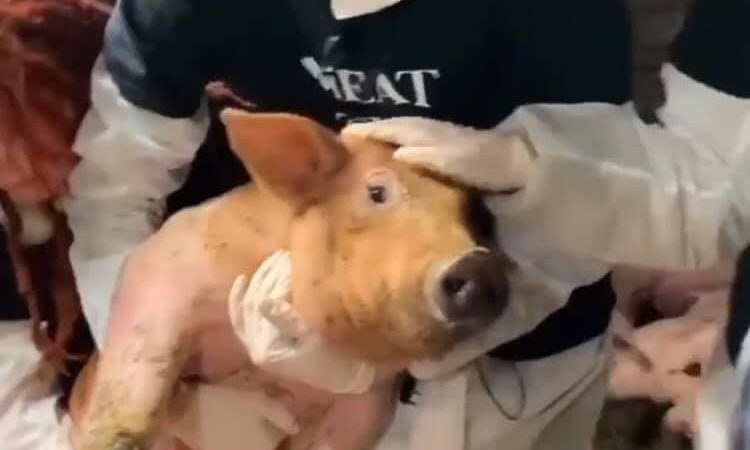 Animal rights protesters have claimed to have taken a pig from a Northern Ireland farm this morning (Tuesday, January 14).

As many as 50 protesters clad in white overalls and gloves are understood to have entered the farm buildings as part of the ‘Meat the Victims’ event early this morning.

A spokeswoman for PSNI confirmed officers had attended the scene.

“Police received a report of a protest involving a number of people at a farm in the Cloughmills area around 4:30am this morning,” she said.

Police attended and spoke with the protesters who left the property shortly before 7:00am. There were no reports of any criminal offence during the incident.

The group claimed it had “negotiated the release” of the pig from the farm in north Co. Antrim.

The Meat The Victims movement was founded in Australia but has groups in the UK, Ireland and Europe.

‘How to Steal Pigs’

It comes as Channel 4 plans to air controversial documentary ‘How to Steal Pigs and Influence People’ tonight.

UK farm groups have accused the programme which is due to air tonight of glamorising criminal activities carried out on farms by animal activists.

NPA policy services officer Lizzie Wilson has described the programme as a “disgrace” and has written to Channel 4 warning that the footage could encourage others to follow suit.

Tom Calvert, head of legal at production company Dragonfly, confirmed the programme included “incidents in which vegan activists commit illegal acts”, including a ‘Meat the Victims’ mass incursion. But he claimed these acts are “not glamorised, encouraged or condoned in any way”.

EDITOR’S NOTE: Since the date of publish, an updated PSNI statement has been issued stating enquiries into the incident are ongoing as police continue to work with partner agencies to establish if any criminal offences have occurred.
NPA PSNI Rural Crime
Loading Next Story