The latest proposals made by the UK which would see a number of customs clearance sites on both sides of the Northern Irish border have been labelled a “non-starter” by Tánaiste and Minister for Foreign Affairs Simon Coveney.

The Tánaiste was reacting to the proposals, revealed by RTÉ News last night, made by UK negotiators in recent technical discussions with EU officials in Brussels.

Taking to social media, Coveney said it is “time the EU had a serious proposal from the UK Government if a Brexit deal is to be achievable in October”.

Non-Paper = Non-Starter. Time the EU had a serious proposal from the UK Govt if a #Brexit deal is to be achievable in October. NI and IRE deserves better! 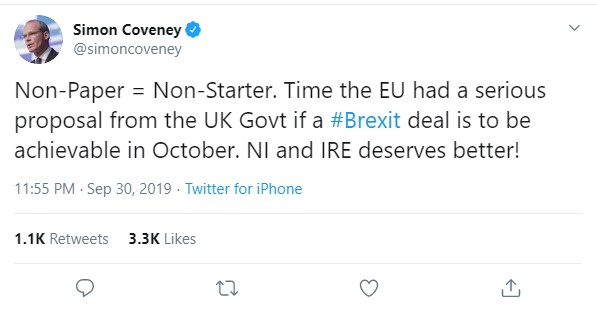 The Tánaiste added that both Northern Ireland and the Republic of Ireland deserve better.

Submitted in four “non-paper”, the proposals would apparently see custom points set up approximately five to 10 miles “back” from the border.

In addition, the proposals would have both the EU and UK create “customs clearance sites”; the UK also proposed that products moving from such sites north of the border would be monitored using GPS en route to a southern site.

Irish opposition parties have also slammed the proposals. Fianna Fáil Brexit spokesperson Lisa Chambers described the non-paper as “effectively a border with a buffer zone and is clearly not a satisfactory alternative to the backstop”.

Meanwhile, Sinn Féin leader Mary Lou McDonald said the move is not a viable proposal and “absolutely out of the question”, adding “it is a vexatious and almost menacing suggestion”.

UK proposes customs 'sites' on both sides of NI border