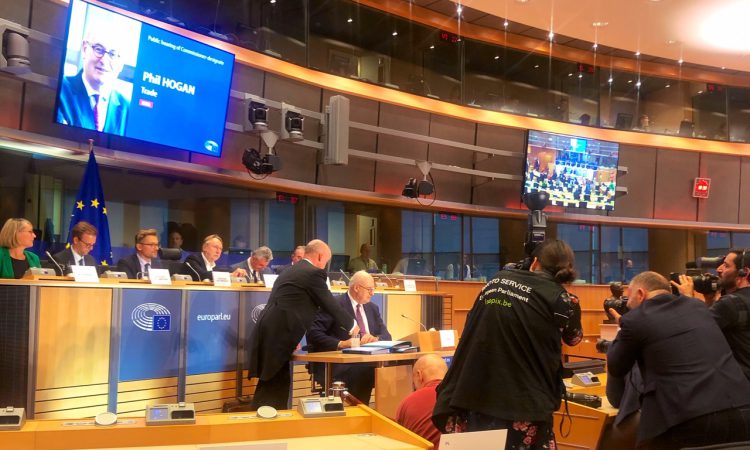 The EU Commissioner (designate) for Trade, Phil Hogan, has faced significant questioning from MEPs on his plans for the trade brief – should he be successful in his nomination for the powerful portfolio.

During his opening speech at the European Parliament this evening, Monday, September 30, the commissioner made his case for the trade brief by outlining five main priorities for trade policy under his mandate.

Addressing the commission hearing in Brussels, the Fine Gael politician made it clear that he is “no stranger” to international trade following his five-year term as EU Commissioner for Agriculture and Rural Development.

He highlighted that international trade is the “lifeblood” of the EU economy – with the export of goods and services supporting one in seven jobs across the bloc.

“I believe that EU trade policy can and must provide real opportunities for sustainable growth, for stability and predictability in an increasingly volatile world – while offering EU businesses a level playing field and protection from unfair trading practices.

But trade policy must also be able to evolve and we need to show that it is relevant and fit for purpose to address the new challenge to our security, our strategic autonomy, and our technological leadership.

“It must also reflect and promote our values in the EU and what we stand for – especially in areas like climate action, sustainable development, labour rights and women’s empowerment,” he said.

Commissioner Hogan moved to reassure those at the hearing that he will continue to build on “the transparent way” in which trade policy has been made during the period of the last parliament.

He said he would be “supportive in encouraging” the European Council to listen to the views of the parliament in progressing legislative files, and in avoiding provisional application of trade agreements before the necessary committees have had a chance to give consent.

His five main priorities for trade policy if confirmed will include:

The commissioner designate stated that trade “cannot fulfill its potential” without the stability and predictability that comes from a “rules-based multilateralism”.

“My commission will keep championing this approach and ensure that we uphold and update the rules-based global order. The international rules-based trading order, with the WTO at its core, is facing its biggest challenge to date.

The WTO is essential, but it needs to be updated.

“It offers a route to resolve trade disputes based on rules rather than the law of the jungle – this is why we need to uphold and defend it.

“If confirmed I will dare to do my utmost to prevent the collapse of the WTO dispute settlement mechanism and find a systemic solution to reform the body.”

At the same time, the Kilkenny native said he will work hard with other WTO members to reinvigorate the negotiation functions of the organisation.

“The rule book needs to be updated to address issues such as the rampant use of subsidies by China, and others, and forced technology transfers.

“In the current international context too many of our partners are on the path towards protectionism.

Europe needs to speak up for fair, open and rules-based trade.

If confirmed as Trade Commissioner he says he will show leadership, work constructively and strive for positive outcomes – but will also be strong in standing up for EU interests.

He said the EU will continue to move forward and work to reduce trade tensions, highlighting the EU Commissioner Jean Claude Junker’s meeting with US President Donald Trump in July 2018.

“I am committed to working on a positive transatlantic agenda and I will be open to the rapid resolution on trade disputes with my US counterpart.

Also Read: ‘I always seem to inherit a job when things are not going too well’ – Hogan

“We achieved this this year on the hormone-free beef quota, but to reach our objective we need to have willing partners.

“The relationship between security, technology and trade is evolving very rapidly; it is affecting our relationship with all major players and we are ready to engage with the US on these issues.”

Hogan said the EU and the US share a common understanding on the challenges posed by China’s use of subsidies and the heavy involvement of the state in its economy.

“It stands to reason that we should find ground to cooperate on such strategic questions.

“Our relationship with China is important and vital; it remains a source of wealth and jobs on both sides. Our companies need to be able to compete with China – though on a level playing field – both in China and within the EU.

We have to stand firm in defending our interests and values and I’m well aware of the concerns of this parliament in this regard.

“Our approach to China should entail re-balancing our trade relationship and addressing unfair trading practice. I will not shy away from using our trade defence instruments to this end and our relationship should be based on effective reciprocity in access to markets and opportunities for businesses and investors,” he said.

With the UK scheduled to leave the EU in 31 days’ time, the incumbent commissioner highlighted that it “remains impossible” to predict the final outcome.

“The commission has prepared exhaustively for a no-deal Brexit,” he said.

Pointing to the EU’s trade agreements with Canada, Japan, Vietnam and most recently Mercosur, the commissioner designate said these agreements demonstrate the EU’s ability to leverage internal market to open markets abroad and to improve social and environmental practice in third countries.

“Our trading partners must respect the commitment they have made in all chapters – it is essential that we step up our efforts to implement and enforce existing agreements.

The appointment of a chief trade enforcement officer will create a focal point for this work and I will ask him or her to work closely with you in taking our enforcement agenda forward.

With more than 80% of EU businesses involved in international trade driven by small and medium-sized enterprises, the commissioner said the EU must stand up against protectionism where it occurs.

“We must promote reciprocal trading agreements and fair competition by leveling the playing field both internally and externally.

“We must also strengthen our own tool box, including rules that allow us to react to illegal discriminatory trade measures by third countries where recourse under the WTO is not available.

The sustainable development chapters in each of our agreements with their binding commitment on labour and the environment are so important – to pursue these goals I will be ready to make full use of the different instruments at our disposal through trade performance, bilateral trade agreements and through action at multilateral level.

“Europe needs to be the global champion of fair, substantial and rules-based trade.

“With your help I believe we can strengthen that leadership role and we can deliver results that show the European Union at its best,” concluded the commissioner before the floor was opened to questions posed by MEPs. 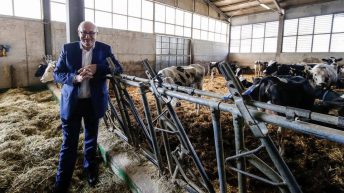