The recent beef protests continue to have a significant impact on the sheep trade, with the demand easing for factory-fit lambs.

The high prices of between €100/head and €108/head for factory-fit lambs in recent weeks are becoming a distant memory.

Furthermore, mart managers are reporting prices for these butcher lambs of between €90/head and €97/head.

However, the store lamb trade can offer some optimism for farmers, with prices ranging from €50/head for lighter lambs up to €85/head for heavier types.

The ewe lamb and hogget trade continues to thrive, with mart managers reporting a strong demand for these lots.

There was a large entry of sheep on offer at last week’s sale at Roscommon Mart, according to the mart manager, Maura Quigley.

There was a steady trade for factory-fit lambs, with prices fetching from €100/head for lambs weighing 51.2kg.

There were plenty of good-quality ewe lambs on offer, with a top price of €135/head for lambs weighing 58.7kg.

There was a similar trade for cast ewes, with prices ranging from €44/head up to €110/head.

Tuam Mart held its weekly sheep sale on Tuesday last, September 24. There was a steady trade across all the sheep classes, according to the mart manager, Marian Devane.

There was an active trade for cast ewes, with a top price of €112/head achieved. Moreover, ewe lambs made up to €91/head.

Furthermore, hoggets made up to €190/head, with breeding ewes achieving a top price of €160/head.

A slightly smaller sale of sheep were present at Dowra Mart, Co. Leitrim.

However, there were a large number of store lambs on offer and they were met with an improved trade, with plenty of farmers in the yard to buy stores, according to the mart manager, Patsy Smyth. 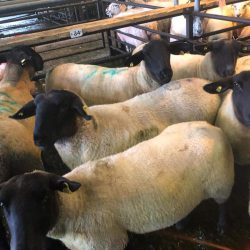 This pen of seven Suffolk ewes sold for €93.50/head 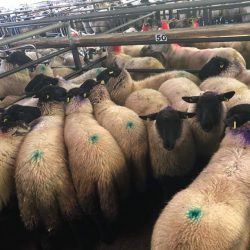 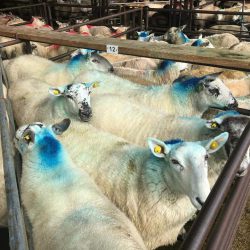 This pen of six hogget ewes sold for €185/head

There was a good entry of sheep on offer at Raphoe Mart on Monday last, September 23.

There was a steady trade throughout all the sheep classes, according to the mart manager, Anne Harkin.

There was a large entry of 4,200 sheep on offer at Carnew Mart’s weekly sheep sale on Thursday last, September 26.

Butcher and factory lambs were easier by €1/head, with a strong demand for store lambs, according to the mart manager, David Quinn.

Furthermore, cull ewes and breeding ewes met an excellent trade, with a full clearance of all stock.

Some 3,864 sheep were on offer at Blessington Mart’s weekly sheep sale on Tuesday last, September 24.

There was a very good trade for all types of ewe lambs and breeding ewes, according to the mart manager John Doyle.

However, prices for butcher and factory-fit lambs were back slightly.

Have you enough space to house your ewes for the breeding season?