Trade focus: Back to the future with the Batrake 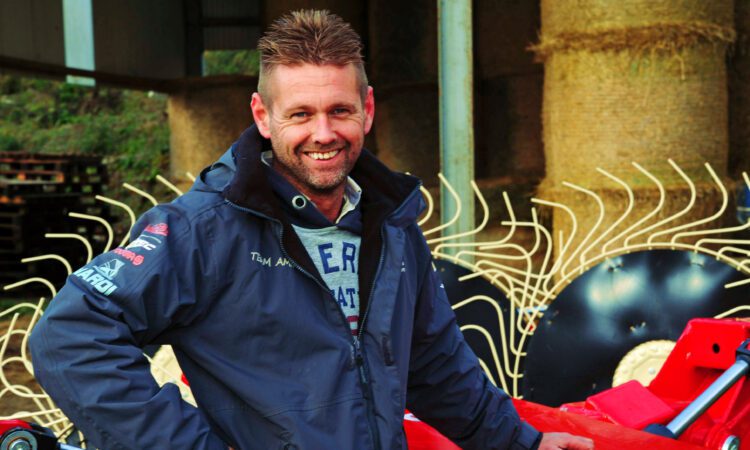 Over the past year there has been one farm implement in particular that has drawn a good deal of interest at shows around Ireland.

The machine in question is the Batrake – an Italian update on the finger-wheel rake principle which is now being imported into Ireland by AMIA.

Quite why this type of machine faded from popularity is something of a mystery, according to Alan Gillick (pictured above), who has been representing AMIA in Ireland from his Wicklow base for a year now. 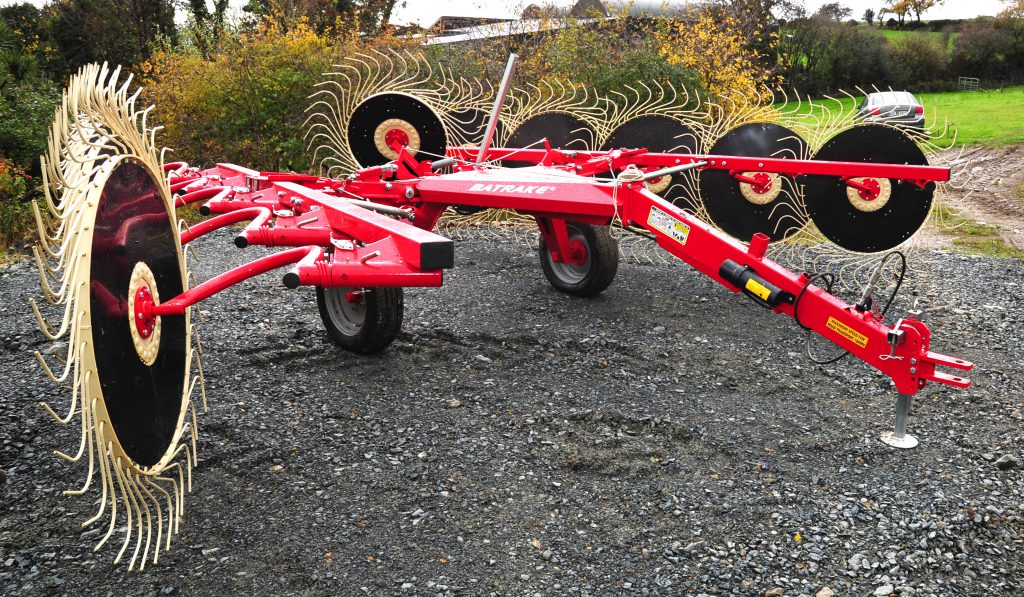 “What the Batrake is not is the Lely Acrobat,” he noted. “Many farmers had the Lely machine and didn’t really understand how it worked; so, when powered tedders and rakes arrived, they tended to switch to those instead.” 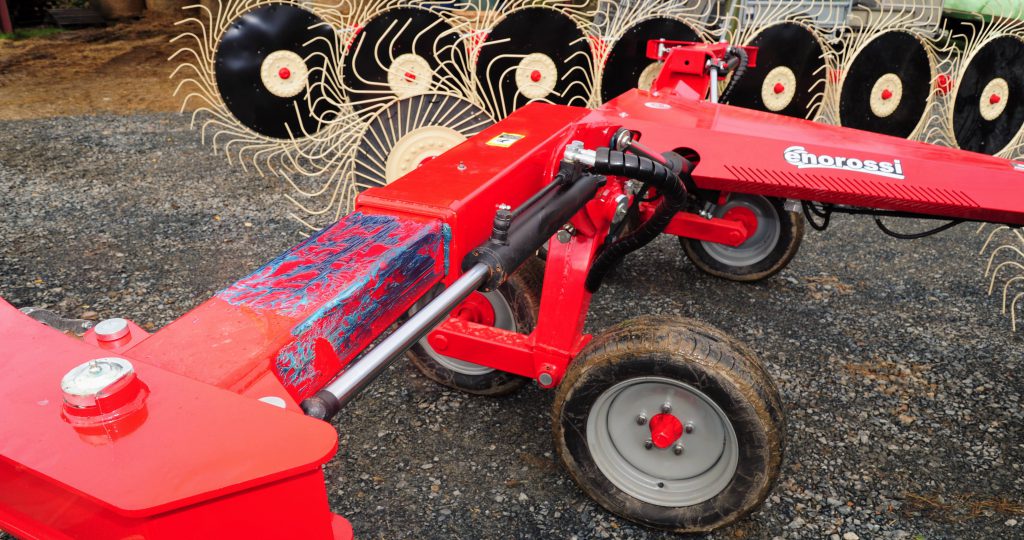 It might seem rather optimistic of AMIA to promote an implement that many would think has had its day. Alan, however, has good reason to disagree.

“I’ve sold around 30 machines in my first year, and most of those were V-rakes, including one that has covered 4,500ac in its first season.”

The chief advantage of the V-rake is the low power requirement. Alan claims that 25hp would be the minimum needed, while 40hp is quite sufficient to work a 24ft Batrake’s full width.

There is also, he notes, a more subtle benefit in the way that it operates.

The tines on a V-rake lift and flick the grass, while those of a powered rake just kick everything into the swath.

It is this combined action that can help reduce contamination of the baled crop by stones and dung, he suggests.

The price is another important factor; a Batrake will cost around half that of a powered rake of equivalent working width – although the price differential is not so great with the larger machines.

Enorossi, which makes the V-rake, is just one of the Italian manufacturers that AMIA holds the UK and Irish agency for.

It was the first manufacturer the company represented in the UK eight years ago and both have grown together since.

“Enorossi just keeps things as simple as possible, and that goes for all its machinery,” noted Alan. The complete range includes diet feeders, disc mowers and even powered tedders and rakes. 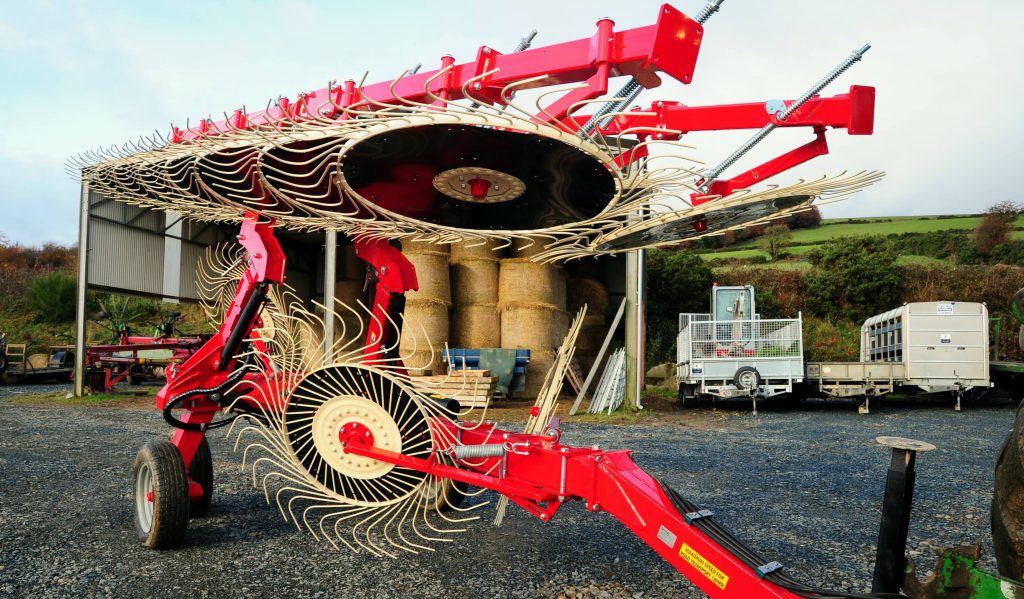 It was a purchase of a Batrake for his own use in 2017 that introduced Alan to the UK importers.

He lives on the family farm near Aughrim and purchased the rake to help with the silage and hay, much of which he sells on.

In addition to the farm, he has been involved in contracting over the years; an experience which is invaluable when talking to customers, he believes. 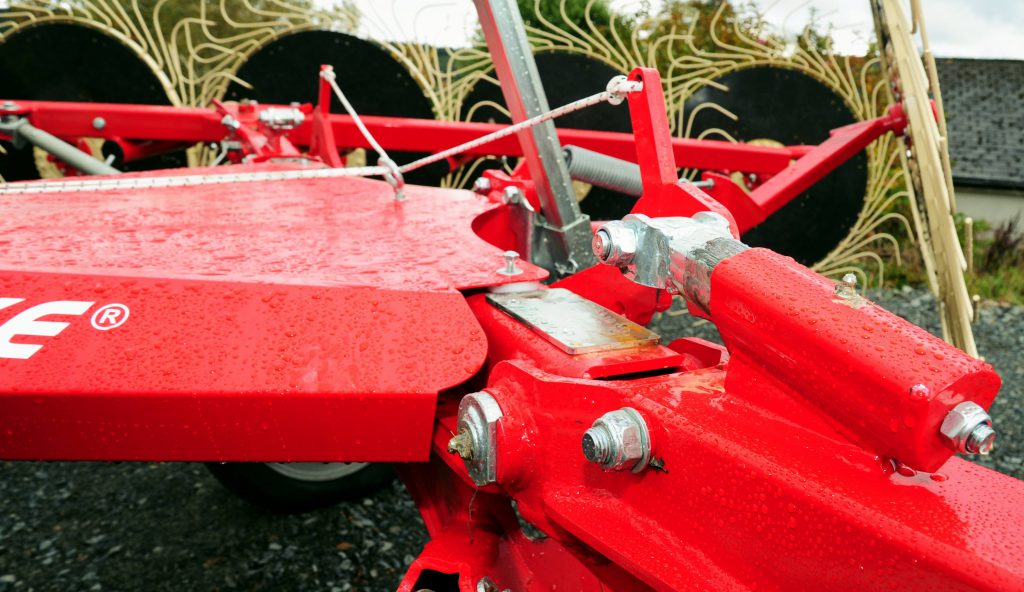 After a summer’s work with the new rake, he got together with AMIA and it agreed that he should act as the Irish importer and distributor for the 14 manufacturers that the Devon-based firm presently deals with.

If Enorossi keeps to a budget-friendly price through simplicity, another brand AMIA sells is very much a premium product.

Valentini is a manufacturer of mainly soil-engaging implements for both the construction and agricultural industries. It has an interesting approach to selling farm equipment.

Valentini will not allow a machine to be sold unless the customer has a tractor of the correct power to use it with.

The company insists on this policy to ensure its machines are used as they are designed to be.

“Too little power will not produce the efficiency and work-rate, while too much can damage the drive-train.”

Alan expects Enorossi and Valentini to be the big sellers for 2019; yet they represent just a fraction of the range he is able to supply.

The figure for the total number of machines available – with all their variations included – he estimates to be well above 3,000; although many of these will be of no interest to farmers in Ireland.

One series of products that may well find a market here are those made by Tube Line of Canada. The company specialises in bale handling machinery, including accumulators and matching grabs for small square bales.

Despite the predominance of larger balers, Alan feels that there is still a niche market for the smaller bales that is not likely to disappear any time soon. 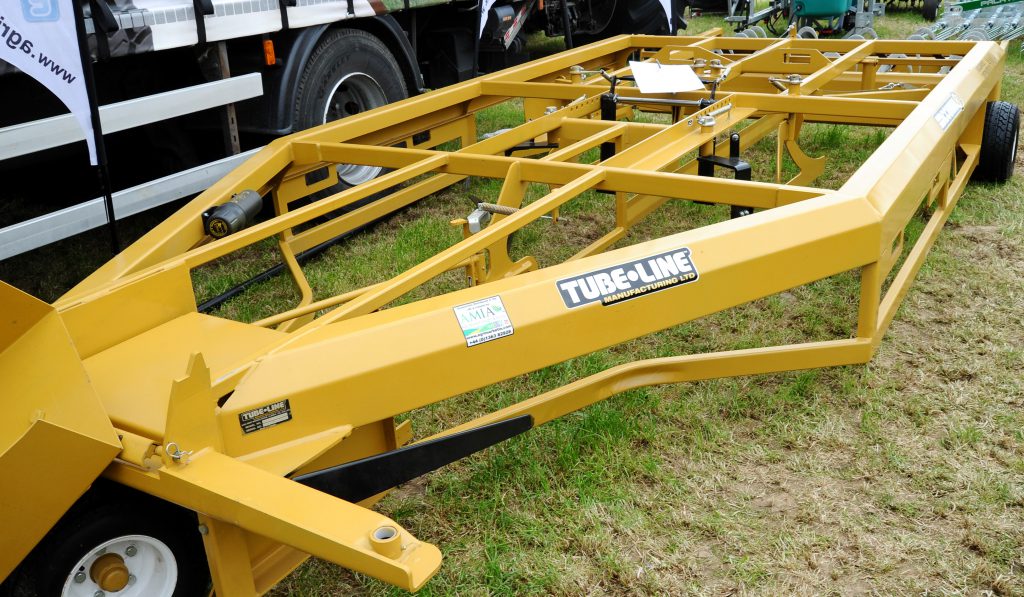 AMIA – which stands for Agricultural Market Insight and Access – is still busy looking for new manufacturers to represent in the UK; and by extension, Ireland too. 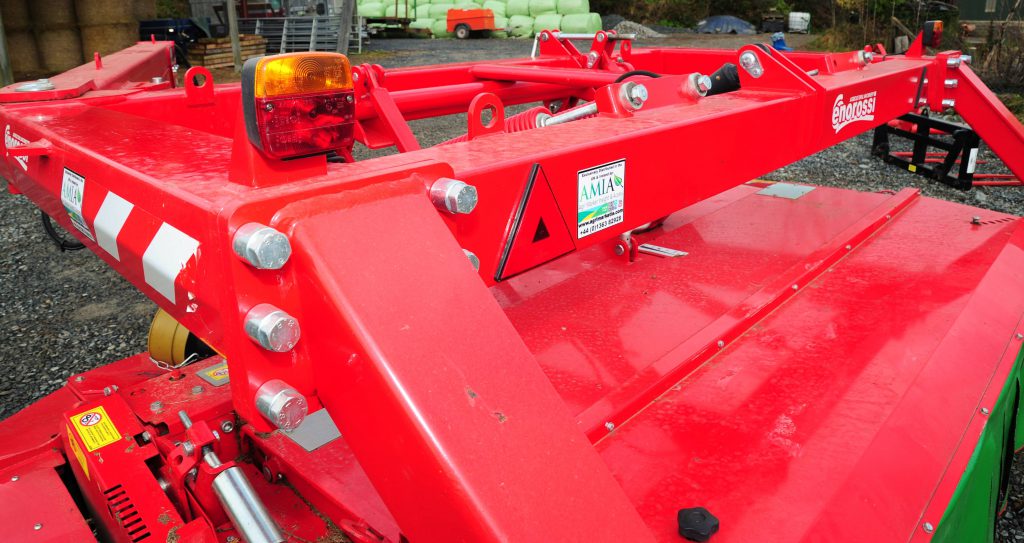 Within Ireland Alan is hugely optimistic about the prospects for the range of machines he is now able to offer. He notes that the stock he has ordered for the 2019 season is a big step up from that which he sold this year.

He is also is hoping to appoint a small number of dealerships in the west of Ireland over the winter. 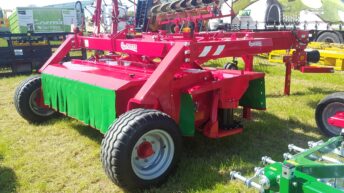 Mystery mower at Grass & Muck: Can the Italians do it better?