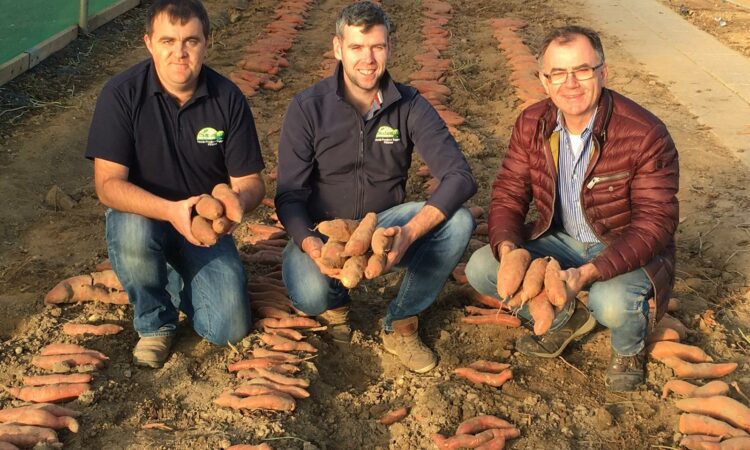 The potato industry in Ireland is a volatile sector, with small increases in potato consumption. O’Shea Farms is one of Ireland’s largest suppliers of the product in the country. The family run business, which has evolved and changed many times over the years, is now venturing into sweet potatoes – through local collaboration – to keep up with consumer trends.

While the project is in the early stages, the long-term plan is to plant sweet potato crops under glass, after early-season potatoes.

Tom Murray – agronomist with O’Shea farms – showed AgriLand the company’s first sweet potato crop in Kildalton during harvesting this November and told us about plans for the future with European crops. 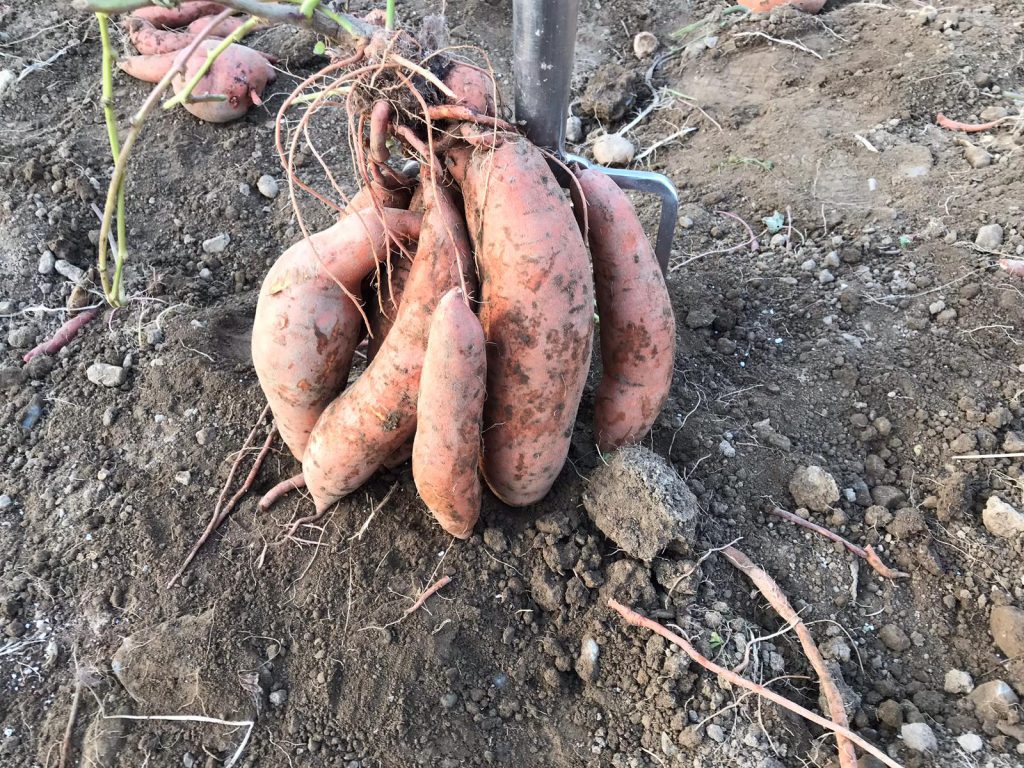 Sweet potatoes are a tropical crop, which need air temperatures in the mid-to-high 20s and soil temperatures over 20º to prosper.

Interestingly, the root vegetable is no relation to the traditional potato family. Sweet potatoes actually belong to the same family as bindweed – the morning glory family – and similarities in appearance can be seen in the images below.

Currently, the majority of sweet potatoes in Ireland come from the USA. However, Tom explained that importing from the US causes problems with logistics, costs, seasonality and shipping miles.

Locally producing these crops can reduce these problems and can also be better from a bio-security point of view, as it reduces the risk of bringing in exotic pests and diseases with this produce.

In order to ensure continuity of supply, reduce food miles and to be able to trace the produce, O’Shea farms decided to see could it produce its own sweet potatoes by taking advantage of existing leading European knowledge available from Beotanics – a local agri-tech company based in Stoneyford, Co. Kilkenny.

This year, O’Shea’s joined up with Beotanics to instigate a trial at Teagasc Kildalton, growing sweet potato crops in both a glass house and a polytunnel.

Beotanics is the first company to bring successful commercial agronomy of the sweet potato to north and north-west Europe. The company allowed for farm-scale sweet potato production in Europe and is the sole licensee of Louisiana State University genetics in EMEA.

Beotanics also has a 50% share in Nativaland. This company provides sweet potato plants and roots throughout Europe and the middle-east. O’Shea’s currently imports sweet potatoes from Nativaland.

“We were approached by Pat Fitzgerald from Beotanics, based in Stoneyford, Co. Kilkenny, to see if we had interest in the crop. Since 2006, Pat has invested in research on sweet potato agronomy.

Consumption has grown more than tenfold in the intervening years.

“Beotanics and Nativaland in Portugal have brought European sweet potato production to a new level. For the first time in history, the sweet potato has become a viable crop through the introduction of the company’s new varieties to the Netherlands, Belgium, Germany and other north European countries.

“It would have been a pity if two local companies could not have combined to make some opportunity of our mutual skills, knowledge, market access and resources.”

Growing the first commercial crop of sweet potatoes in the country

Since 2009, Pat has been carrying out sweet potato trials in Ireland and was convinced that the crop could be grown successfully under glass to fill a gap in the Irish market. O’Shea’s kept track of Pat’s blogs and trial results and became convinced that it was worth a try.

O’Shea’s is the first client of Beotanics to successfully grow sweet potatoes in this country on any significant level, and so, it grew a small amount on a trial basis for the first year. It did this as part of a joint venture with Teagasc Kildalton and Beotanics.

“We wanted to learn a bit more about how to grow sweet potatoes and the crop husbandry. Obviously, they’re a tropical crop, so we couldn’t grow them outside. We’re lucky enough to have Kildalton here with such good facilities and staff.”

O’Shea’s is currently trailing many different varieties. Bellvue and Orleans are promising varieties. They have a good skin finish and were the best yielding varieties this year.

Varieties differ in skin and flesh colour, as well as texture and taste. Pat is convinced that further improvements in genetics are near and that sweet potatoes offer many opportunities for diversification.

Purple varieties are packed with antioxidants. Purple sweet potatoes are known as a super food; it’s a good one for chefs to come up with some colour.

The crop was planted on May 17 and was grown organically.

“We grew them organically. We did need to irrigate the crop and we needed a lot of irrigation this summer, but reducing the level of irrigation towards the middle-to-end of the season is a key factor in successful production.

“They’ll survive on a lot less water than a potato crop would and are happy at 50% of the field capacity, once the canopy has been established. The key period for watering sweet potatoes is the first 45 days.

They do grow quite deep, so if the soil is very loose it will develop a long root, which will just keep growing down and this makes the crop less attractive for the market.

“Similar to a potato, if conditions are too good and they have enough fertility, they will just keep growing a canopy and they’ll put nothing back down into the tuberous root, until such a time that the soil is depleted.

“That’s what we found here in the polytunnel; once the canopy got hungry, it put everything back down into the tuberous roots.

They’re not related to the potato at all. They’re a completely different family. They’re just a tuberous root and that’s the secret; they are a root in physiological behaviour and grow in similar conditions to potatoes.

“We had drills in the tunnels and beds in the glasshouse and we covered them in plastic. This kept heat in and it kept weeds to a minimum; any weeds that came up were hand weeded.”

Ideally, temperatures need to be around 25-30°. Tom explained that, like potatoes, they’ll start to shut down when they get too warm. One pest did attack the plants, but it was controlled.

The biggest problem here was red spider – a glasshouse pest. We controlled that biologically so we didn’t use any pesticides at all.

Tom was very happy that there was no disease in the crop.

“It’s actually quite a nice crop to grow. Of course the planting material was basic and it was so clean, we would be very disappointed if we did see any disease or virus in the crop.”

The crop was dug out manually at the end of October and during the early days of November. When grown on a large scale, sweet potatoes are dug using a chain digger.

We had an average yield of 2.8kg/plant, which is 100t/ha. This is far beyond typical yields in normal agronomy in southern Europe.

Tom added that O’Shea’s didn’t grade the crop this year. If the crop was being commercially grown it would have to be graded into three different categories.

Once dug, the sweet potatoes were cured.

Sweet potatoes are cured for seven days at 29° and 85-90% humidity with proper ventilation to clear carbon dioxide (CO2). A sugar test is carried out on the crop.

“When they’re fresh out of the ground, and not fully mature, if you cut one open, latex sometimes oozes from them.

“By curing them, the starch turns into sugars and they become sweet. Curing is important to stabilise skin set and seal the wounds of harvest. This prolongs storage quality. Final long-term storage is at 13° and 85% humidity.

Moving out to growers

Continuing, he said: “Next year, we want to replicate the trials again. We’ve learned a lot this year in terms of weed control and pest control.

“Sweet potatoes would be a very good crop to put in after an early-season crop of potatoes in a polytunnel or a glass house, because our early-season potatoes will be harvested by May.

They’re not related, so pests or diseases won’t carry over. We want to utilise those facilities as much as we can and get in a crop of sweet potatoes straight away after that crop of early-season potatoes.

“We want to do it ourselves, with local support from Beotanics, and learn from our mistakes. As a crop it is relatively new to Ireland, so there’s no disease or pest issues because they haven’t built up any resistance.

“We are lucky to have glass available through Kildalton. The fact that the sweet potatoes are virus free and it’s basic planting material from Beotanics that is being used is an advantage, as there are no issues with pests and diseases entering polytunnels and infecting successive crops.”

Sweet potatoes have been categorised as a super food and are very much on trend.

“The biggest nutritional advantage of a sweet potato is that they have 1,000 times more vitamin A than a traditional potato.

“There’s more anti-oxidants and a health advantage. It’s a super food and it’s something different. Sweet potatoes can also be used in juices, smoothies and eaten raw. They’re very good for anyone on a sports diet. They have a high digestibility and a really good source of carbohydrate.

“A lot of restaurants are looking at different food and more trendy types of food. There’s a lot more sweet potato chips coming into the market. We’re working with Meadow Fresh in Waterford, which produces sweet potato soup and hand-cut chips.

“The biggest advantage that we can see at the minute is that we don’t know what’s going to happen to the American or European supply in the next 10 years.

“However, Irish and European consumers are generally looking for more and more locally supplied and traceable food where possible.

“We are investing in curing rooms, fridges, washing, packing and distribution facilities for sweet potatoes. O’Shea’s will become the hub for the importation of sweet potatoes through collaboration with Beotanics and Nativaland from Europe.

“So, if we have a link with the European market and grow some specialist types – not generally available locally – we will have less food miles, nutrient and flavour diversity, as well as continuity of supply from Europe. We will also have a better quality and fresher product to supply the Irish consumer with.” 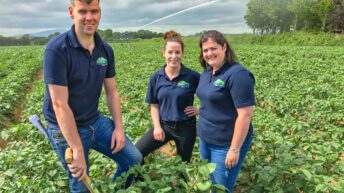 Tillage focus: 28,000t of potatoes from a family farm in Co. Kilkenny 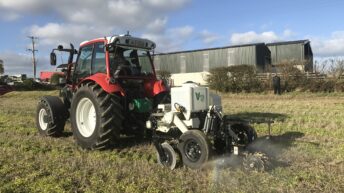 Tillage focus: Measuring pH on the go…little changes can have a big impact