Tillage focus: 28,000t of potatoes from a family farm in Co. Kilkenny

Thomas Murray, Anne Dunphy and Elaine Kenny keeping out of the line of the irrigator

Over the past 45 years, O’Shea Farms (known especially for potatoes) has progressed from a family partnership of four brothers – Dick, John, Séamus and Joe O’Shea – to a business with a turnover of €60 million per year.

The company processes 28,000t of potatoes each year at its base in Piltown, Co. Kilkenny. Iverk Produce, a sister company, distributes 90% of the potatoes and vegetables produced to Aldi. O’Shea Farms is also a sole supplier of carrots to SuperValu.

Iverk Produce was formed in the 1980s. Fyffes (Total Produce) then came on board and Iverk Produce became a major distributor of fruit and vegetables to supermarkets across the country.

The company now supplies anything from a pineapple from Costa Rica to a Piltown-grown potato; if a chef wants it, Iverk Produce has it. 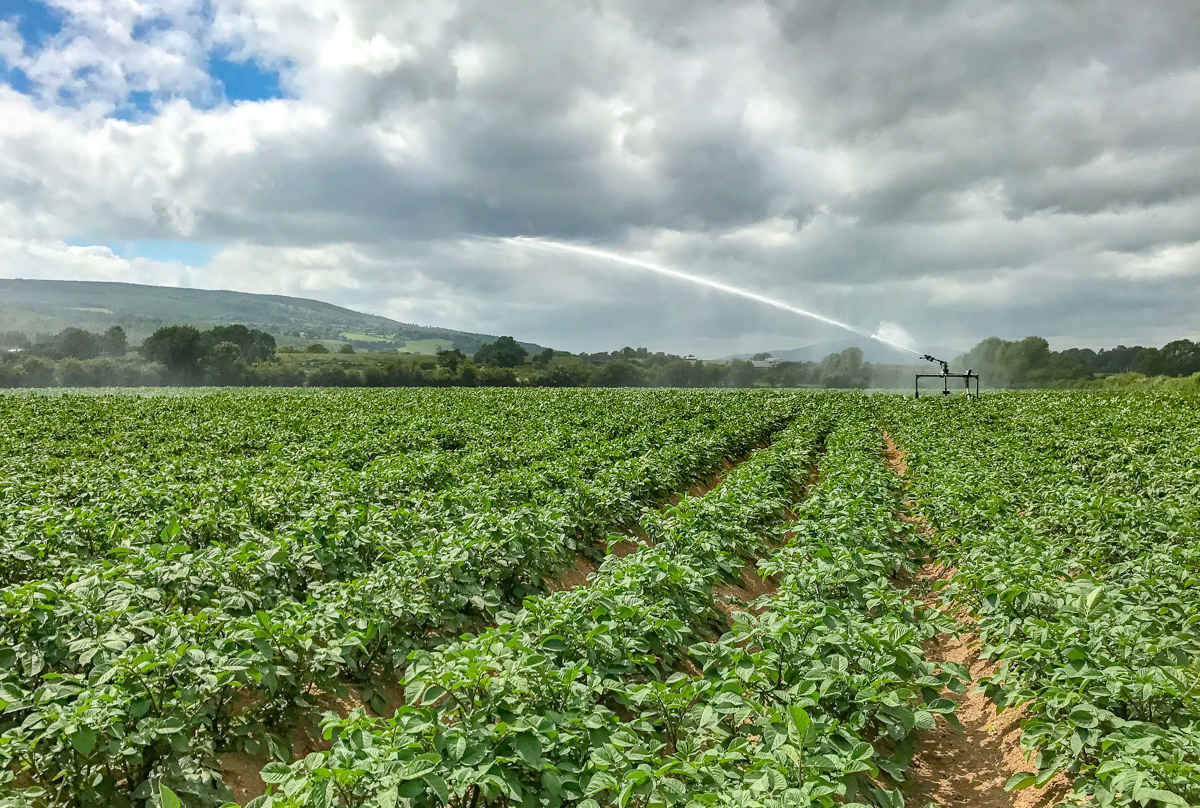 Needless to say it’s a big operation and AgriLand was lucky enough to get a glimpse into this monster business on a recent Agricultural Science Association (ASA) tour, sponsored by Glanbia and Total Produce. 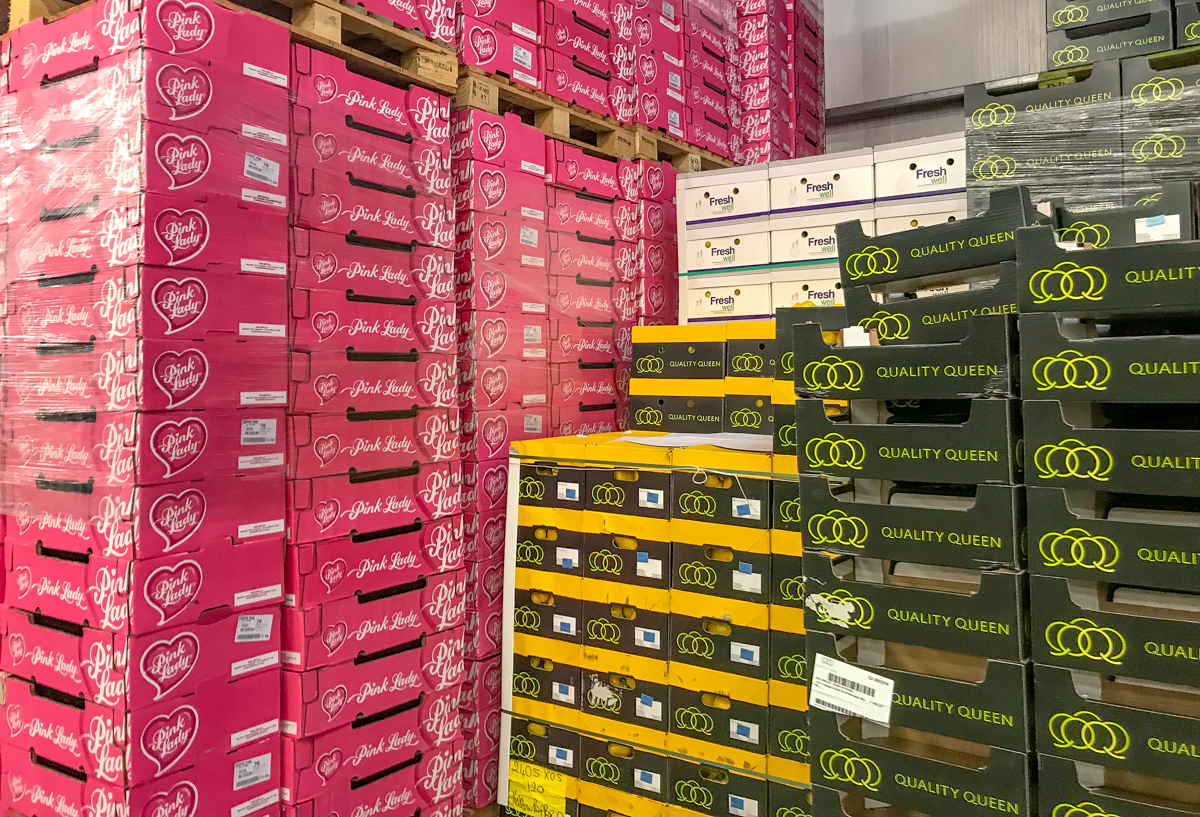 Over the years, the O’Shea brothers made big decisions in order to increase productivity and add value to their products.

One of these changes was the decision to cut cereal acreage – from a peak of 2,860ac – in order to grow more profitable crops.

Cereal acreage now stands at 1,100ac and is mainly used for rotation purposes with potatoes and carrots. The original dairy farm remains and 280 cows graze along the banks of the River Suir.

TJ and James O’Shea are the directors today, having taken over in 2015. TJ runs the field operations, while James runs the distribution and deals with supermarkets; both ensure a high standard of quality across all aspects of the business.

Quality was the standout topic from the day and there wasn’t a member of staff that didn’t mention it. No sub-standard product travels to a supermarket and everything that travels is fully traceable.

O’Shea Farms can tell you the field husbandry data, the harvest date, the temperature the produce was stored at and much more.

Every detail is recorded; before any batch of potatoes is allowed into production, it is tasted by John O’Shea. If it passes his standards, it enters the line. 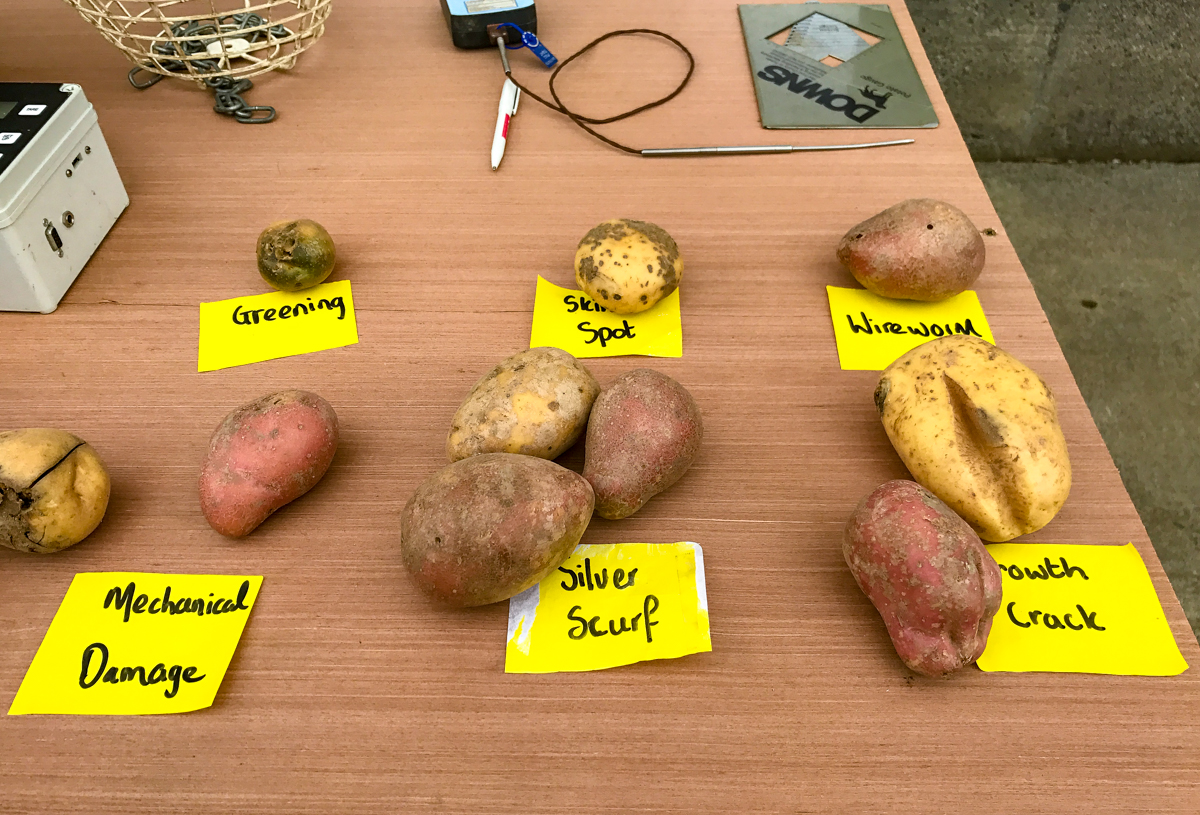 In the potato fields

Thomas Murray is the agronomist at O’Shea Farms. He has a busy job managing crops on the company’s farm and for approximately 35 other potato growers who supply O’Shea Farms and Iverk Produce. In fact, he is so busy, he sometimes uses a drone to walk the crops.

Thomas described the season so far in the potato fields. The first potatoes were planted on May 5, which is late. O’Shea Farms work on a five-to-six year rotation, which includes: cereals; grass; potatoes; and carrots. 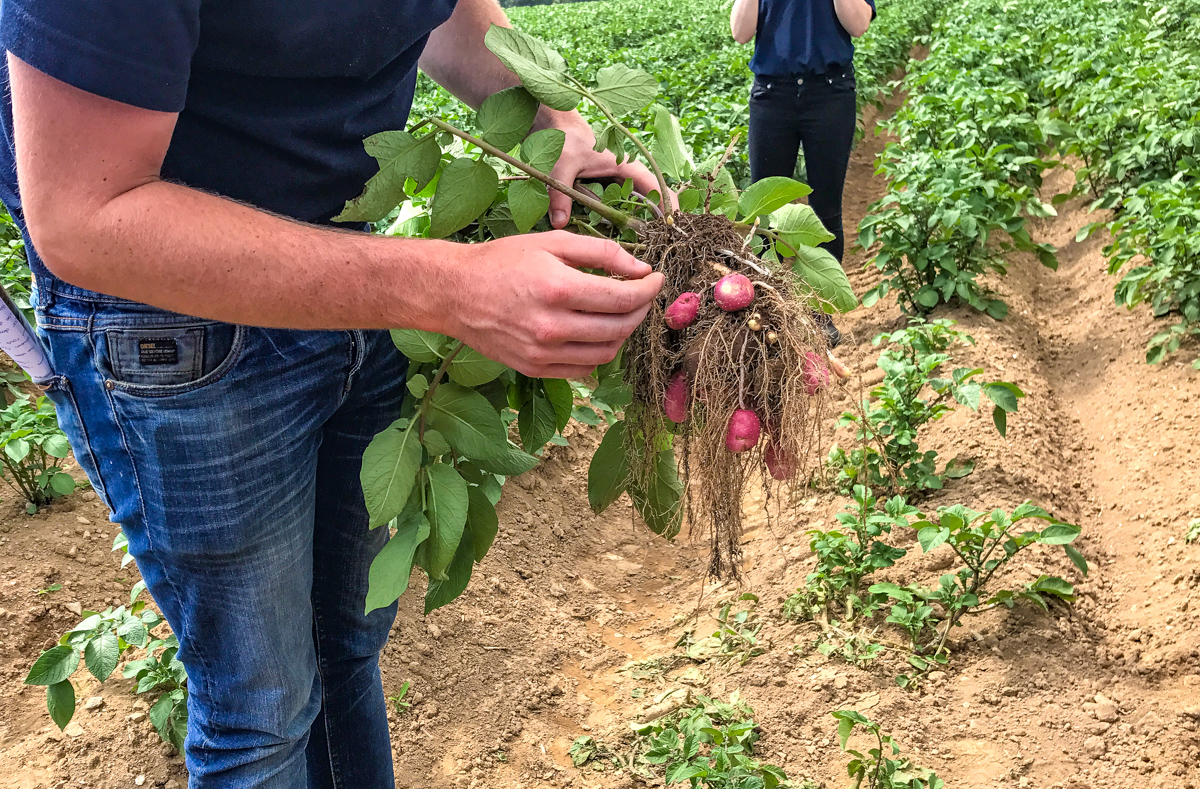 O’Shea Farms gets its own fertiliser blended by Gouldings and this is broadcast before sowing.

“We use all certified seed; there’s no home-saved seed and it’s all sprouted. Sprouting moves us on about two weeks earlier once we’ve it planted in the ground. It is expensive using certified seed every year, but it more than compensates with the quality that we achieve.”

Thomas expects the crop sown on May 5 to be ready by mid-August or early-September.

This year was a year that we couldn’t rush. We waited as long as we could for the ground to dry out before we worked it.

“If we worked it earlier, the drills would become slumped and compact; that eliminates aeration in the soil and the amount of moisture that we can get down into the soil through irrigation,” Thomas said.

Scab is the main reason for irrigation and quality suffers if this creeps into the crop. Irrigation is costly. O’Shea Farms runs 2km of pipe under roads to reach a water source.

We’re irrigating away. This field has got three runs of 15mm in the past two weeks. We’re irrigating to minimise the scab risk. This crop hasn’t received any significant amount of rain since it was planted. 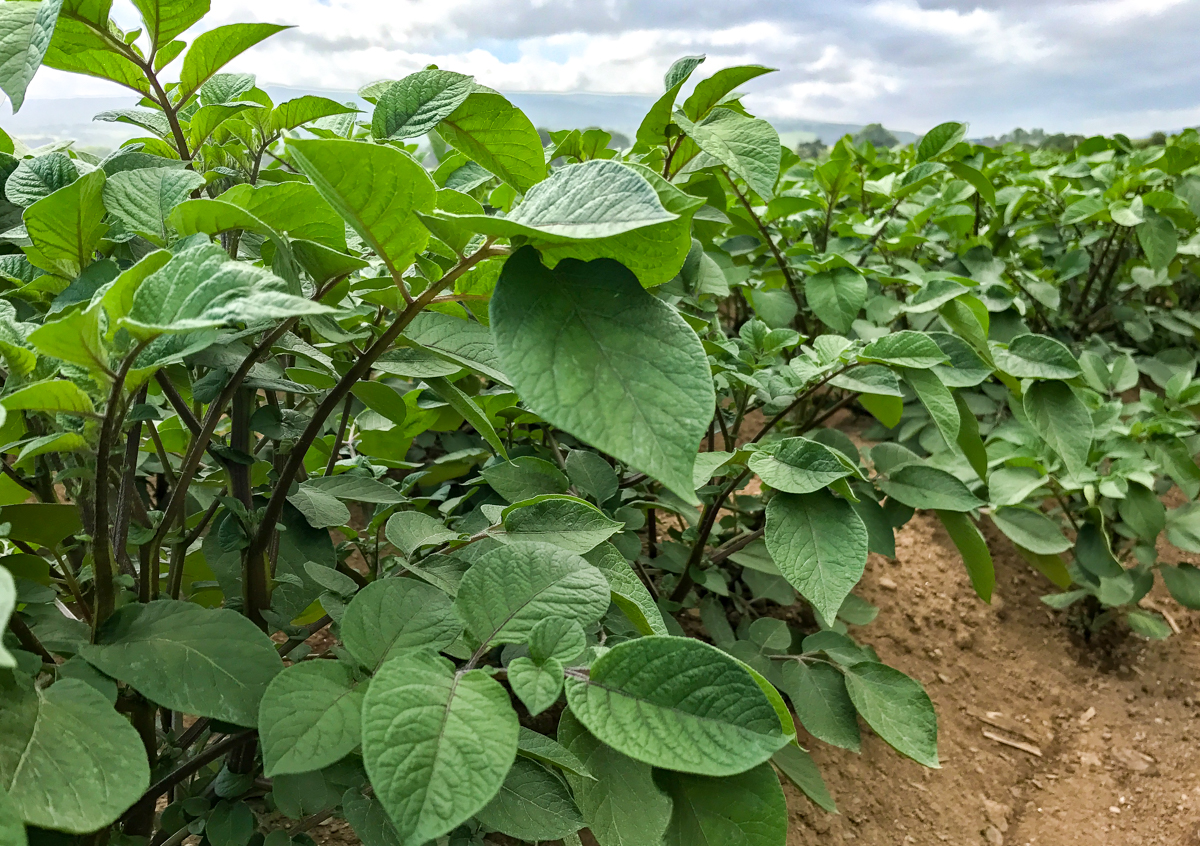 A crop of Rooster potatoes on O’Shea Farms

TJ O’Shea added: “The standards over the past couple of years are rising year-on-year. Top quality is demanded of us and irrigation is one tool that we use to achieve this.

“As well as good seed and good management, irrigation is another tool to get that top quality. While it is expensive, it is now a must for packing potatoes and washing carrots.”

Blight is still the most common disease. However, it’s controlled on-farm through good management and short spraying intervals, Thomas explained.

“We spray every seven days for blight. On average, we’ll put on somewhere between 14 and 16 blight sprays in a season for main crop potatoes.”

“We try and minimise as many volunteers (potatoes) as we can in the cereal crops. If we have volunteers in the same crop year-in, year-out, and we’re not controlling them, that field basically has potatoes in it for the five years. It’s not free from them.

“There would be issues carried over then. Powdery scab would be the main issue and PCN (Potato Cyst Nematode) to a certain extent.” 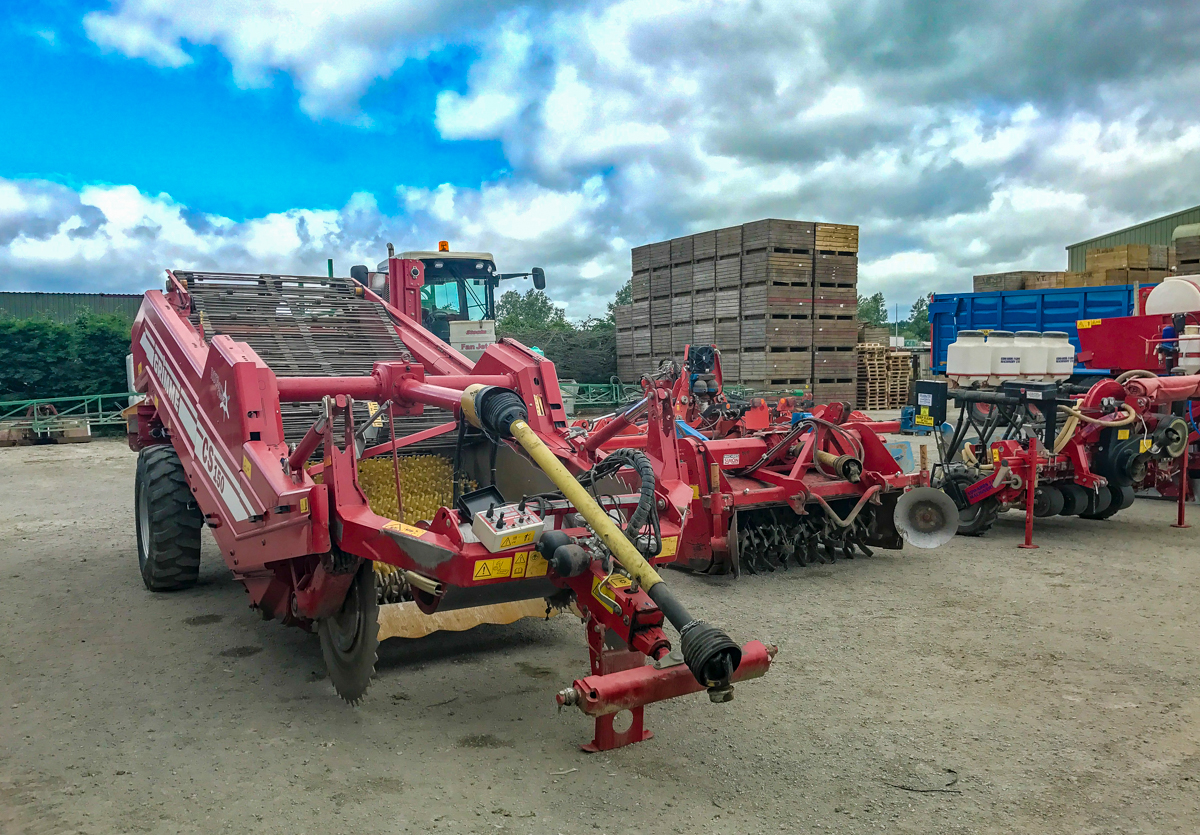 Some of the potato-lifting machinery on O’Shea Farms 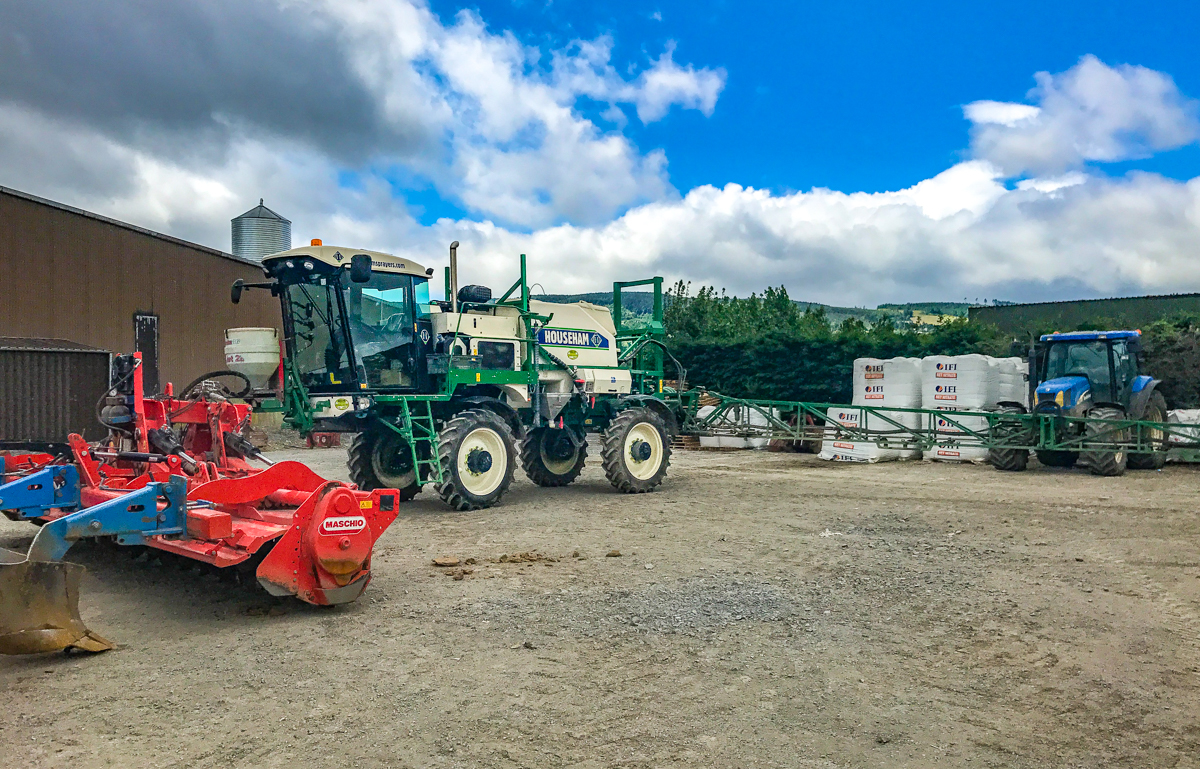 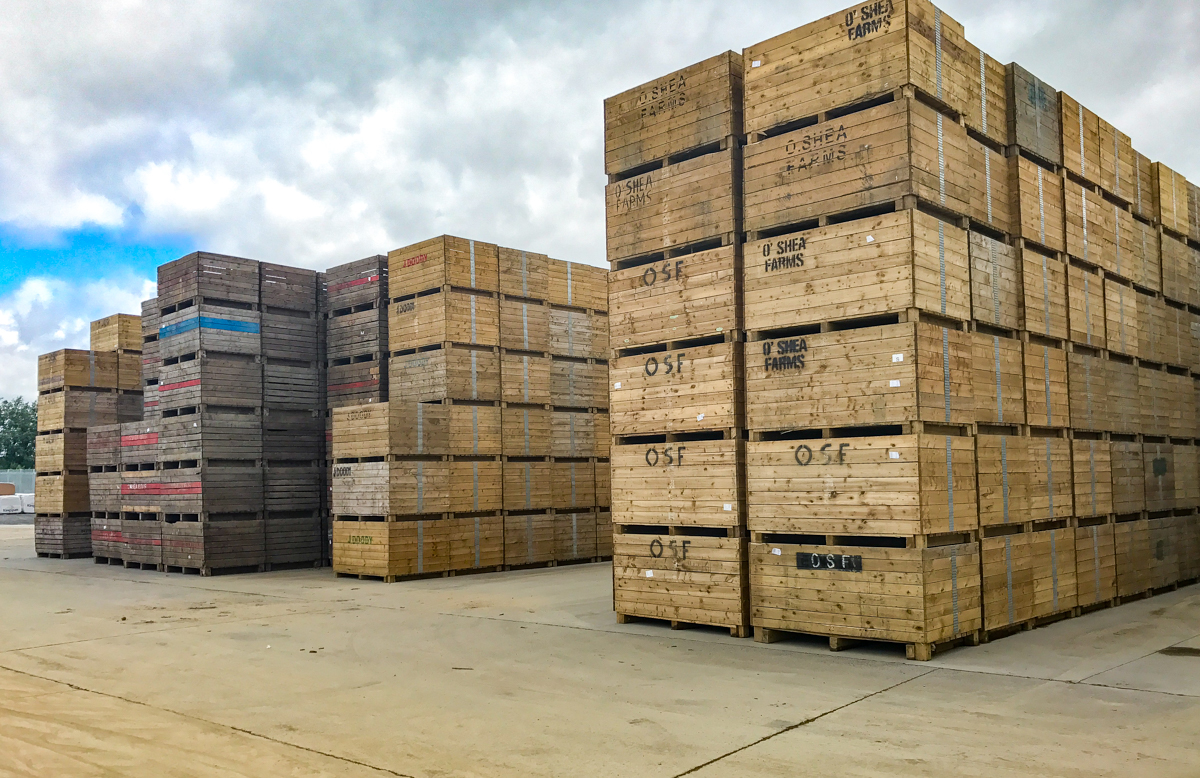 Potato boxes to be filled for the season ahead 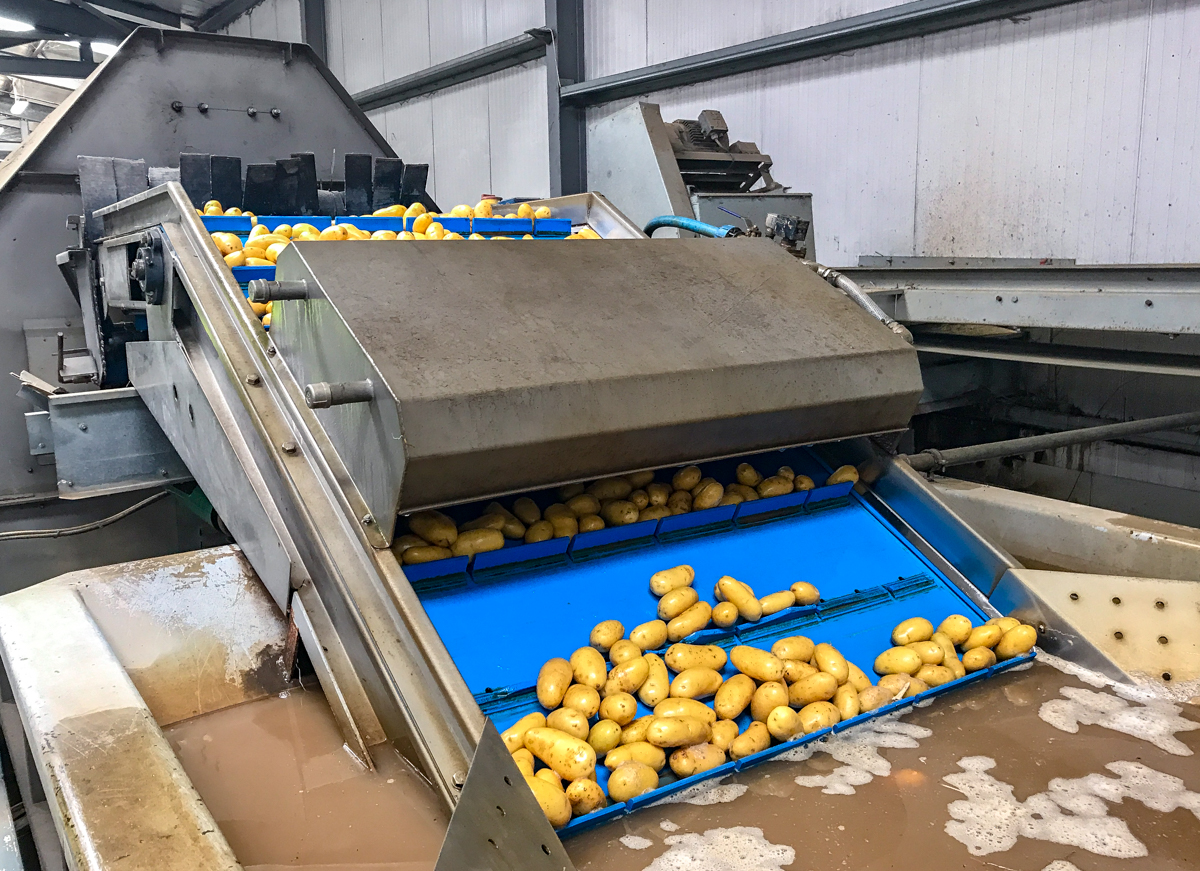 Potatoes being washed and graded 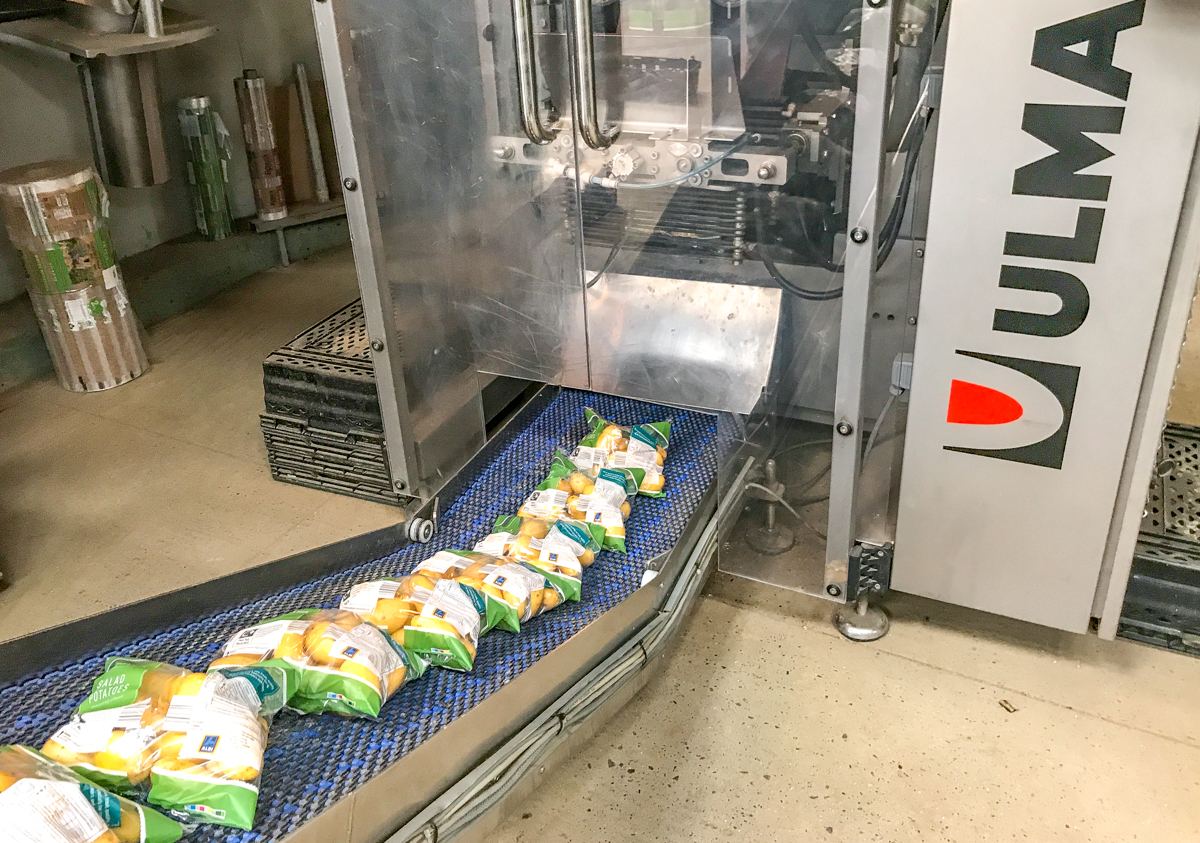 Potatoes finished on the line 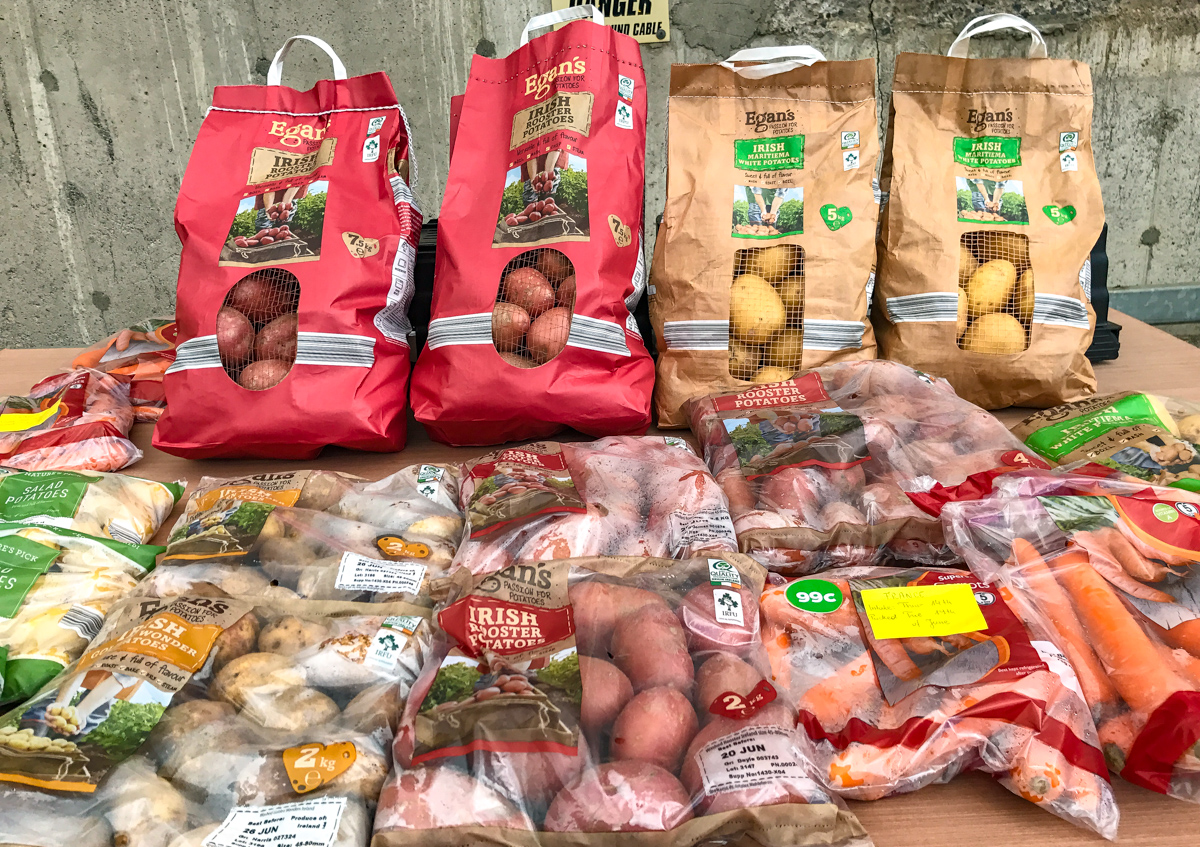 Some of O’Shea Farms’ products

The carrot season runs from July to April. Carrots are harvested at 05:00am in the summer and are ready for packing by 08:00am.

The carrots that AgriLand visited were planted on May 8 under plastic to speed up germination. Thomas estimated that sowing was four-to-six weeks behind this year because of poor weather in the springtime. 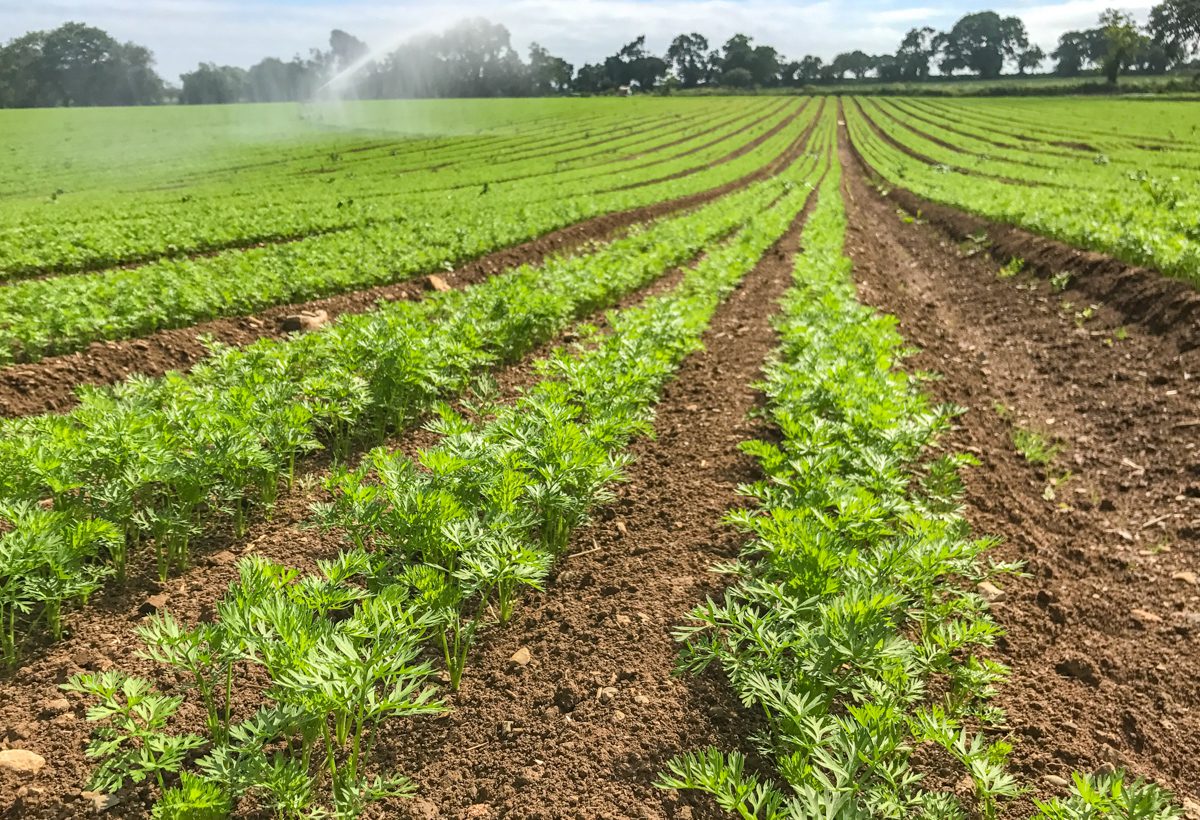 Carrots being irrigated on O’Shea Farms

The crop received 5:5:25 (plus boron and sulphur); this was broadcast on the seedbed. As the season goes on, leaf samples will be taken for trace elements. Carrots generally need boron, copper, manganese and zinc. The crop received just 50kg/ha of nitrogen.

Thomas explained: “They use very little nitrogen. Carrots are very good scavengers in the soil. The roots go down and they try and take as much nutrients out of the ground as possible. Carrots are a good crop at utilising what’s there.”

Weed control is difficult in carrot crops and O’Shea Farms purchased a camera-guided mechanical weeder. It is currently on its way from Garford Farm Machinery in the UK. 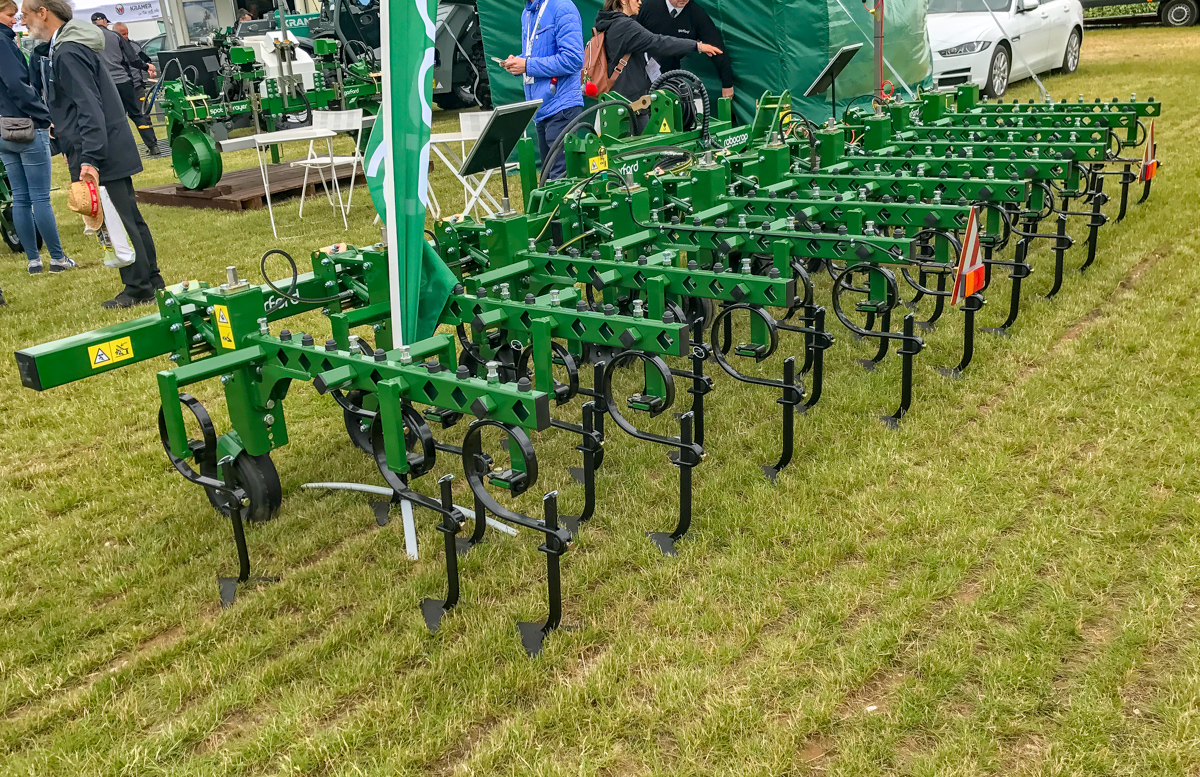 A camera-guided mechanical weeder similar to the one purchased

He added that while late sowing wasn’t ideal, it did have some benefits; the first generation of carrot root fly was missed by the crop.

The biggest pest of carrots is the Carrot Root Fly. We have sticky traps around the headlands. They migrate from the headlands out to the field.

The sticky traps work as part of the integrated pest management plan on the farm. The number of flies will determine the spray programme used. Seed is also treated with an insecticide dressing.

Sclerotinia is the major disease affecting carrots and this will be controlled with fungicides. 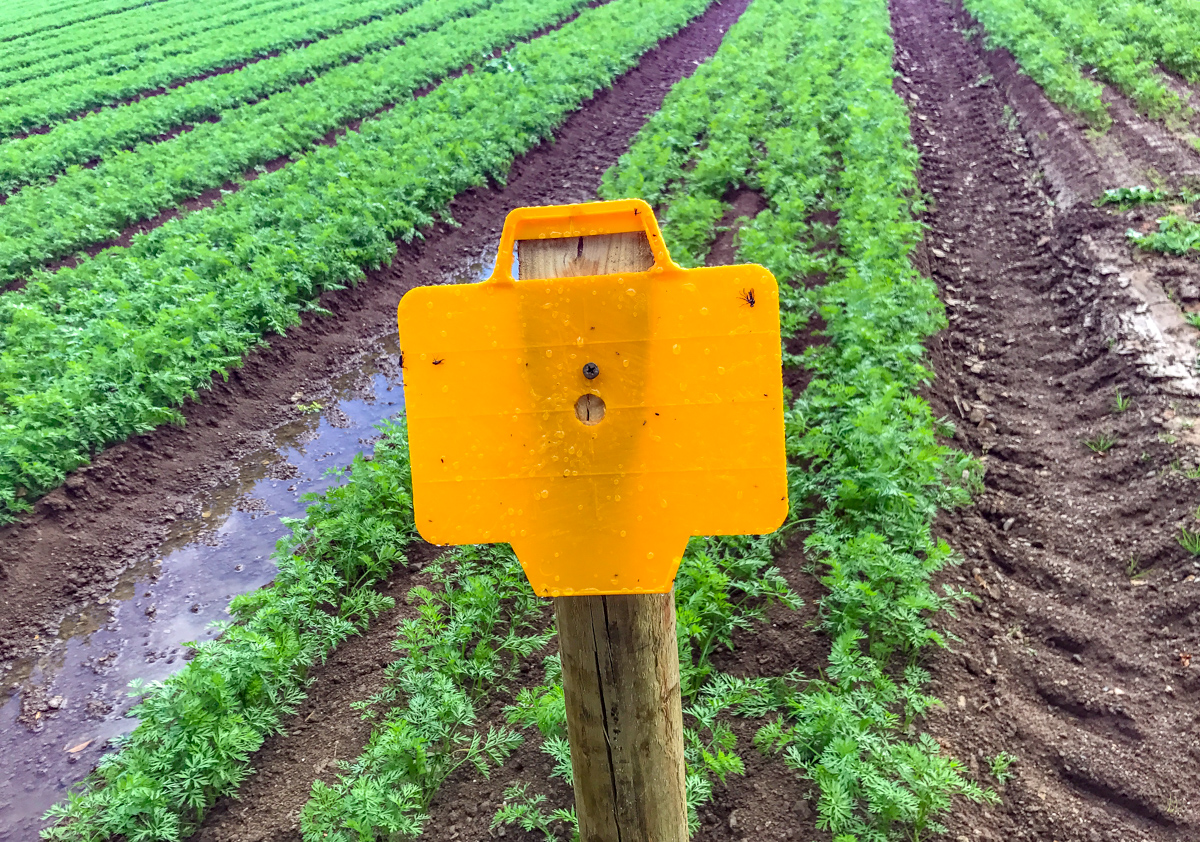 Fly traps are part of the integrated pest management strategy

Carrots for winter and spring consumption are harvested as needed. 38 Hesston bales per acre are used to cover the carrot crop and protect them from weather damage. On average, each year, that’s a cost of approximately €3,000/ac.

Elsewhere on the farm, the Planet spring barley sown on April 13 was one of the tallest crops that AgriLand has seen around the country.

Winter oats, grown for Flahavans, were beginning to turn in colour and the winter wheat had received its T3 fungicide on June 12. 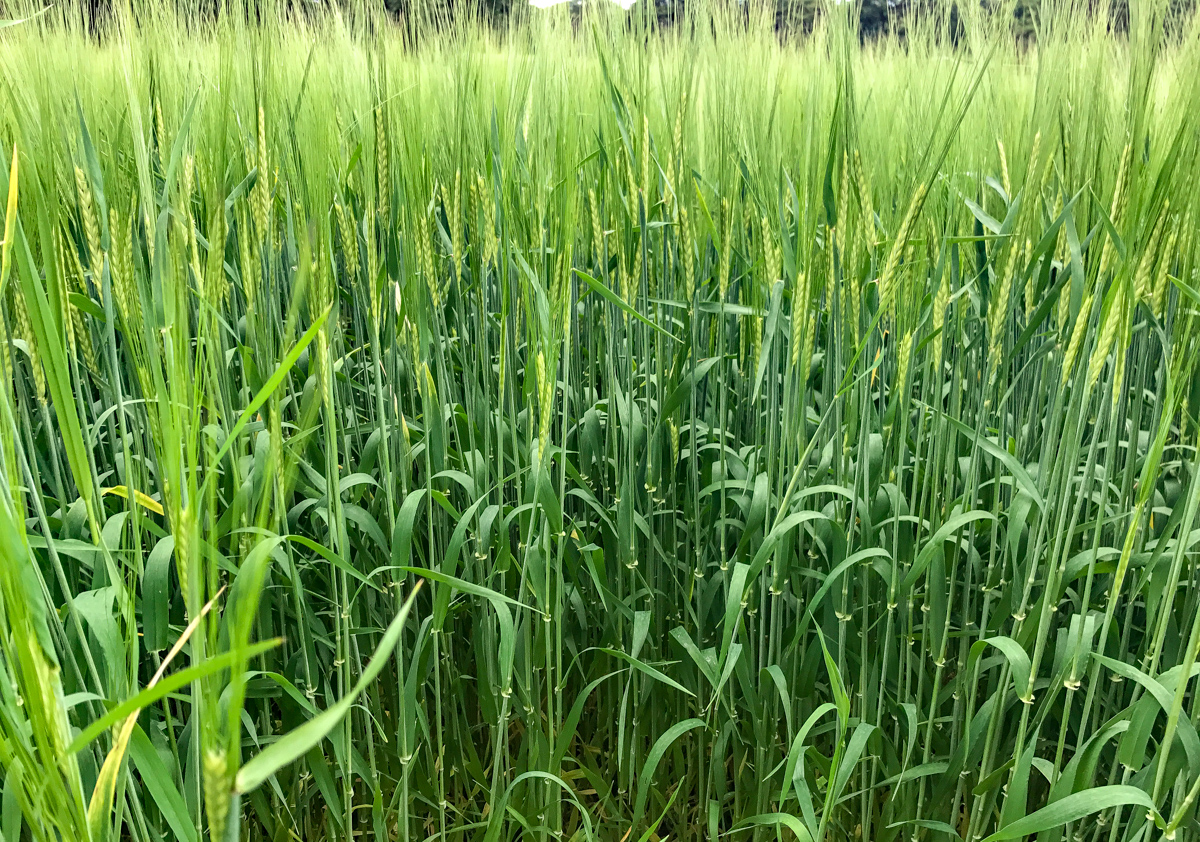 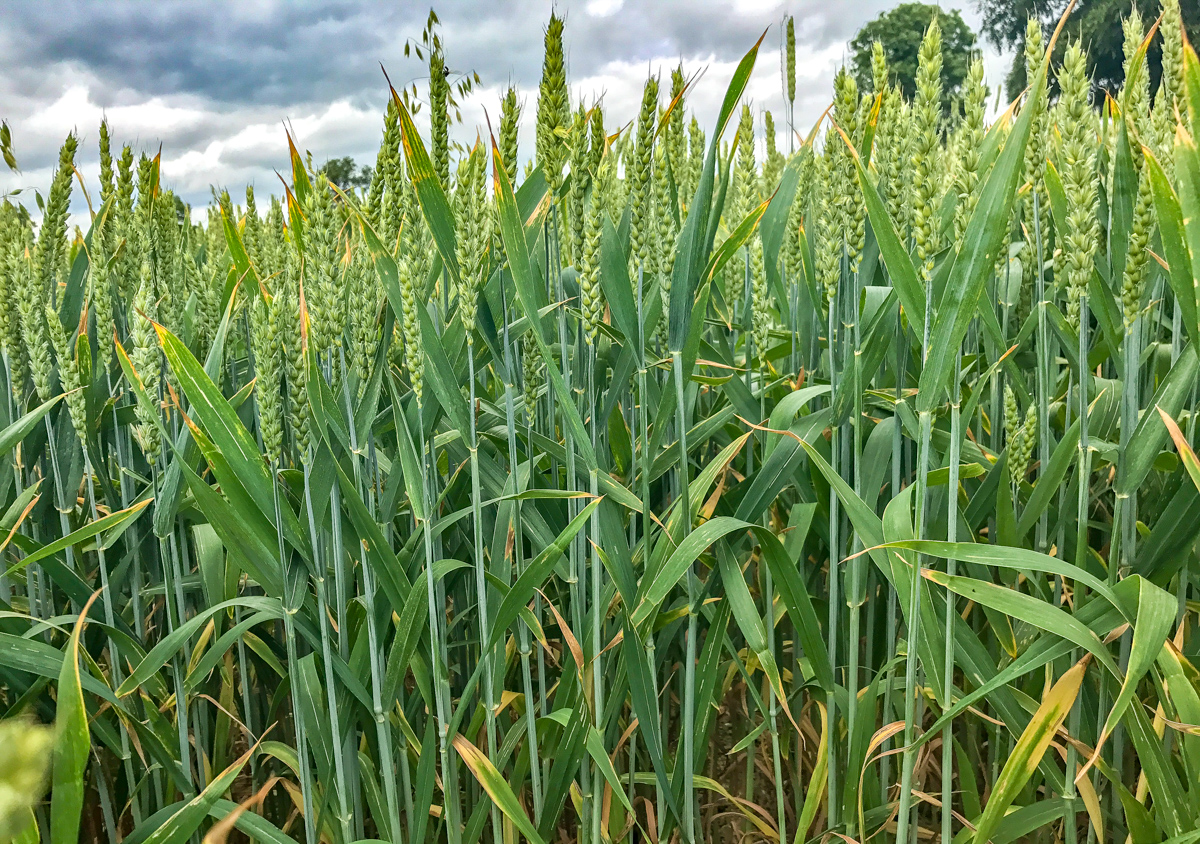 The winter wheat was applied with Prosaro on June 12 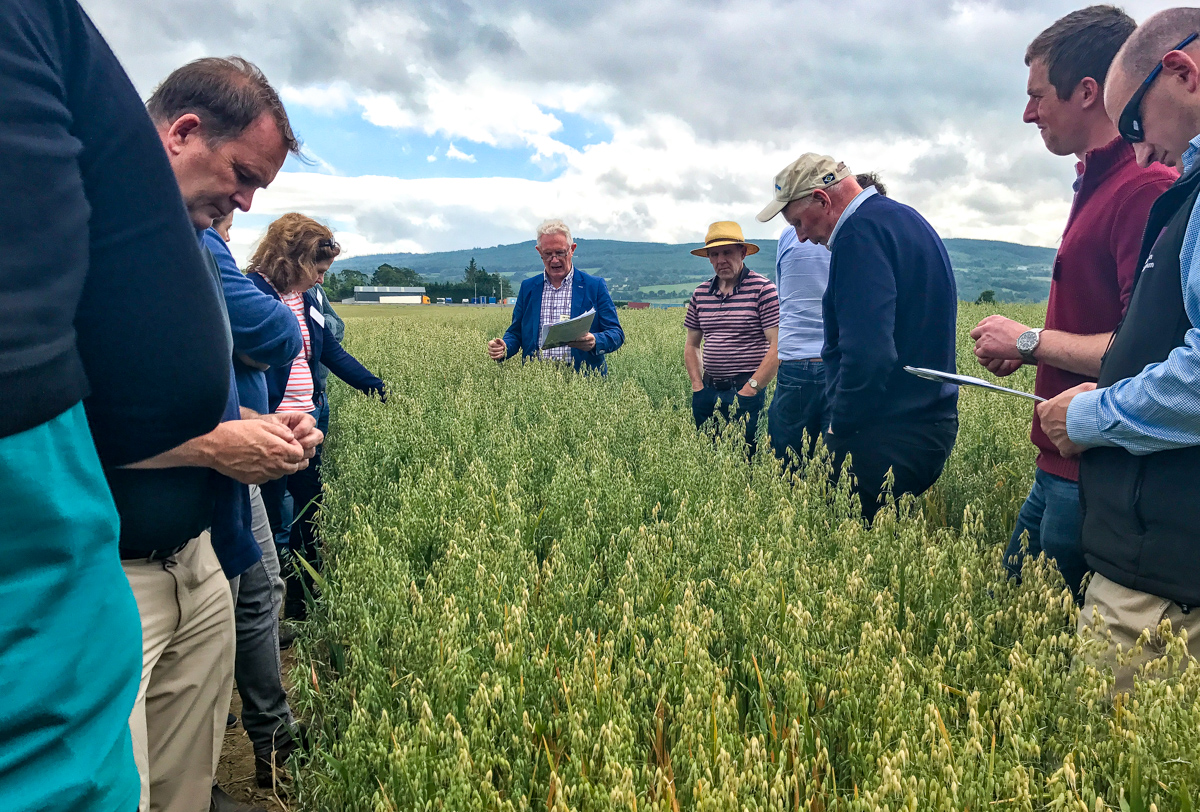 O’Shea Farms also works with 18 local, specialist vegetable growers, who produce other vegetable crops. One of these growers is Eddie Doyle, who grows swedes.

Eddie’s early swedes would usually be nearing harvest at this time of the year, but the wet spring means that the crop is approximately a month away from sale. 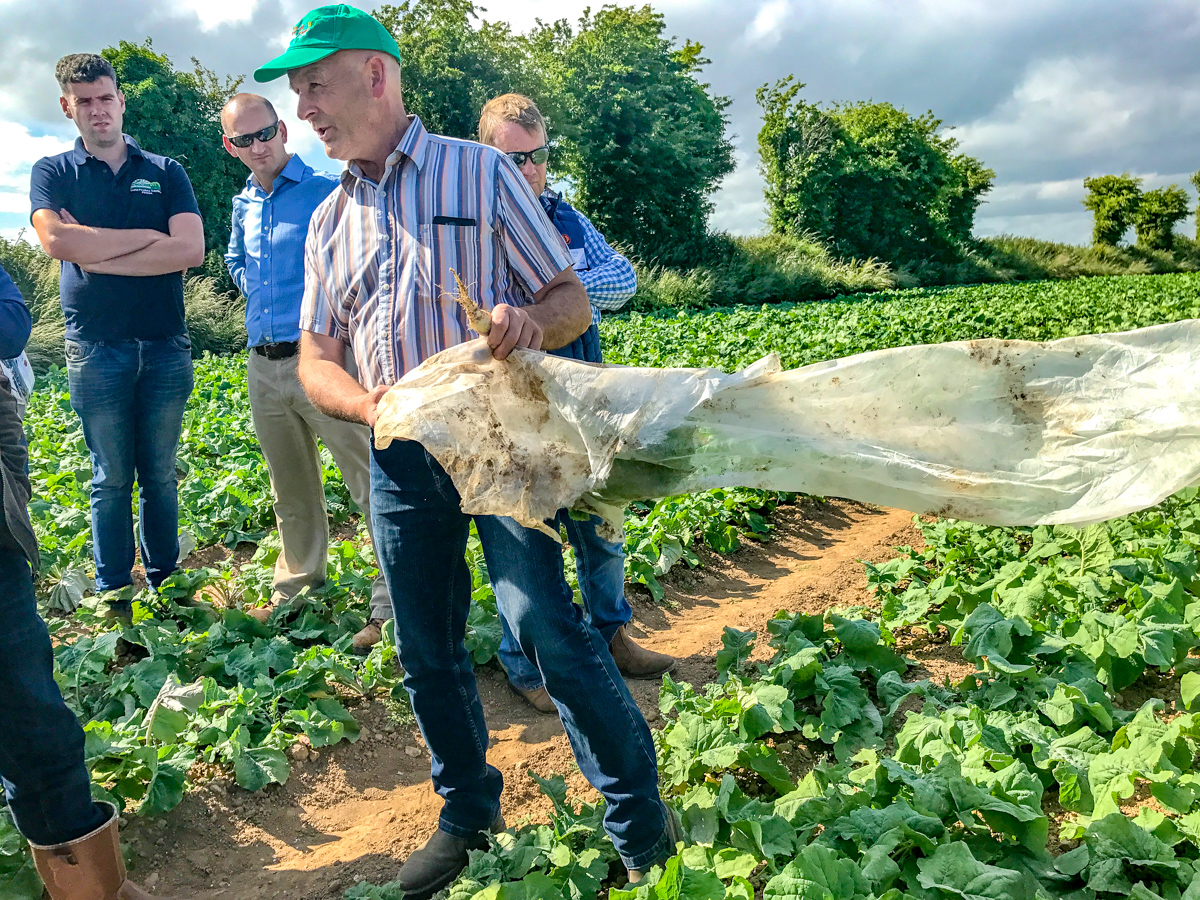 Tillage focus: Straw yield could drop to 4 bales/ac in the 'dry' south-east