Wheat price will go down. When it will go down is the million dollar question which James Nolan proclaimed he would love to know the answer to.

Rationing will play a big part in the drop in price, as three of the main exporting regions – the Black Sea, the EU and Australia – faced reduced yields this harvest as a result of drought. However, world stocks will deal with the deficit and supply will be met, according to James. 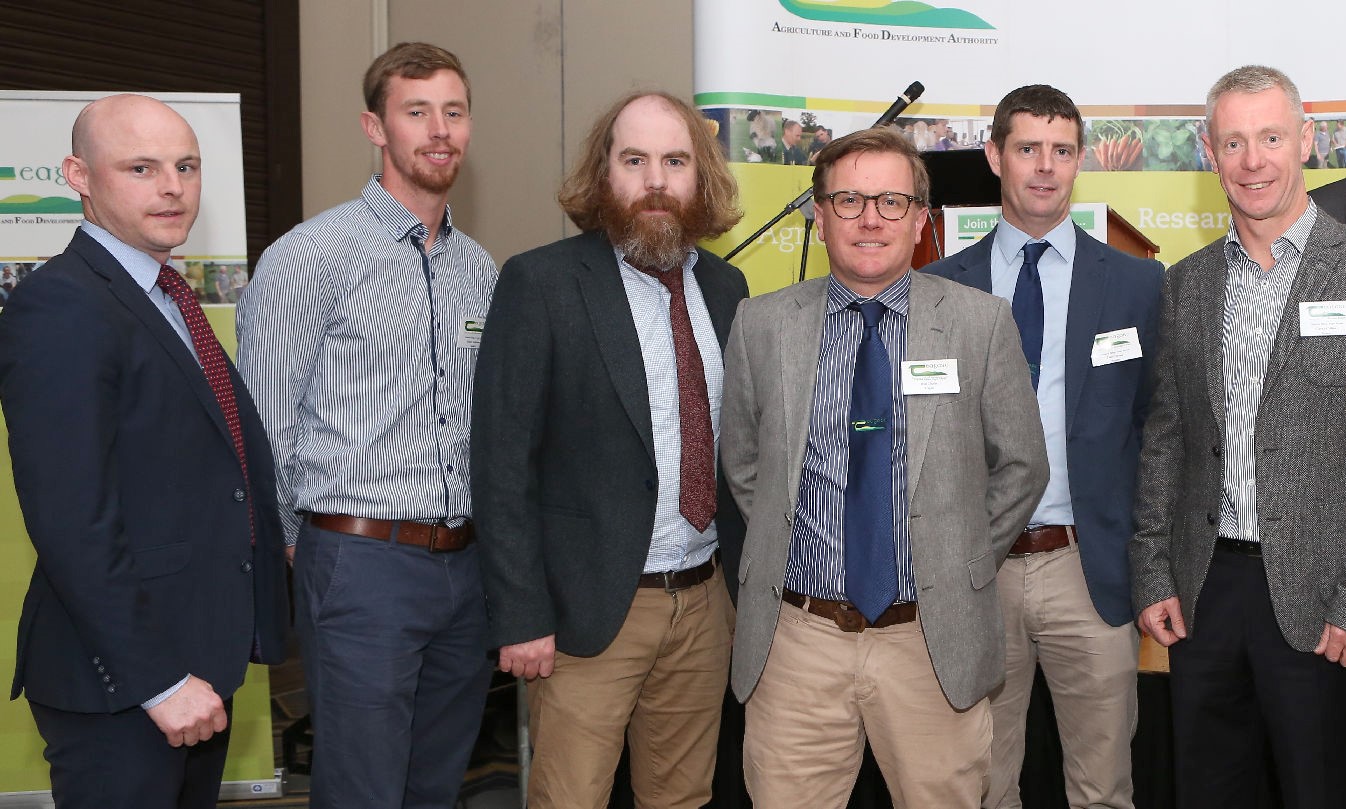 The grain trader described this season as a similar one to 2010 and doesn’t see price increasing in the short-term.

“Globally there is no real story on supply and demand,” James explained.

It is probably the first year in five where we are seeing a draw down on stocks; but we still have ample supply – it’s where those supplies are is the problem.

There is a shortfall of wheat from the main exporting regions. However, when James delved deeper into these regions the situation became clearer, and while supply should hold, this can only mean a drop in price.

“We’re seeing stocks in Russia declining this year – a country that has become the number one price-setter of wheat in the world.

“Last year it threw out a record 85 million tonnes. It consumed 40 million tonnes. The surplus had to go for export. The floor was the bottom – how cheap did Russia need to be to take demand away from other suppliers? 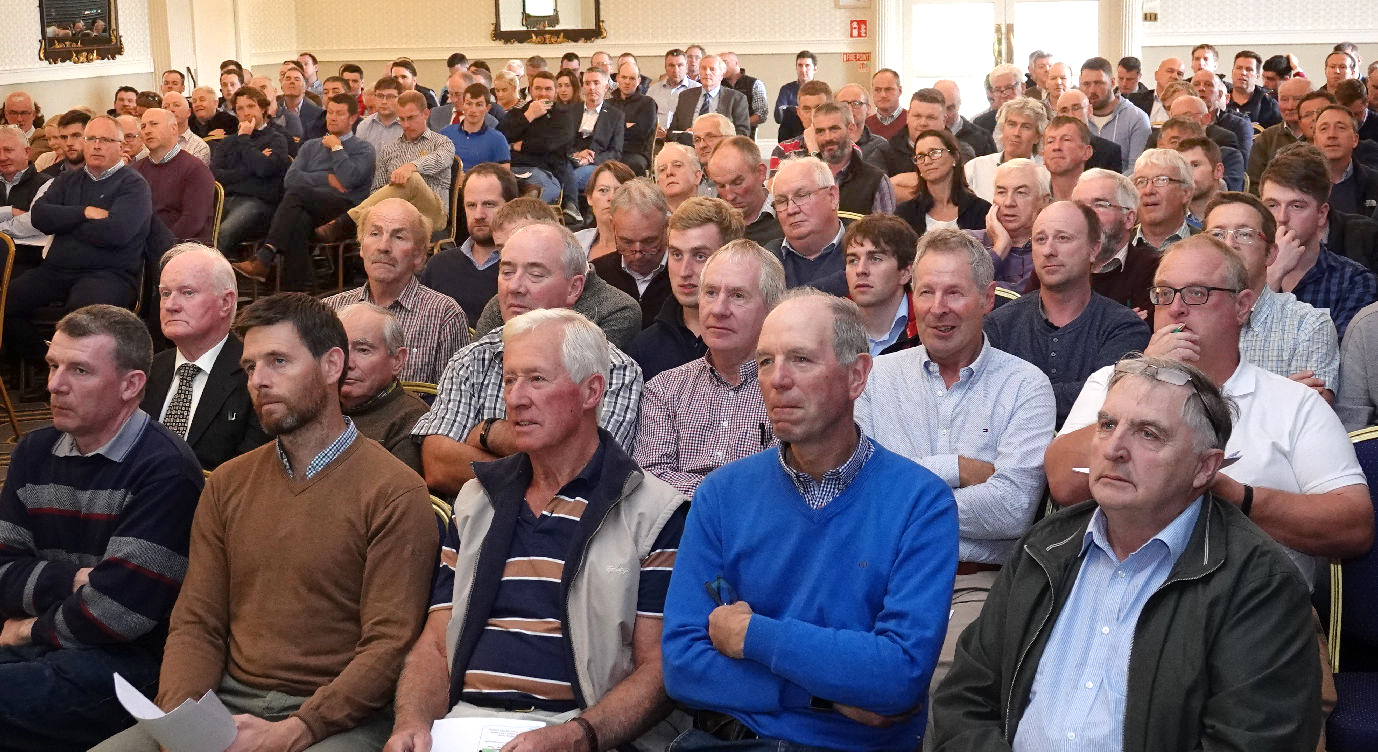 This season the country is carefully watching supplies and is expected to curtail exports at 25 million tonnes. James noted that the market rallied as rumours of this curb on exports surfaced.

This season Russia’s exports are well ahead of last year. 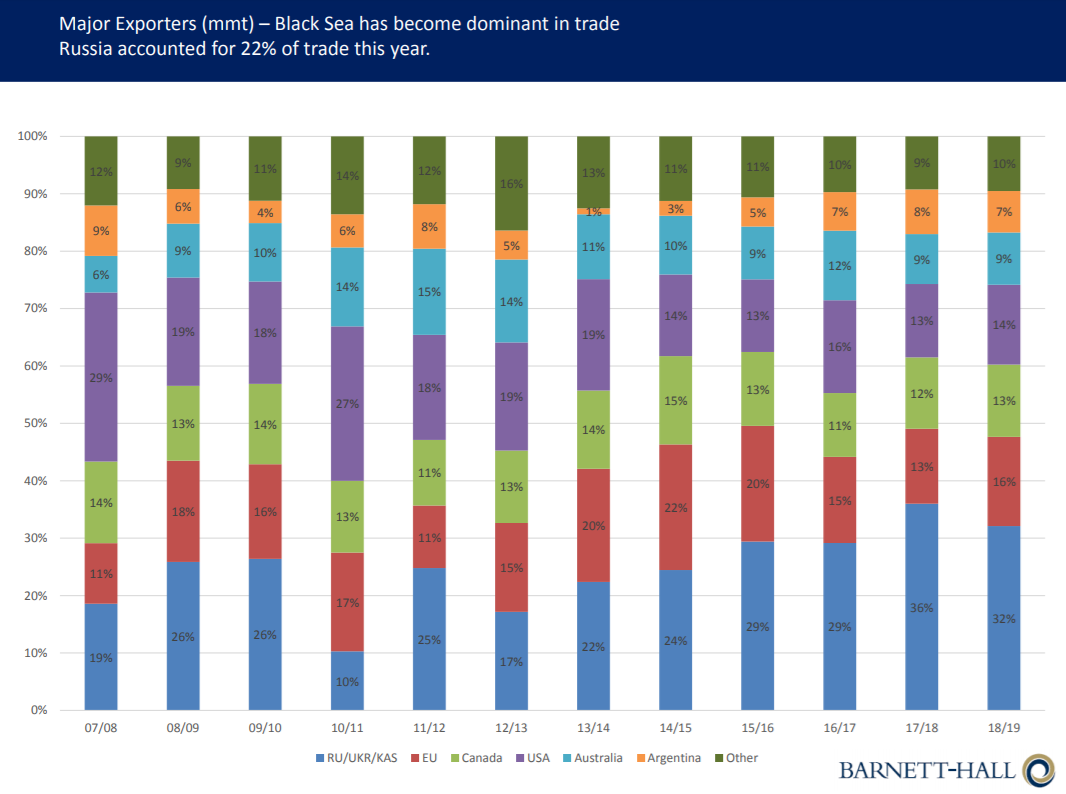 “If exports remain at the current pace, Russia will be at its exportable surplus of 25 million tonnes, and will start looking at export tariffs – at the latest in mid-January.

“Where does the market go for wheat then? The big buyers, Egypt and North Africa, where do they go for grain? That’s what the rest of the world is waiting for.”

James explained that the wet autumn was the beginning of trouble in Europe and the Baltic region – which has become more dominant in the export market for feed wheat in Europe – saw planting drop by 25-30% in Sweden and Denmark.

“Denmark, which is normally a net exporter of 1.8 million tonnes, is now a net importer. It has to import 200,000-300,000t. Sweden is another very big exporter. It will probably end up importing wheat.”

Germany has been a very active buyer of feed grain already this harvest.

“The change was Spain. It had a great spring – record yields. It will not be an importer. Spain normally imports 2.5-3 million tonnes of barley.

Current supply and demand in the EU

“Demand for feed wheat in Europe is probably going to decline. It actually increased last year to over 130 million tonnes. It’s likely that it’s going to decrease to 125 million tonnes, but at the current price difference between wheat and maize, less wheat will be used.

“At less wheat demand in Europe, in theory, can manage to export 23 million tonnes and still carry out. The unknown here is where demand will be and is it physically possible for Europe to get out exports?

“Come next June, Europe could have ample wheat supplies in store and it’s a worry longer-term for the wheat market in Europe. 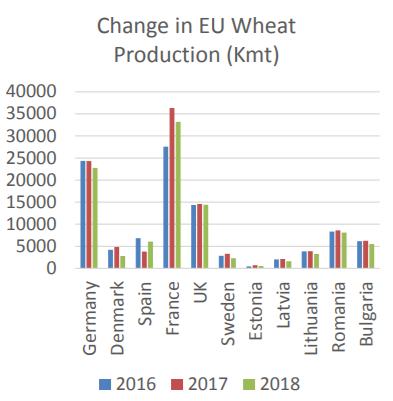 “In the US, stocks are reducing year-on-year. But, if you go back over history, they’re still very, very high. There are still 25 million tonnes of stocks; traditionally, it has been 20 million tonnes and it increased in the last four years up to almost 30 million tonnes.

At an ample 25 million tonnes. The US will probably be the key to how prices go.

Corn remains competitive with a lot of maize coming out of the Black Sea and South America. The US is also trying to re-enter the export market as ethanol demand reduces. Although US stocks are falling, they are still historically high.

“The world has been full of maize. It got nervy early in the year, but since the springtime when the US farmer planted 88 million acres and Ukraine increased its area, there has been no story in maize and it has gradually ground lower and lower.

The maize market has become boring, for want of a better word.

“The yields that are being talked about in the US are exceptional. Ukraine had a very dry summer – it got rain in early July. Their yields so far are up 20% year-on-year. They’re up 12% in five years after having a drought. The question now is: How much better can those yields get?” 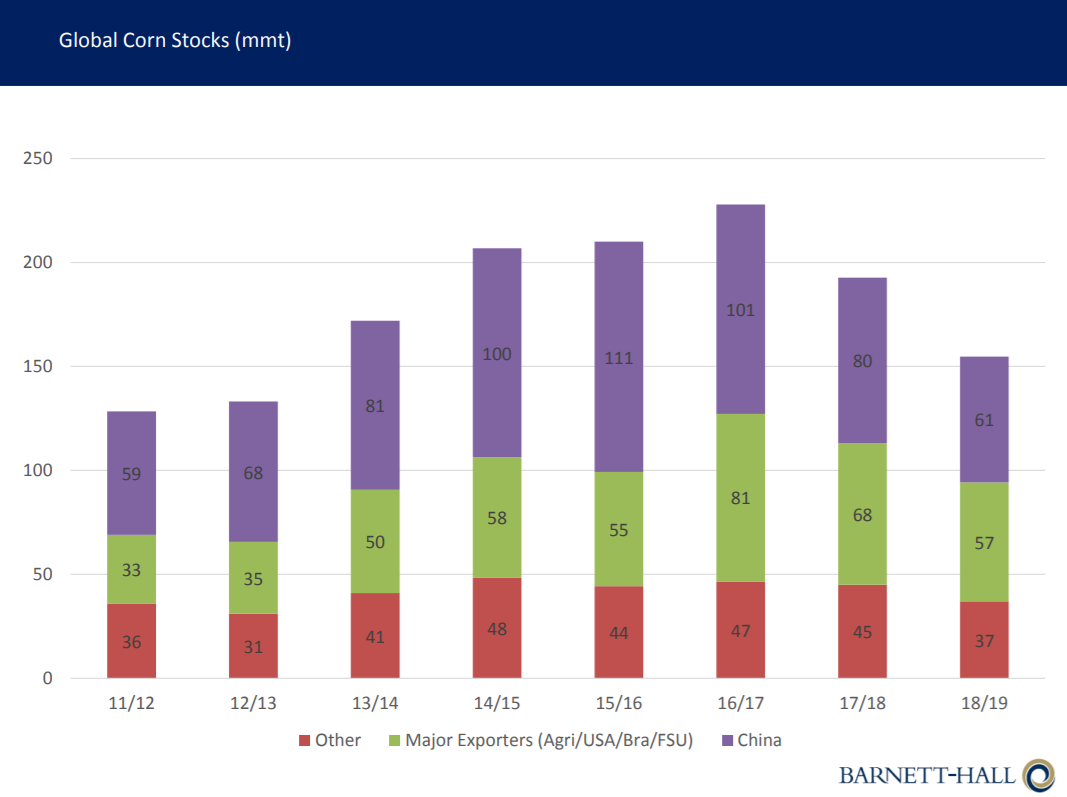 “Global barley is the most bullish of all the grains,” according to James.

Certain countries will only buy barley, which results in exporting countries using less to meet demand.

“There’s a certain amount of inelastic demand for certain nations which just buy barley. If the supply is getting smaller, and these countries are beginning to buy more, it’s going to have to be used less somewhere else.

“Global stocks continue to fall. The demand is coming from China and Saudi Arabia; it’s demand that can’t switch to another product and as a result, with less supply in other parts of the world, the EU for instance – a net exporter of barley – is being forced into using less barley domestically in its own global market and is exporting to Saudi Arabia and China.” 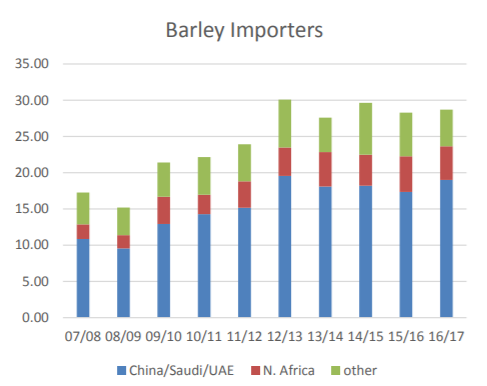 According to James, the driver of barley price is that the supply is limited to a small number of regions, the majority of which – the EU, Australia, the Black Sea – suffered from drought this year.

“What you’ll have to see in Europe is a local rationing and price will drive that; without a doubt that is happening already.

Barley is trading at historic premiums to both wheat and maize. We’re seeing that our market consumers are switching to maize.

“The UK has 200,000t of extra barley this year. What they’re actually doing at the minute is beginning to import maize and export barley. People are beginning to substitute.

“They’re selling barley at a premium and buying maize cheap. It’s physically happening and it’s one to watch.

“They can’t afford to. If they can’t buy barley or wheat today, they will buy what they can, and if that means substituting, they will. What we’ve seen in the last two to three weeks is that consumption across Europe has plateaued.”

James thinks that wheat prices are good at present – sitting above the five-year average.

Even though supply and demand is as tight globally, this year there is an alternative in the form of maize, and that wasn’t there in 2010.

The US maize crop was devastated in 2012, and as the crop is extremely promising this year, James finds it hard to see the price rising into the winter.

“2010 was very similar. There were talks of Russian export taxes. There was maize in the market. The market talked out in early November and had everything factored in.

“At that stage farmers were beginning to increase their area for next year’s crop and the rationing process had done its thing.

“Already you see the market has dipped. Some of that is price rationing. Harvest is over. The market is taking a breather here and I think you could see that springtime is where it’s going to get interesting again.

I think in the near term it will probably drift lower if anything. I don’t see where the demand will come from today.