The Connemara pony: Hardened and shaped by the Atlantic 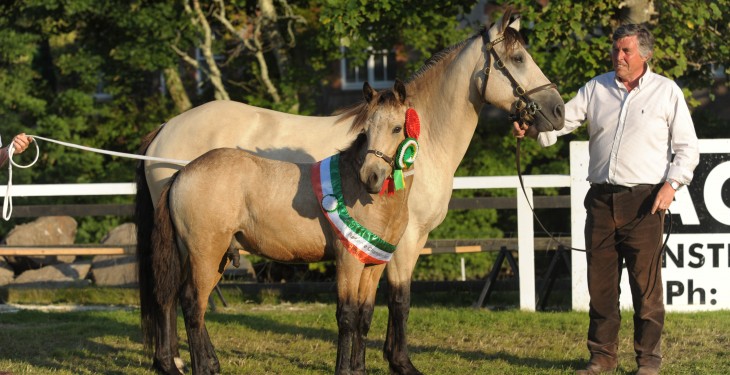 The Connemara Pony is renowned worldwide for its athleticism, intelligence and docile temperament.

The breed is hardened and shaped by the wild Atlantic coast of Connemara and a surefooted and strong animal has developed over time.

The origins of the breed are debated by many, some believe the Connemara pony dates back to the Vikings while others contribute their roots to the extinct Irish Hobby which survived until the 13th century.

Others claim the Andalusian horses from the Spanish Armada which ran aground in 1588, bred with the native stock, refining the local ponies.

Regardless of their origins the Connemara pony has developed into a hardy breed capable of thriving on the scant vegetation of the region.

The Connemara Pony Breeders’ Society (CPBS) was established in 1923 by Michael J. O’Malley and others concerned with the level of crossbreeding.

The CPBS purchased five stallions, all measuring below 138cm in 1924 with the aim of preserving and improving the breed bloodlines.

The society also requested nominations for 125 brood mares and in 1926 the Connemara Breeders stud book was established.

Thoroughbred, Irish Draught and Arabian stallions were bred to Connemara mares in the 1940’s to widen the gene pool and this selective breeding programme added height and athleticism to the breed.

The addition of height has changed the dynamics of the Connemara pony as they can be ridden by children and adults.

They are favoured by amateur horse riders as they are noted for building confidence and bringing riders on to the next level.

Every year hundreds of equine owners set off in a quest to get to the Royal Dublin Society (RDS) Horse Show and since 1951 the Connemara ponies have classes specifically designed to showcase our native breed.

In show jumping, Connemara ponies compete against all other breeds. This year four Connemara mares have qualified for the RDS 148cm jumping classes, two fully registered and two part-bred.

These mares can be traced back to bloodlines such as Carna Dun, a stallion born in 1948. He is the only registered stallion sired by a small thoroughbred Little Heaven.

This was a valuable move by the CPBS as many jumping ponies can be traced back to this prolific animal.

The thoroughbred influence injected scope and speed into these bloodlines while the Connemara’s calm nature is a prefect recipe for a quality jumping pony.

The RDS 148cm Winner in 2014 was a fully registered Connemara pony called Doon Laddie, he is owned by the Leonard family from Claregalway who are keen breeders of show jumping Connemaras.

This pony also competed at the puissance at the Connemara Pony Show in Clifden and he is a true symbol of the West.

As the tally of international wins increase, buyers are starting to recognise the unique qualities of Connemara’s which should pay dividend to breeders that have remained faithful to the breed in good and bad times.

Even though the trade on top class Connemara jumping ponies has remained steady, inflated prices paid for mares and foals during the boom has resulted in an unstable market.

Foal registrations have plummeted and trade on mares has been decimated. In recent months, prices are rising and the current sterling rates should improve matters at the Connemara Pony Sales in Clifden between August 22 and 23.

While the top show jumping Connemara ponies will compete at the National Pony Championships in Mullingar, the Connemara Pony Show will run concurrently in Clifden between August 19 and 21.

The first Connemara Pony Show was held in Roundstone in 1924 and moved from place to place until it settled in Clifden in the 1940s.

The Roundstone show has been revived by Paddy ‘Yank’ McDonagh and passionate committee members.

The showground paints a true picture of the Connemara landscape and is the perfect appetizer to learn about Connemara ponies.

The Connemara Pony Show has been a traditional holiday venue for many families and this year’s show is an ideal opportunity to give the next generation a taste of something magical.