A growing number of small independent spinners are seeking alpaca fleece and this is an expanding part of the Irish alpaca industry, according to Louisa and Nigel Brooks of Glenbrook Alpacas which is located in Taughmaconnell between Athlone and Ballinasloe.

“Their fleece is really fine and dense. It’s not greasy. It’s hypoallergenic, with thermal properties. There are 22 recognised fleece shades, ranging from white to fawns, grey, brown and black,” Louisa said.

“The fibre is graded, depending on colour and quality. White is the most desirable as it is easily dyed. The fibre is turned into yarn, jumpers, throws, coats, duvets, pillows and socks. The end products can be quite expensive.”

Demand for fleece and product is growing here in Ireland, according to the Taughmaconnell couple. “There are some cottage crafting industries working with alpaca owners, spinning the fleece and producing top quality yarn.

“There is no dedicated commercial alpaca mill in Ireland but Olann in Cavan will process the fleece. In the last few years, smaller alpaca owners have come together and sent their fleece to mills in the UK to process in return for product, if they wish,” Louisa said.

“Shearing happens yearly, but it’s specialised as the legs need to be restrained during the process so as not to hurt the animal,” she said. 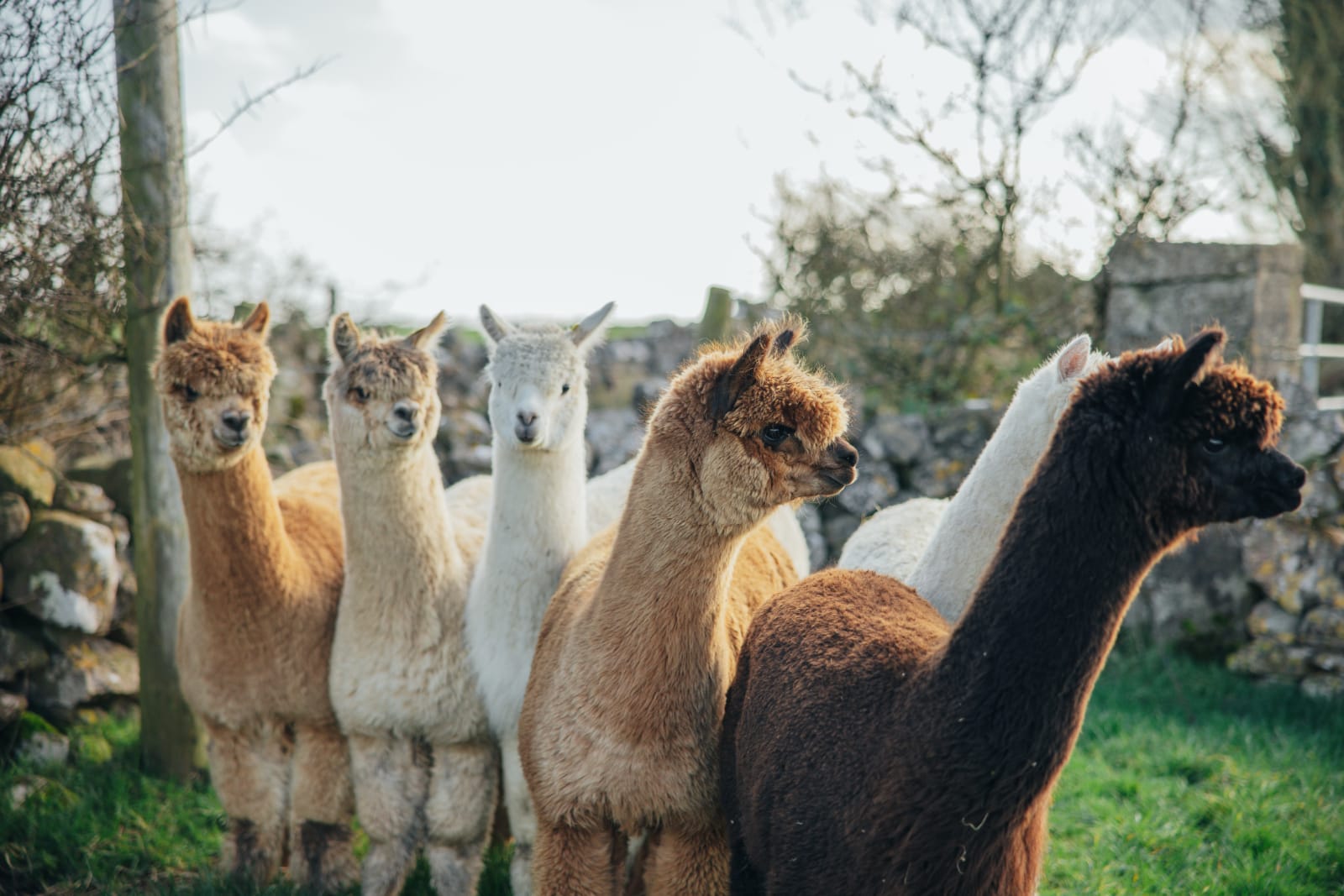 When our alpacas arrived ten years ago, they were a big attraction. There weren’t any others around Taughmaconnell. Last reported by the Alpaca Association, there are now 4,000 registered alpacas in the country.

The Brooks family was first introduced to alpacas at Tullamore Show in 2011. “The Alpaca Society was holding a show and exhibition there. The alpacas were placid, easy to handle and their fleece was so soft to touch. It was easy to fall for them.

“Although we are from farming backgrounds, we didn’t have a farm but we had an acre and have since rented two fields. On average, you can stock up to six alpaca per acre, depending on quality,” Louisa said.

“We had traditional pets and at the time we had two small boys. We wanted an animal that they could interact with and grow with. Alpacas seemed to fit the bill.
After doing our research we discovered that alpacas are relatively easy to keep and are low maintenance. We didn’t need extensive farming knowledge and we didn’t need a herd number to keep them.”

The Taughmaconnell family started their venture by buying two pregnant females Nyali and Natasha with two crias afoot, Eyelyn, and Lola. They now have 12 alpacas and their children have three.

“We have worked with established award-winning UK breeders such as Inca Alpacas and Chas Brooks, Classical Mile End Alpacas to improve the quality and genetics of our herd. Along with our breeding females, we have two champion stud males. This year, in addition to the traditional spitting off, we are also offering a new scanning service to confirm pregnancy,” Louisa said. 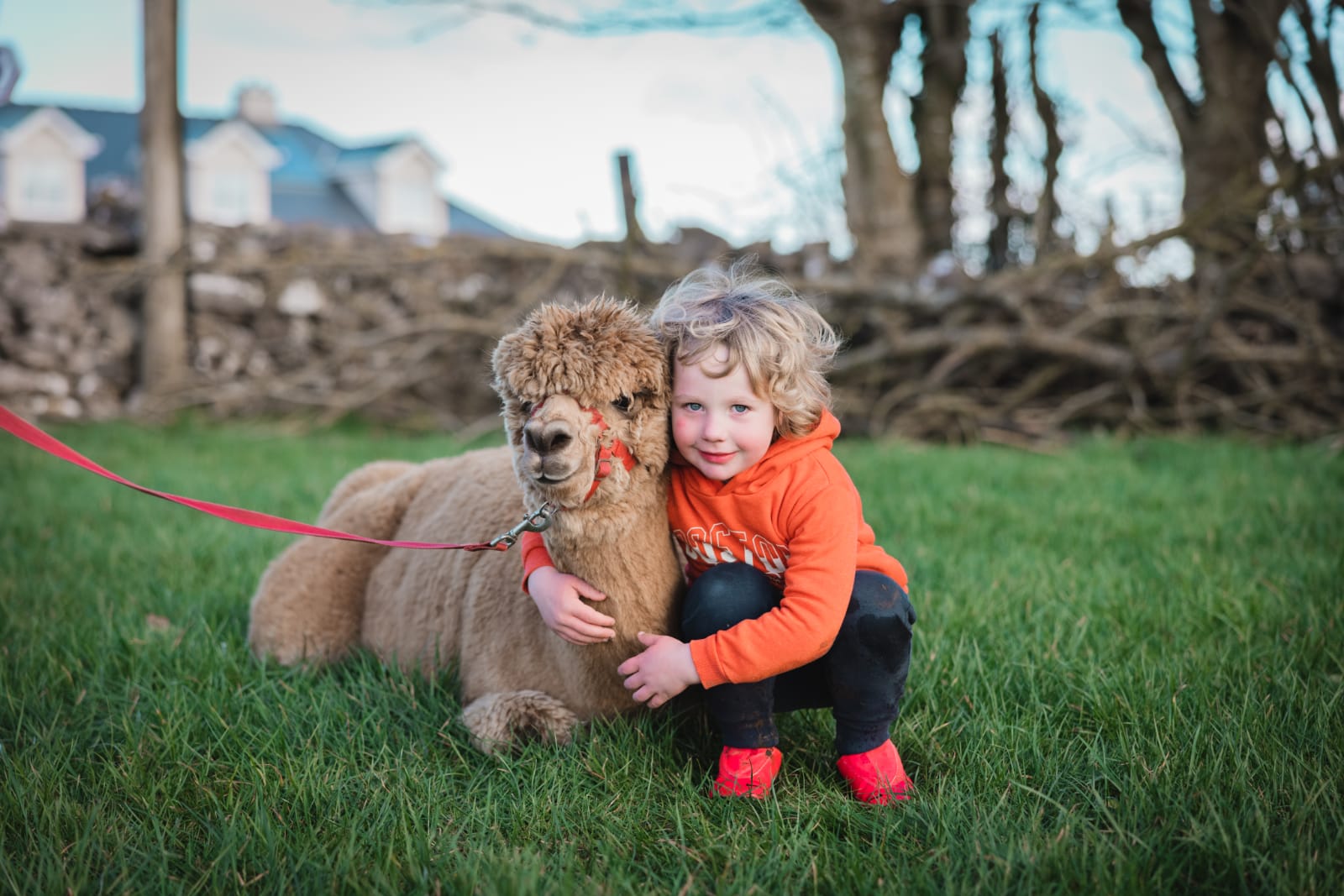 “Alpacas come from the camelid family. They are a native animal of South America but they can be found worldwide. Alpacas are very gentle on the land because they have padded feet and therefore don’t cut up the ground.

“There are two types: the huacaya which has a fine dense fleece – the type we have – and the suri which has fleece that hangs in long ringlets. They are traditionally kept for their luxurious fibre.

Alpacas are herd animals. They need companionship and can’t be kept as singles, nor can you run your males and females together.

“They are hardy animals and can live up 20 years on average. The females tend to be most desirable for their breeding ability. Alpacas are induced ovulators and therefore can be bred any time although planning for summer births is preferable. The females are generally re-mated, usually six weeks after giving birth. Alpacas have a gestation of about 11 months but it can vary,” Louisa said.

“Alpacas are very inquisitive so they will wander over to people. They are known to be guard animals and will ward off predators that enter the field. They often sit with their bodies aligned with their heads back to back so that they can guard the four corners of the field.

“They seem to recognise family dogs and farmers have had experience of them chasing away other dogs. In Australia, commercial sheep farmers have actively and effectively used alpacas to protect their flocks,” she said. 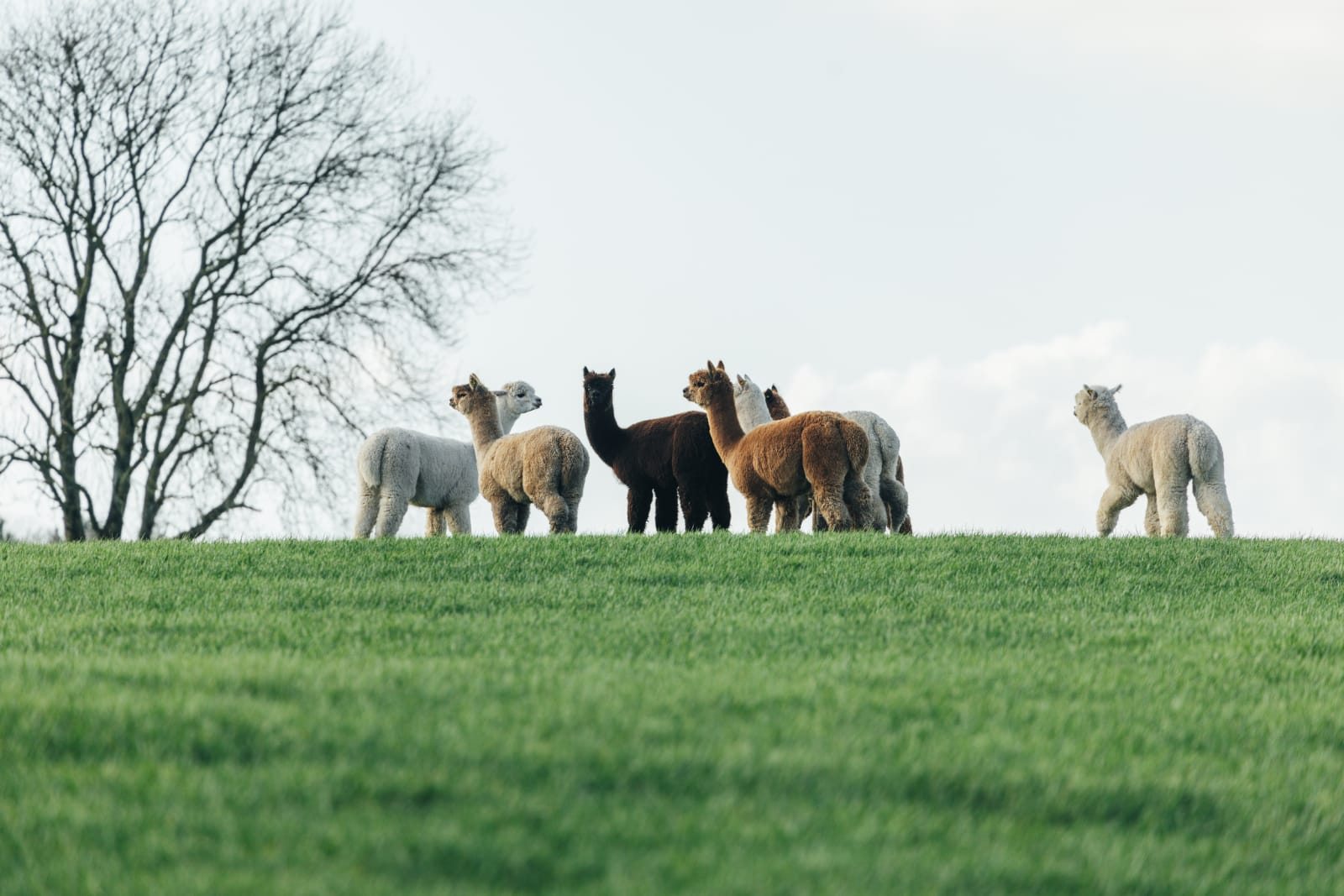 “They look similar to llamas but they are usually smaller with shorter necks. We think they are cuter. They generally don’t spit like llamas but they can if they need to. They see it as a way of protecting themselves.

“Likewise, if you walk behind or frighten them, they could kick out. Alpacas don’t like when you rub the top of their heads. When handled properly they are very loveable. They are docile and make friends with humans easily and will take nuts from your hand. You can start halter training them from six months on.”

Louisa and Nigel’s four children enjoy walking their alpacas and preparing them for shows.

“They have their jobs to do, looking after them after school. We love taking the alpacas on treks with the family, especially in these times when they are a great distraction. Alpacas are growing in popularity and make great pets and companions for anyone,” said Louisa.

“The crias weigh about 6-8kg. There is always great excitement watching for them to arrive. They are born usually in daylight hours.

It is fascinating to watch how all the females gather round and look after the mum during the birthing process. They look after the cria until the mum has recovered. The cria is usually up and running around within an hour of being born.

“Alpacas feed on grass but during the winter months they need hay or haylage and supplementary feed. To feed five alpacas in winter, they would eat one bag of nuts and up to three small square bales of hay per month. We offer hay all year round as the roughage is needed for their digestive system. They also like a supply of clean drinking water,” said Louisa.

The grain mills in Ireland, she said, have identified the opportunity to create a specific alpaca feed to meet all their dietary requirements which is sold by the pallet. “We have a supply of alpaca feed from Kiernan’s Mill in Granard and we are able to provide bags locally to people who only require small amounts.”

For the growing number of people expressing an interest in alpacas, the Taughmaconnell family recommend carrying out extensive research. “When possible visit some alpaca farms, gather as much information and see how they handle. 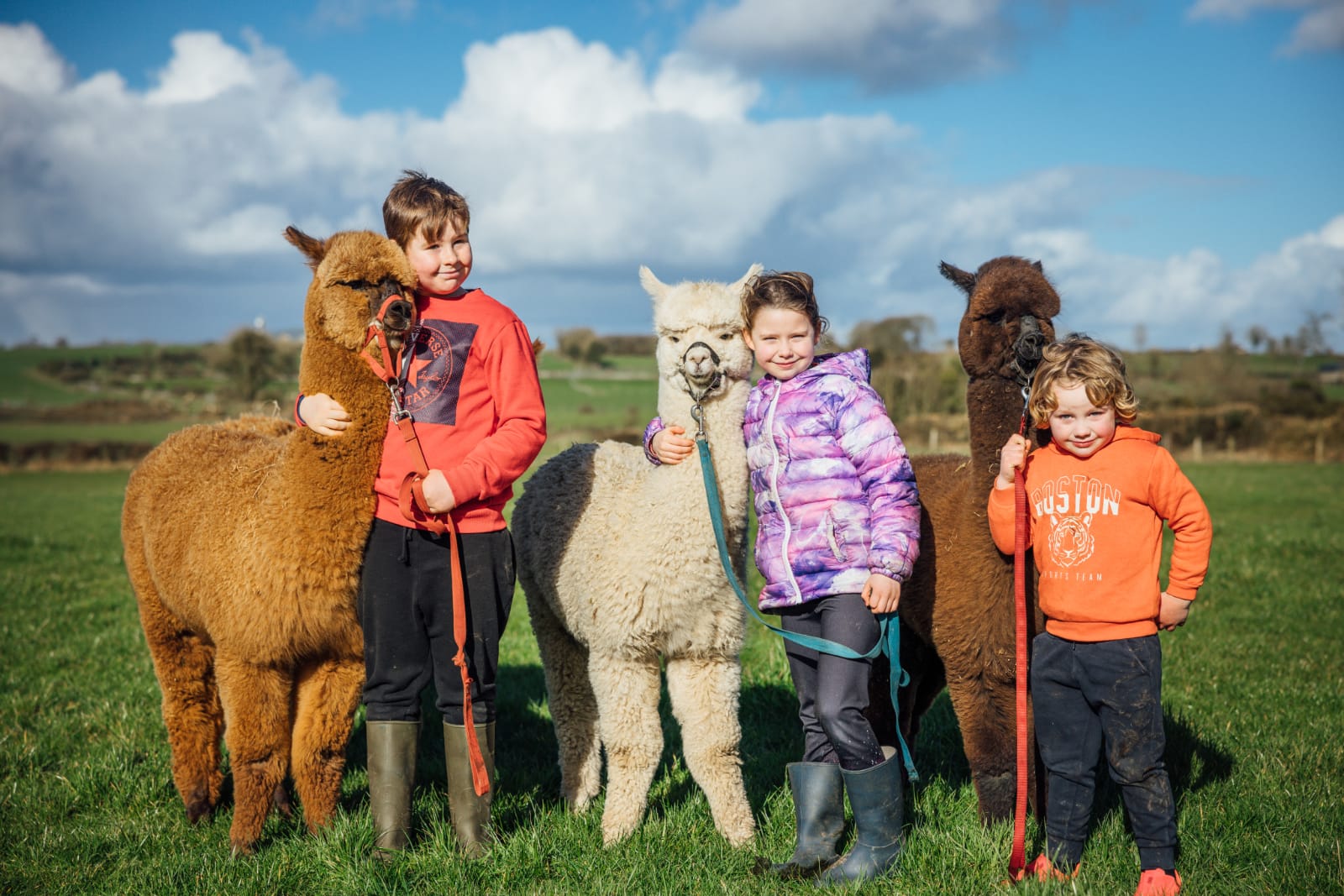 “If they are halter trained, ask to walk them. Look for someone who is a registered breeder with the Alpaca Association of Ireland. You should be offered and shown all the necessary husbandry advice. Remember that they will become stressed if kept alone for short periods. They should be kept in groups of three or more and they can run with sheep or goats.”

The Brooks family is in the early stages of developing an animal assisted therapy facility with the alpacas at Taughmaconnell. Alpacas are very calming to be around and offer a great way of teaching children about animals and their welfare, eliminating any fears they may have, according to Louisa.