What questions should you be asking when sourcing calves off-farm?

Rather than heading to the marts to source calves, some calf-to-beef farmers make the trip to dairy farms in pursuit of healthy calves to rear this spring.

This was one of the topics up for discussion this week on episode 3 of ‘The Calf Show’ series.

Speaking from a health point of view, Suzanne Naughton from MSD provided some great information and questions that farmers should be asking dairy farmers when sourcing calves off-farm this spring.

Health management of the calf

One of the first questions that Suzanne stated farmers should ask is if vaccines are used on the farm, and if so how are they managed? She explained:

“The first question would be to ask about the vaccination protocols and what diseases that they are vaccinating against – like IBR, BVD, etc.

“The better the vaccination protocol on a particular farm, the lower the disease prevalence will be on that farm. As a result, the calves born on that farm will have a lower exposure to any diseases that could potentially be there.

Also, ask if they are vaccinating the cows against scour; because if they are coming from vaccinated dams, there is less of a risk that there has been an outbreak of scour on the farm.

“Hopefully as a result you should be receiving a healthier calf.

“I’d query them on their colostrum management protocols as well. It’s very important that the calves you are getting are getting adequate colostrum within the first few hours and subsequently with transition milk.

“Good colostrum is the foundation for good growth and survival – if that is not done right from day one, you are going to be at a loss and you will be getting problematic calves that will be causing you headaches throughout the rearing stage.

“It’s also helpful to have an idea of the disease status on that farm – if they have had previous outbreaks of coccidiosis or cryptosporidiosis.” 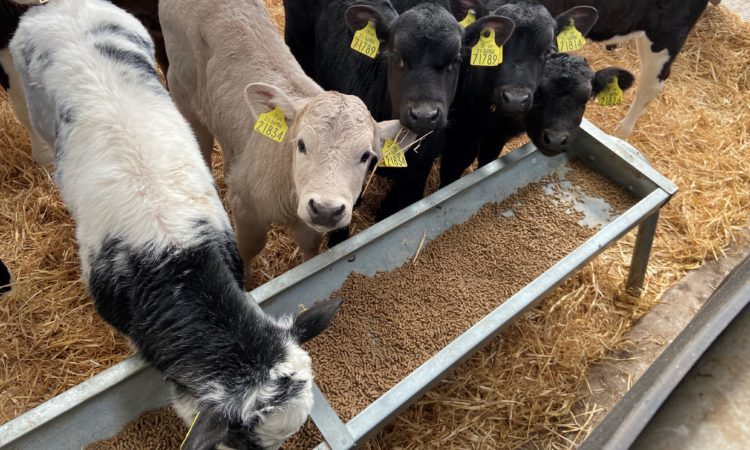 Breeding on the farm

Another useful advantage that farmers buying calves directly off dairy farms have is that they can view the cows that the calves are coming off.

You will be able to view the breeding of the cows and also potentially view the stock bull used.

If a stock bull is not used, you should query what AI sire was used during the breeding season, especially in the case of a beef sired calf. This will also allow you to view his traits on the Dairy-Beef Index.

Also speaking this week about the carcass traits farmers should be looking for in the sires used on in episode 1 of ‘The Calf Show’ series, Seán Cummins from Teagasc stated:

“There is huge variation in the bulls that are being used on dairy cows across the country. For the majority of Green Acres farms we are dealing with Holstein-Friesian sired calves.

“In terms of the carcass traits for the sires of these calves we would be looking at a carcass weight of zero. We don’t want animals coming in with negative carcass weights if we can avoid them.

For the early-maturing animals, we want to have a figure of +10kg of carcass weight [for their sires].

“The more genetic potential that we have in these animals, and if we can get them to reach their targets – we have a chance of making money.

“Unless we have the genetics right, and the correct potential in the animal – no matter what we do on farm – we are going to be at a stumbling block in terms of the ability of the animal to put on carcass weight and actually achieve a profit for farmers in the programme.”

Buying calves this spring - what price should you be paying?