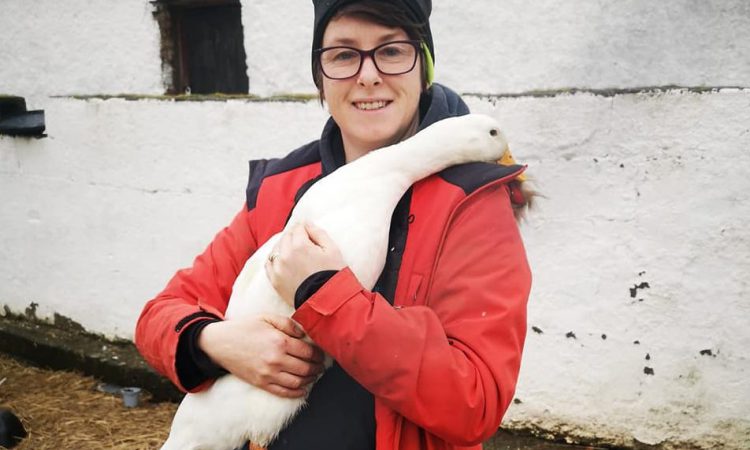 Meet Jemima, the doting duck who lives on a Wicklow farm. During these dark days, Jemima has been bringing a bit of Covid comfort to her owners by enveloping them in daily cuddles.

Jemima originally came to the 120ac Binions farm, just off the N11, to reside in the coop which is part of the waiting area at the Ballyhara equine assisted therapeutic riding centre, run by Tina Binions.

“We have specially trained horses and children with a broad range of special needs including autism; cerebral palsy; Down Syndrome; sensory processing difficulties; brain injury and anxiety, attend the centre. We address their needs such as physical, mental, emotional and social skills,” Tina said.

“I found upon observation that as the service grew, we needed to improve on time management. We came up with the idea of having a small petting area in the yard to make the children’s and parents’ waiting time easier and less stressful,” she said.

“My husband, Mark, built the coop on the farm and we made an area for the chickens, guinea pigs and ducks.

“Jemima, who was always very vocal, came with two other ducks who were very cruel to her. They were constantly pushing her around so I sent her to my sister-in-law’s house which is also on the farm,” said Tina.

“Jemima got bigger – too big for their enclosure. I sent the other two ducks back because the supplier had phoned me and apologised as they were actually two drakes.”

Tina took Jemima back a couple of weeks ago. “She was visibly very happy. Everyone commented on how happy she seemed. About a week-and-a-half ago, I went into the coop at feeding time and Jemima came waddling over and quacking at the top of her voice,” she said.

“I started chatting to one of the helpers in the yard. When I looked down, Jemima had squatted down at my feet and had her neck stretched out. It was the most bizarre behaviour I have ever come across,” Tina said.

I knelt down and started rubbing her neck and back and she reacted. So I picked her up and she wrapped her neck around mine and stayed there for a few minutes.

“Every day since, I go out and we have the same routine. She waddles over and quacks with excitement. When she is ready, I put her down, she flaps her wings and goes straight into her duck pond,” said Tina.

“Her legs were hanging down and she was really relaxed in my arms. I found it surreal to be honest but I went into the house thinking it was actually therapeutic. I thought if I felt like that what would it do to a child with sensory issues,” she said.

“She is warm, she is soft, and calm when being held. These are all very important elements in the service that we provide here. We are always looking for ways and ideas to address as many needs as possible in the children’s lives,” Tina said.

“Jemima is now on Instagram [jemima_cuddle_duck] and has a stream of followers who have said they look forward to watching her videos over their morning coffee. Interestingly enough, a few mums have asked if they can come visit her for a cuddle when lockdown is over.

“I can completely understand from an external eye this might come across as crazy and weird but at the end of the day, if a small little duck can bring big smiles and make a small positive change to someone’s day, then it has to be a good thing,” Tina remarked.

Having worked as an accounts assistant for many years, she revels in her new lifestyle. “I got sick after my daughter was born 10 years ago and had to leave my job. Between raising two children and helping my husband with the farm I was slowly getting itchy feet and was desperately yearning to do something else with my life.

“I had studied applied physics in college but could never see a future in it. I worked for a magazine in Dublin but the entire time I was unhappy. I found working in an office environment difficult,” Tina said.

“When my daughter got a little older, I wanted to take a more active role on the farm. I realised that I was surrounded by horses and was afraid of them. So I started taking lessons in horse handling and found that I had a natural ability with them.

“Taking this newfound confidence, I went to volunteer with my mother-in-law – she volunteered for 35 years – in a local riding for the disabled group every Tuesday morning for about four years. I was a little scared as the children who attended were profoundly disabled but every week I became more and more in love with the idea of being with these children,” Tina said.

I slowly started to take the idea home with me that maybe I could provide the same service on our farm. Fast forward 10 years I was approached by different people asking me if there was a place locally where children with special needs could go horse riding.

“That was my light bulb moment. I went to my husband and said: ‘I know what my calling is.’ I applied to train as a therapeutic riding coach and set the farm up to take clients in. We have been providing this service going on four years now and we have a waiting list of families wanting to bring their children.”

With the bothersome drakes banished, Jemima is taking to her new role on the farm like a duck to water, sparking joy in all who come in contact with her. 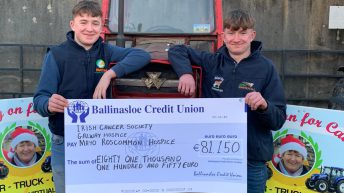