A number of spring lamb processors have moved to drop prices this week, with base quotes currently ranging from 470-490c/kg.

Kepak Athleague lead the field in terms of prices and it is offering a base price of 490c/kg, while Kildare Chilling is currently offering 480c/kg for new season lamb.

The two Irish Country Meat’s plants are operating of a 470c/kg base price.

Last week, most factories were quoting a base price of 490c/kg for spring lambs, but the end of Ramadan combined with lower fifth quarter prices have been blamed for this week’s price drop.

One spring lamb buyer told Agriland that the weaker Sterling is having a negative impact on the returns from sheepmeat sold into the UK.

Another procurement manager also said that fifth quarter product prices have dropped dramatically over the past year and this is impacting on lamb price.

There has also been some variation in cast ewe prices this week and farmers selling cast ewes can expect to be offered a base price of between 230-250c/kg for fleshed lots.

The number of spring lambs slaughtered in Department of Agriculture approved plants jumped 14.6% during the week ending July 3.

During the week ending July 3, 49,630 spring lambs were slaughtered in Ireland, just over 6,300 head higher than the week before.

However, despite the jump in spring lamb throughput, the number of cast ewe and ram slaughterings declined by 10% or 722 head on the week before.

Meanwhile, hogget numbers continue to tighten, with just 605 head slaughtered in Department approved plants during the week ending July 3. This is 323 head lower than the week before. 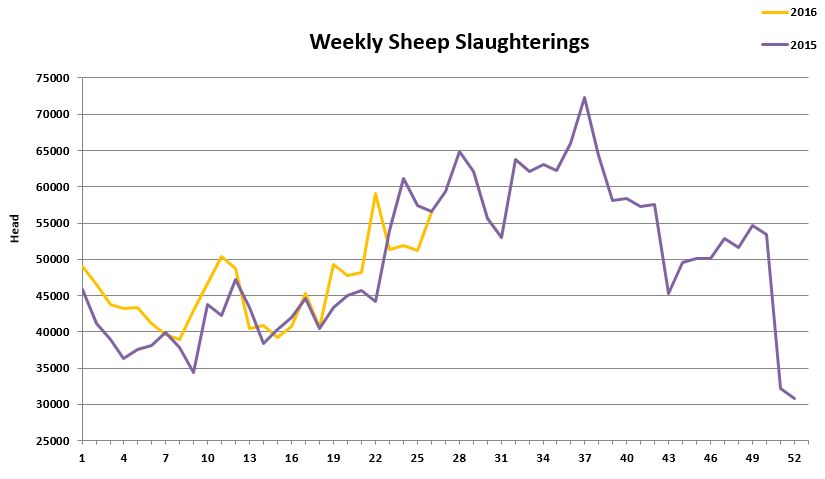 Meanwhile, figures from the Department of Agriculture also indicate that the number of sheep slaughtered in Ireland so far this year is 5% (56,690 head) higher than the same time in 2015.

The majority of this increase is due to a jump in hogget slaughterings, which are up by 7% or 42,043 head so far this year compared to the corresponding time last year.

It also shows that the cumulative number of cast ewes and rams slaughtered this year has increased by 32,864, while spring lamb throughput decreased by 5% or 17,805 head.

According to Bord Bia, there was some upturn in the British sheep trade last week due to currency fluctuations making UK lamb exports more competitive.

The SQQ live price for lamb in England and Wales was making the equivalent of around €5.00/kg deadweight last week.

Last week, the French sheepmeat market benefited from the end of Ramadan, but it is expected to ease with an anticipated drop in demand due to summer holidays.

According to Bord Bia, plentiful supplies of UK lamb have been reported on the French market, while most retail promotions continue to centre of French beef and pork.

However there were some retail promotions on both domestic and imported forequarter lamb.

What is the ideal Brexit model - from an Irish point of view?