Now this is an impressive use of tractors and straw bales at the Tour de France!

As the Tour de France rolled along last week some innovative farmers caught the attention of NBC Sports with their straw bale art.

As the cyclists travelled from Limoges to the ski resort Le Lioran NBC sports spotted a model bicycle made up of tractors and a collection of straw bales.

“We see here some multi-coloured agricultural art, ten tractors making up our wheels and the black hay bales wrapped up make a nice touch,” said the NBC commentator.

The impressive piece of art was spotted early in the fifth stage before the mountains came into view and the cyclists had to deal with some steep climbs.

This project has been replicated by agricultural fans of the Tour De France in the past with one masterpiece comprising of just tractors and another including a collection of bales and tractors from 2011.

But this is not the first time farmers have chosen to channel their creative ideas using straw bales.

In recent years Mountbellew farmers and agricultural contractors Michael and Martin Fleming came up with an inventive new way of advertising straw bales for sale.

With the help and imagination of Michael’s children they created a massive teddy bear in a field outside Mountbellew out of five round and eight square bales.

The Teddy bear sculpture attracted huge attention in North Galway with motorists going out of their way to pass by the creation.

The project involved the help of the whole family, with black spray cans used to paint the eyes ears and feet of the bear which stood at around 20 feet high. 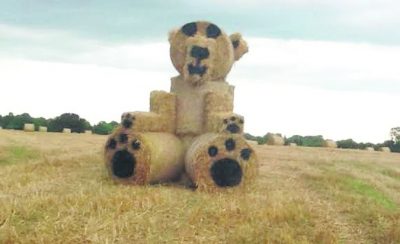 While last year a photo of an articulated lorry made up of a mixture of of round, square, wrapped and unwrapped bales was snapped just outside Thurles Co. Tipperary.

The close to full size model was constructed to promote the Tipperary Truck show which takes in August this year. 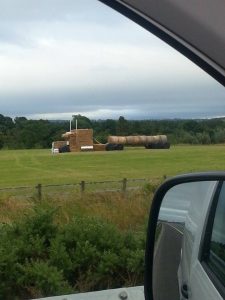 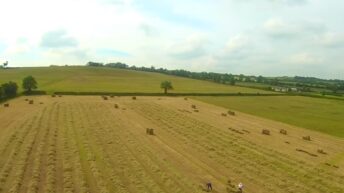 Video: Baling hay for the Aga Khan in Laois