Pig shows up at US polling station – not the first time an animal has turned up unexpectedly!

This week at the New Hampshire in the US, a pig showed up at a polling station where voters were deciding the Republican and Democratic candidates to go forward for the US Presidential election.

The 600-pound swine wandered to the Pelham voting centre and one local caught great video footage, which shows the pig with police officers outside the polling station where officers keep tabs on the pig.

The pig doesn’t try to enter the polling station to vote – maybe it wasn’t sure who to vote for!

Farm animals escaping and ending up in strange places is nothing new.

Only last month, a cow managed to escape from an abattoir and made her way to the streets of New York.

The cow ran down several streets before it went into a car park where it was put into a truck and brought back to the processor.

Sky News reported at the time that the animal fled from Archer Halal Live Poultry and Meat Market on 165th Street in Queens.

Police officers from the 103rd Precinct helped to get the cow back to the processor and it seems they’re no stranger to finding farm animals in the city.

Only weeks before the cow escaped, the Anti-Crime Unit found a goat in the city. 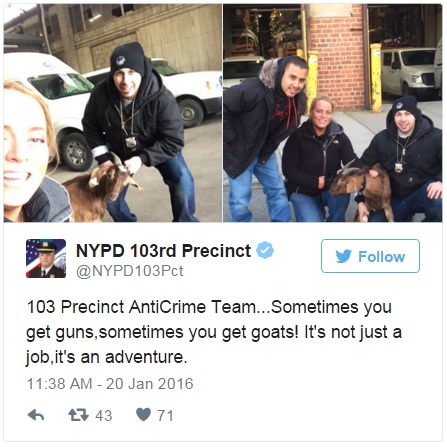 Officers then wanted to save the goat, which is believed to have also escaped from a slaughterhouse, so they paid $40.00 for the goat and brought it to a sanctuary.

Staying in the US, last summer some 2,200 piglets escaped from the truck that was carrying them after it overturned.

Multiple agencies were called to the scene to help round up the loose pigs however, some pigs sadly died in the crash and the rest were taken to the local fairgrounds where they were picked up the next day.

Meanwhile, closer to home last November a Belgian Blue caused chaos on the M50 after it managed to find its way onto the busy road.

At the time, AA Roadwatch reported that the cow was on the southbound lane near the Bray North exit.

Luckily Gardai ‘remoooved’ the cow before she could cause an accident on the road.