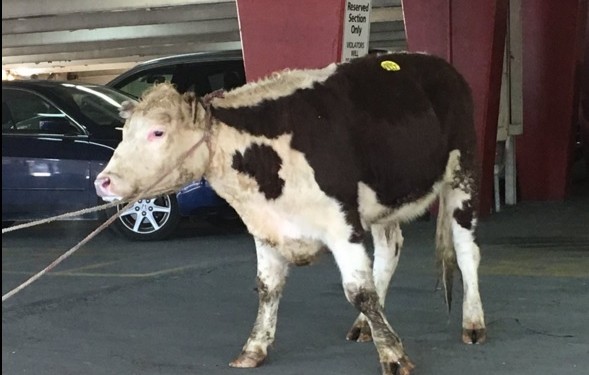 A cow recently took to the streets of New York after it managed to escape from a meat processor in the Queens area of the city.

The cow ran down several streets before it went into a car park where it was put into a truck and brought back to the processor.

Sky News reported that the animal fled from Archer Halal Live Poultry and Meat Market on 165th Street in Queens.

The runaway cow was videoed on a police car camera as crossed a road in New York.

The local police department, the NYPD 103rd Precinct tweeted: “Yes, you heard right! Cow loose – Jamaica Queens. All officers safe. No injuries. Thank you all for your patience.”

Sky News also tweeted the video of the camera that caught the cow running across the road.

It appears it’s not the first time that officers at the 103rd Precinct have helped out with finding animals.

Earlier this week, officers from the Anti-Crime Unit found a goat in the city.

Officers then wanted to save the goat, which is believed to have also escaped from a slaughterhouse, so they paid $40.00 for the goat and brought it to a sanctuary.

All in a days work for New York police officers!