Lower milk prices in 2015 have hit the profits produced by each cow in the Teagasc/Glanbia Monitor Farm Programme, according to Teagasc’s Dairy Advisor Richard O’Brien.

O’Brien, the joint-lead on the programme said that the 11 farms involved have recently completed profit monitors.

The results of these profit monitors show that the average net profit per cow across all the farms has dropped by €94/head on 2014 levels.

These figures also show that the gross output has dropped by 6.46c/L compared to the same period in 2014.

However, O’Brien said that the drop in profitability was not as high as first expected, due to a good grass growing year and an increase in the average milk yield of cows on the monitor farms.

Every farm produced more milk at a lower milk price, if these farms didn’t produce more milk the profitability per cow would have dropped by more.

He said that the cows in the monitor farm programme produced 500L more milk in 2015 compared to 2014, with the average yield sitting at about 5,500L/cow.

O’Brien pointed out that the increase in milk production along with a higher stocking rate on the milking platform has diluted the costs of production over a larger volume of milk.

He also said that the profit produced per hectare will be one of the most important things for the monitor farms going forward. 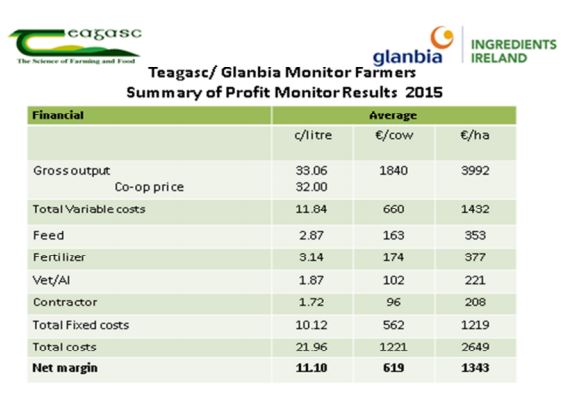