Dairy farmers participating in Teagasc’s PastureBase Ireland programme will get an extra 10-14 days at grass this winter compared to last year, according to Teagasc’s Michael O’Donovan.

Speaking to Agriland recently, the Head of Grassland Science in Teagasc Moorepark said that this has occurred due to high growth rates in November of this year.

According to O’Donovan, there is a lot of variation in terms of the Average Farm Covers (AFC) on many farms participating in this programme.

There is a lot of grass out there, some farmers are better off than others when it comes to closing covers.

“The Average Farm Cover on the PastureBase farms currently stands at 727kg DM/ha (dry matter/ha), this ranges from 615-1,035kg DM/ha.

“Data from PastureBase indicates that there is probably 10-14 days more grass this winter compared to this time last year,” he said.

Furthermore, he added, that most farmers did meet the target of having 60% of the farm grazed by November 1.

Most farmers had 60% closed by November 1 and were on track for closing, but higher growth rates since mean it could be a little later this year.

He also said that these farms have very little room to pull out concentrates to try and increase the grass proportion of the diet.

“There is very little concentrates being fed on PastureBase farms at the minute, the highest farm currently sits at 3kg/cow/day. There is still a lot of grass in the system.”

According to O’Donovan, grass growth rates  across the PastureBase farms have also been significantly higher this year compared to 2014.

“The average PastureBase farm has grown 14t of DM/ha this year, and they look set to produce more.

“Farms down south are expected to grow 220-230kg of DM/ha between now and next spring while farms further north will grow 100kg of DM/ha,” he said.

He added the growth rates on PastureBase farms are currently sitting at 19kg of DM/ha/day with dry matter levels sitting at 13%. 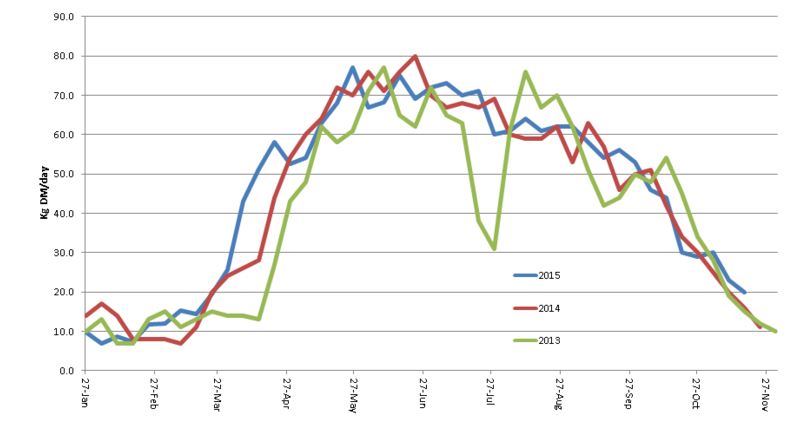