The cumulative throughput of sheep at sheepmeat export plants has dropped by 1%, figures from the Department of Agriculture show, as total throughput currently stands at 2.26m head.

Total spring lamb throughput to Irish export plants has increased by 6% or 70,734 head to November 15, 2015, compared to the same period in 2014, with a good trade for these lambs reported.

There has also been a 13% reduction in the total cast ewe and ram kill, with 41,338 fewer of these animals going to meat export plants in 2015 compared to the same period in 2014.

Figures from the Department of Agriculture also show that the total number of light lambs slaughtered has also fallen by 1,473 and stands at 1,576 to date in 2015. 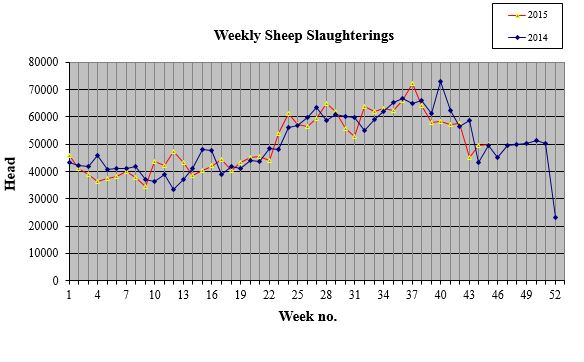 Last week’s national sheep kill currently sits at 50,073, figures from the Department of Agriculture show, this is an increase of 555 from the week ending November 8, 2015.

Spring lamb throughput has increased by 1,525 head on previous week’s and stood at 43,835, this is a rise of 4%, with good demand for these lots in factories.

Figures from the Department of Agriculture also show that there were 98 hoggets slaughtered last week, which is a fall of 5 from the week ending November 8.

There has been a 13% reduction in the cast ewe and ram slaughterings this is a week-to-week drop of 915 head.

The sheep trade improved this week due to tighter numbers and demand remaining relatively steady, according to Bord Bia.

Base quotes for lambs were generally making between €4.50-4.70/kg while higher quotes were reported for selected lots, cull ewes made €2.50-2.60/kg.

Despite this slight improvement in prices, the trade across the main export markets remains mixed, according to Bord Bia.

There has been some uplift in the sheep trade in Britain on the back of seasonal demand coupled with tightening numbers, with British lambs currently making the equivalent of around €4.92/kg dead weight.