12 raised bog sites to benefit from EU funding of €5.4m

A new project worth over €5.4m for the restoration of Active Raised Bog in Ireland’s Special Area of Conservation (SAC) Network, has been approved by the European Commission.

The project will operate from 2016 to 2020, according to the Department of Arts, Heritage and the Gaeltacht.

It seeks to improve the conservation status in Ireland of active raised bog, a priority habitat under the Habitats Directive, using best practice conservation actions.

According to the Department, the project will support the restoration of active raised bog in 12 SAC project sites throughout Ireland.

A project team is being recruited to implement this project and will be consulting with local communities in the relevant areas.

The 12 SAC sites which will be part of the Restoring Active Raised Bog LIFE project are as follows: 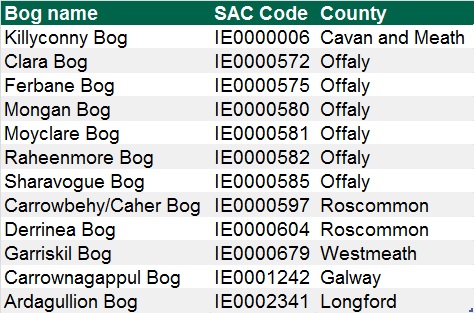 Speaking today, the Minister for Arts, Heritage and the Gaeltacht, Heather Humphreys said that the project will provide a significant financial injection for the conservation of Ireland’s protected raised bogs.

She also said that it will provide benefits to rural communities and also create employment opportunities.

“The project will also be a very positive step forward in efforts to reverse the decline of active raised bog in Ireland and will support the measures of the National Peatlands Strategy and the National Raised Bog SAC Management Plan.

“This project will be undertaken with the consultation and involvement of local communities,” she said.

I am hopeful that this project will raise awareness of the importance and uniqueness of Ireland’s raised bogs and will help address the urgent need for conservation and restoration measures.

In 2014, an application was made by the National Parks and Wildlife Service (NPWS) of the Department of Arts, Heritage and the Gaeltacht to the EU LIFE programme to provide funding support for this project.

The European Commission has now agreed to provide almost 75% co-funding (€4.056m) for this €5.4 million project which is being undertaken by the Department.

SACs are selected to protect habitats and species that are rare and threatened at a European scale.

Some 685ha of raised bogs to be restored across seven counties