Online selling resulting in better prices at some marts – MartEye

The online sale of livestock at some marts across the country has resulted in better prices for some farmers, according to online auction provider MartEye.

In the three-day period after the implementation of Level 5 Covid-19 restrictions, marts using MartEye sold over €4 million euro worth of cattle.

There is concern among farmers and animal owners that the restriction on attending marts in person is causing loss of income and potential prices.

However, co-founder of MartEye Ciaran Feeney said: “From our viewpoint, ‘online-only’ is working this time around with many of our marts reporting similar or better prices compared to the same period last week.”

The provider is urging the farming community not to fear bringing animals to a mart for sale or bidding for animals as MartEye has successfully run over 1,300 sales since its inception without disruption using its cloud-based platform.

The system has been built to support up to 3,000 simultaneous auctions, therefore ensuring a system which does not falter.

Feeney said: “Our marts pay a flat monthly fee as opposed to a pay-per-animal sold online model so we are prepared for both online only and dual-bidding systems. We believe the fairest prices are obtained when the market is accessible and trusted by all.”

MartEye has run 36 sales across 16 marts in the Republic of Ireland without any significant issue. In places where slow rural broadband has posed a problem, the company has brought marts online with 4G mobile broadband instead.

Ballybay mart manager Adrian Grimes said: “We were all anxious about our first online-only sale last Saturday but our prices were actually up 16% on average compared to the previous Saturday and we achieved a clearance rate of 96%.”

Other marts such as Blessington and Kingscourt also reported similar clearance rates with the majority of marts reporting a “better” or “steady” trade compared to the week prior to Level 5 restrictions being imposed.

The Irish Creamery Milk Suppliers’ Association (ICMSA) has called for allowances to be made for 25 people to physically attend mart sales.

The association’s president Pat McCormack said: “We’re just conscious that this is traditionally a very busy period for weanling producers when competition for cattle is critical, and we think that if their trade could be facilitated – subject, of course, to observance of all Covid-19 guidelines – then that would be a step in the right direction.” 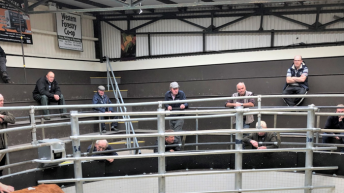 Over 75% of marts have online bidding in place – ICOS