Mostly dry this week, but frosty at night – Met Eireann 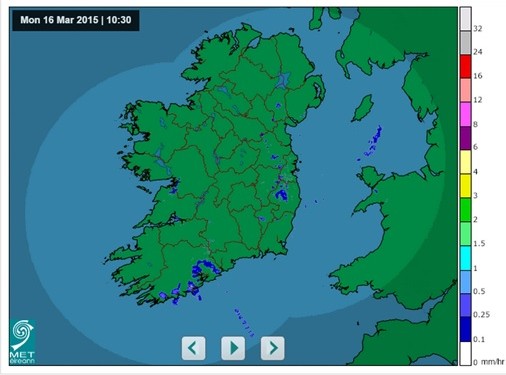 Tonight (Monday) will be cold with some long clear spells while a few light showers are still possible in parts of the south and east, Met Eireann says.

It also says frost and fog patches will form as temperatures fall to between -1 and +2 degrees in light easterly breezes.

Tomorrow, Saint Patrick’s Day, will bring a mix of bright and cloudy spells and occasional scattered showers, but many areas will stay dry, it says. There will be highs of 7 to 10 degrees in light southeast or variable breezes.

Met Eireann says it will be dry and cold on Tuesday night with temperatures falling below zero in many areas with frost and fog patches developing, however things are to improve on Wednesday.

“High pressure will move in over the country on Wednesday to produce a dry day with bright spells. Highs of 9 to 11 degrees in light breezes. Cold overnight with more patches of frost and fog developing,” it says.

Thursday will be similar to Wednesday, there will be highs of 9 to 11 degrees and it will be another cold night with yet more patches of frost and fog, it says.

Friday, it says, will start off dry but during the afternoon a band of rain will move into the north coast and it will become cooler as northwesterly winds move over the country. Rain is to spread further south Friday evening but it will break up as it does so, Met Éireann says.

On Friday there will be highs of 8 to 10 degrees and a milder night promised for Friday, with Ulster most at risk of frost, it says.