The dairy research herd at UCD’s Lyons Estate, consisting of 60 cows, has just completed its first full year of production.

Delegates at the week’s Irish Grassland Association Dairy Conference, which was sponsored by Yara, were given a briefing on the herd from Dr Karina Pierce of the UCD School of Agriculture and Food Science.

Pierce told the 550 delegates in attendance that the Lyons’ herd sits somewhere in the middle of low-input and high-input dairy systems.

“We are not to the extreme left with a low-input system which maximises grazed grass with very low concentrate supplementation.

“We are not at all to the far right in terms of a TMR (total mixed ration) or a confinement system, which is very risky in the current environment we are in.

“We are sitting in the middle. We are looking at high solids output per hectare, we are maintaining a significant focus on grazed grass and home-grown forage with a moderate use of purchased inputs,” she said.

Why was the herd established?

Pierce explained that the herd was established to examine an alternative method of increasing output in a post-quota environment when the dairy business is operating within a fixed land bank.

The question in that scenario is: would a higher input/output spring-calving system prove attractive where land is the limiting factor?

“The main aim of the research over the next few years at Lyons is to evaluate the feasibility of this high input/output grazing system within a limited land holding scenario.

“The focus is on maximising milk and milk solids from the existing land holding and this involves output per cow and high stocking rates on the milking platform to ensure a high output per hectare,” she said.

Pierce added that this is done most efficiently through the use of grazed grass, home-grown silage and the strategic use of concentrate or meal supplementation.

“Traditionally when we think about high-input systems, we tend to think of complexity of TMR and confinement systems.

“But the Lyons system was based on grazed grass, silage and meal being fed trough the parlour,” she said.

This keeps the cow’s diets as simple as possible and uses only the feedstuffs available to most of the farmers in Ireland.

How where the cows selected?

The project also hopes to examine the flexibility high EBI cows offer when it comes to matching concentrate input with grass growth and the cow’s nutritional requirements for milk production.

The 60 cow project herd at Lyons Estate, which is grazed on a 17ha milking platform, has an average EBI of €145.

“The cows in the herd are in the top 5% of the cows in the country based on the EBI figures from the January evaluation,” she said. 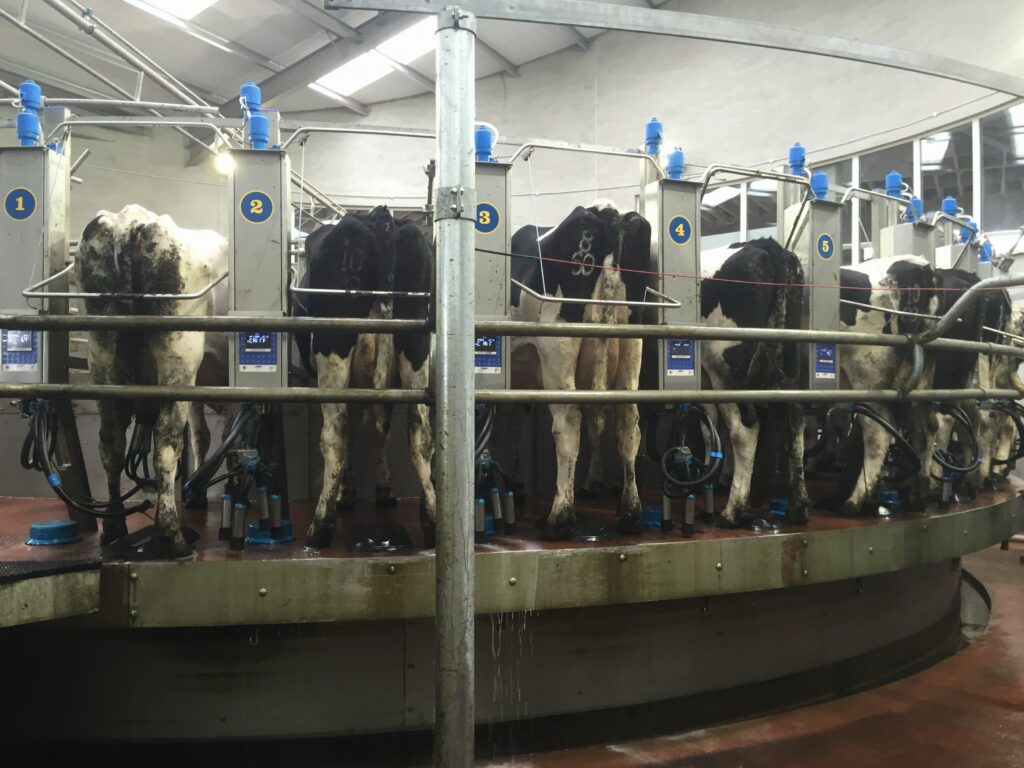 The Lyons herd was traditionally a high-output liquid milk herd, she said, and since the EBI was introduced the farm has focused on breeding using this index.

And given that the herd at Lyons Estate was traditionally made up of high-out, high-EBI cows, Pierce said it was a natural progression for the project to focus on the production capabilities of these cows rather then go down the cross-bred route.

Pierce also said that grass is a very good feed stuff and farmers should make the best use of it – no matter what system they operate.

And although the cows in the herd are fed nearly 1.5t of concentrates each year, she said this is required to meet the genetic production capabilities of the animals in the herd.

Given this potential, the cows peak at about 35L of milk per day and as a result it is very difficult to achieve that level of output from grazed grass alone, she said.

So to ensure that the cows meet their milk production capabilities, Pierce said the concentrates are front-loaded in the cows diets during the earlier stages of lactation.

That involves feeding up to 8kg of meal for that period of 20-60 days post calving and beyond.

“After day 120, we start to drop the meal supplementation rate when demand from the cow starts to drop and there is good grass growth on the farm.

“It is a struggle to meet the energy requirements of the cows even with that level of meal.

“But if you are putting a lot of concentrate into cows, you have to be getting output to justify that or the figures just don’t stack up,” she said.

The UCD Assistant Professor added that silage is cut out of the cows diets once the cows go out to grass, as grass is a better quality feed to offer to these animals.

We are targeting high intakes at grass and we are feeding high levels of concentrates at that time.

“We are front loading that so we are getting a high peak which is sustained to give a high yield over the entire lactation,” she said.

In total, she said, these cows eat in the region of 6t per year consisting of grazed grass, silage and concentrates.

Although finalised financial and production results are not yet available, Pierce said that the average yield per cow in 2016 was 7,400L over a 305 day lactation.

However, she added, the farm faced a difficult grass growing year in 2016, with cows housed in late October – three weeks earlier than the targeted closing date of November 21.

This was a strategic decision in order to have grass available for the cows next spring, she said.

And with all systems research work, she said it will take several years for concrete conclusions to be generated as a number of factors could impact on a single year’s results. 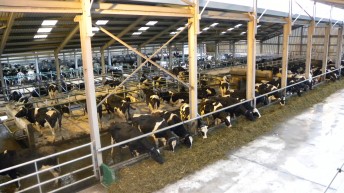 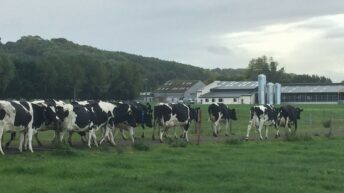