Sean O’Donnell milks 120 cross-bred cows in Co. Mayo with two straight forward mantras of turning grass into cash and being brilliant at the basics.

After working alongside his father for six years, O’Donnell took over the operation in 2008. Prior to taking over, the father and son team were milking 44 cows on a 22 hectare grazing platform.

O’Donnell mapped his expansion journey to the delegates at today’s conference.

“I have expanded the farm over the last few years and were are now milking 120 spring block calving cross-bred cows.

“I farm 75 hectares, of which 50 hectares are owned and the remainder is leased or rented,” he said. 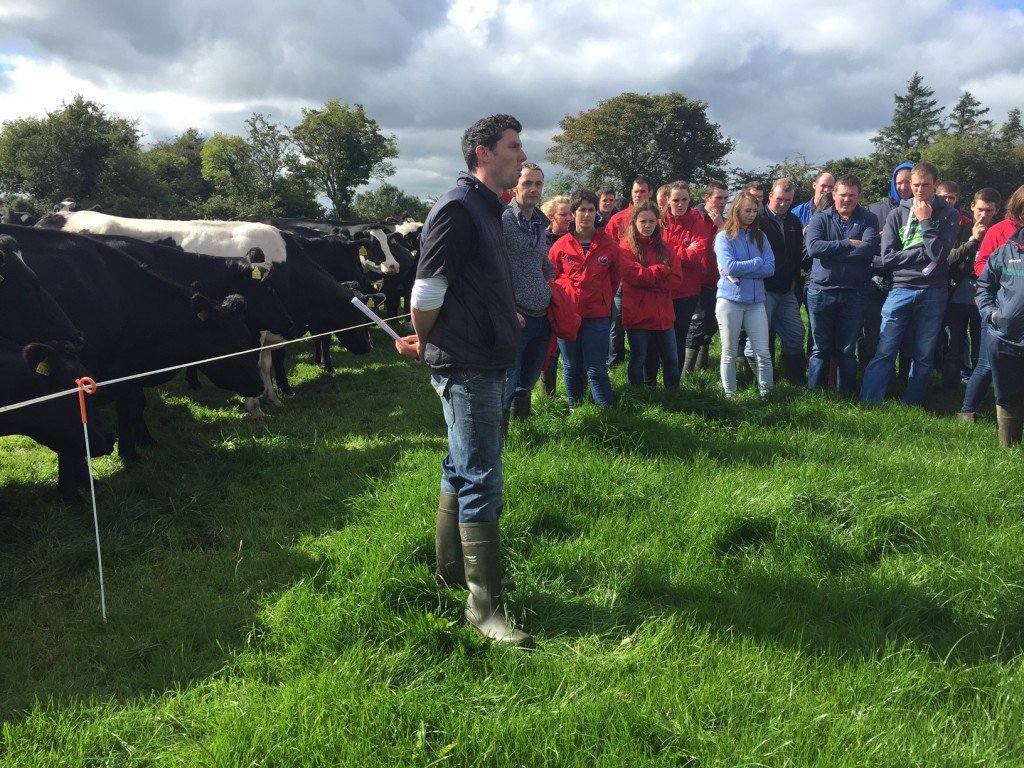 Sean O’Donnell speaking at a farm walk on his farm

O’Donnell explained that the home farm consists of three main land parcels, with the 34 hectare milking platform being split by a main road.

The milking platform is highly stocked at 3.52 cows/ha and is used solely for producing milk.

“We are currently growing 14t of grass per per hectare and the cows are producing 440kg of milk solids per head with 650kg meal,” he said.

The Mayo-based farmer added that his focus since he started farming is being brilliant at the basics, a mantra he picked up from participating in a discussion group facilitated by Matt Ryan.

He also discussed some of the key performance indicators from his herd.

Over the last few years, he said, he has tried a number of different strategies to maximise resources and develop and efficient system on the fragment farm.

“In 2012 I was unable to source enough land for rearing heifers away from the milking platform.

“Rather than exaggerate my fragmentation issue further, I approached a friend of mine who was exiting milk production.

“He lives 40 minutes away and I asked if he would be interested in contract rearing heifers. He duly agreed and I send him my one-to-two year old heifers which he winters, grazes and puts in calf.

It has freed up my time to focus on cows and grass and eliminates an extra complication to the work load.

“I still rear my calves until they are 10-months-old and then swap them with the in-calf heifers,” he said.

Another tactic used by O’Donnell is contracting out dry cow silage production to under stocked beef farmers in the locality.

“It acted generally as a means of securing a feed bank without the hassle of commuting to outside blocks of land,” he said.

He added that surplus bales are taken from outside blocks at a cover of about 2,000-2,200kg DM per hectare to buffer feed cows when cows run short of grass.

Developing an outside block

The Mayo-based farmer also discussed his plans to expand his cow numbers to 230 cows through the development of a rented block.

“This farm is 40 hectares and is three miles from my home farm. There is currently only a four bay slatted shed on it.

“My intention is to construct a parlour, roadway and paddock system on the farm and use it as a second milking block.

“All cows will be wintered and calved on my home farm so from and infrastructure point of view, setting up this farm will be fairly straight forward,” he said.

He added that a husband and wife team will be employed to contract milk on this farm.

“Essentially they will be self-employed contract milkers who will have responsibility for milking duties, moving fences, AI and hoof care.

“They will also carry out approximately 25% of the milking on the home farm,” he said.